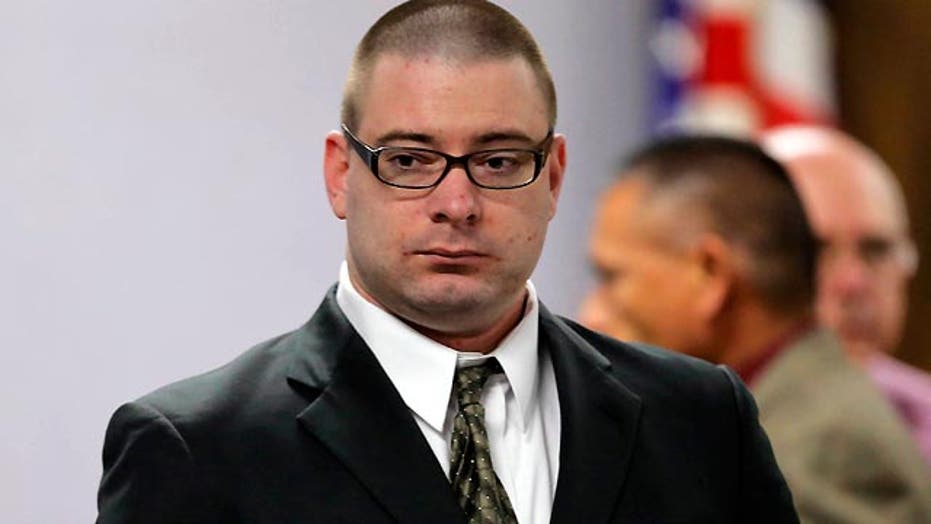 A key prosecution witness told a Texas jury Friday that he overheard a former Marine say he shot Chris Kyle after the "American Sniper" hero ignored him.

Kyle and a buddy were gunned down at a rural Texas shooting range. The accused gunman Eddie Ray Routh, 27, claims he was insane at the time of the 2013 shooting.

"I heard Mr. Routh say, 'I shot them because they wouldn't talk to me,'" former Erath County sheriff’s deputy Gene Cole testified.  Cole said Routh made the admission after authorities jailed him for the shootings.

Cole, who is now a police officer with another agency, quoted Routh as saying he was riding in the back seat with Kyle and the other man. They were headed to the shooting range and Routh complained nobody would talk to him, the witness said.

"I feel bad about it, but they wouldn't talk to me. I'm sure they've forgiven me," Routh said, according to Cole's testimony.

The testimony may help the prosecutors in suggesting a possible motive for the killings.

In other testimony Friday, a Texas Ranger testified that authorities found marijuana, a near-empty bottle of whiskey and anti-psychotic medication while searching Routh's small, wood-framed home in Lancaster after the shooting. Routh's uncle testified that he'd smoked marijuana with Routh the morning of the shootings.

The jury has heard prosecutors describe Routh as a troubled drug user who knew right from wrong. Criminal law experts say the case hinges on whether the defense can prove Routh did not know that the killings constituted a crime.

His defense attorneys have said Routh, who was diagnosed with post-traumatic stress disorder and was taking anti-psychotic medication, was insane when Kyle and Littlefield took him to a shooting range to provide support and camaraderie. Routh, his lawyers say, believed the men planned to kill him.

Because Routh was at a shooting range and both Kyle and Littlefield were armed, "it's an easier case than others for the proposition that he believed they were about to kill him," said George Dix, a criminal law professor at the University of Texas, Austin.

If convicted, Routh faces life in prison without parole. Even if he's acquitted, Routh would likely remain in custody. The Texas criminal code stipulates that in cases involving violent crimes where defendants are found not guilty by reason of insanity, the court can initiate civil proceedings to have them committed.

The case has drawn intense interest, largely because of the Oscar-nominated film based on Kyle's memoir that details his four tours in Iraq.

Erath County District Attorney Alan Nash said during the trial's opening statements that the evidence would show that mental illnesses "don't deprive people of the ability to be good citizens, to know right from wrong, to obey the law."

Routh's mother had asked Kyle, a former Navy SEAL whose wartime exploits were depicted in his 2012 memoir, to help her son overcome troubles that had at least twice led him to be admitted to a psychiatric hospital. Routh had been a small arms technician who served in Iraq and was deployed to earthquake-ravaged Haiti before leaving the Marines in 2010.

The trial in the Erath County Courthouse in Stephenville resumes Monday, President’s Day.