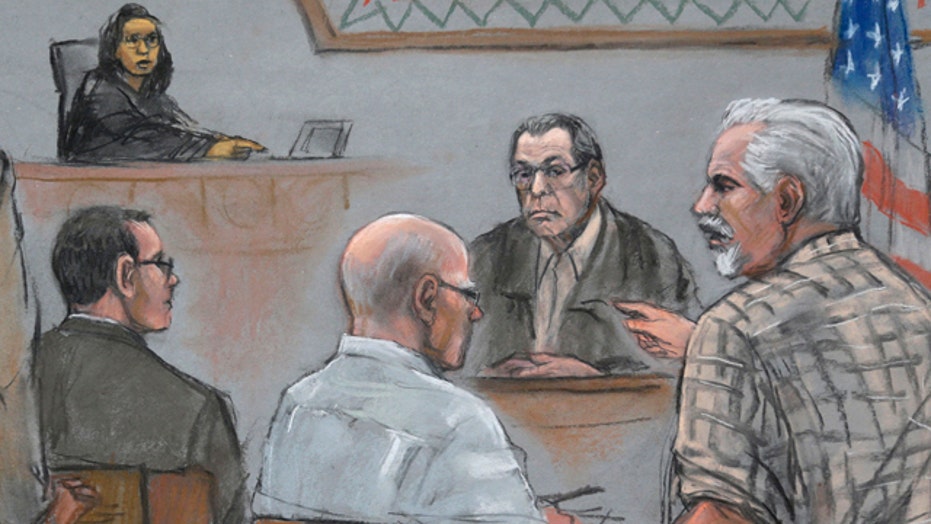 BOSTON – A real estate developer on Thursday described a harrowing encounter with James "Whitey" Bulger, recounting how the reputed gangster shoved a shotgun in his mouth and threatened to kill him and his family if he did not pay $200,000.

Richard Buccheri described the 1986 meeting while testifying in the racketeering trial of Bulger, who is charged with participating in 19 killings during the 1970s and '80s, as well as numerous extortions while he allegedly led the Winter Hill Gang.

Buccheri, 73, elicited gasps from spectators in the packed courtroom as he relayed how Bulger first slammed his hand on a table in anger, then threatened him with two different guns.

Buccheri said he was summoned to meet with Bulger after he gave advice to a neighbor who was involved in a dispute over the property line between his property and another neighbor's property. He learned later that Kevin Weeks, one of Bulger's close associates, was in the process of buying one of the properties.

Buccheri said that when he walked into the meeting, Bulger was sitting at a table.

"We sat down and Mr. Bulger says to me, he says, 'You know, Rich, sometimes you could keep your mouth shut,'" Buccheri said.

He said Bulger then pounded the table with his hand and said, "Do you know that Kevin Weeks is my surrogate son?"

"With that, he takes the shotgun that was on the table — he sticks it in my mouth," Buccheri said.

He said Bulger then told him he was not going to kill him then, but said, "It's going to cost you."

When Bulger told him he would have to pay him $200,000, Buccheri said he expressed surprise. He said Bulger then put a .45-caliber handgun to his head and said, "If you don't pay me in 30 days, I'm going to kill you and your family."

Buccheri said Bulger told him to make arrangements to pay his partner, Stephen "The Rifleman" Flemmi, and he later gave Flemmi a check for the full amount.

Buccheri said the meeting took place at a cabana behind Flemmi's mother's house in South Boston. Years earlier, Buccheri had built the cabana at Flemmi's request. Flemmi testified that the gang kept a stockpile of guns in the cabana, in a space he cut into the wall.

During cross-examination, Bulger's lawyer Hank Brennan focused on Buccheri's long friendship with John Martorano, a convicted ex-hit man for Bulger, and James Martorano, his brother and a Bulger associate.

"I really didn't know what they did for a living," Buccheri said, after acknowledging that they were close friends and that he had contact with John Martorano while Martorano was a fugitive.

Assistant U.S. Attorney Brian Kelly followed up by asking Buccheri who put a gun in his mouth and who threatened his family — the Martoranos or Bulger.

Bulger, now 83, was one of the nation's most-wanted fugitives after fleeing Boston in late 1994 ahead of an indictment. He was finally captured in Santa Monica, Calif., in 2011.

Bulger's lawyers will begin presenting their own witnesses immediately after the prosecution rests. On Thursday, the defense witness list was whittled down to a maximum of 16 after Bulger's lawyers said they no longer planned to call some people and Casper ruled that testimony from several others was irrelevant.

It is still unclear whether Bulger will take the stand in his own defense.