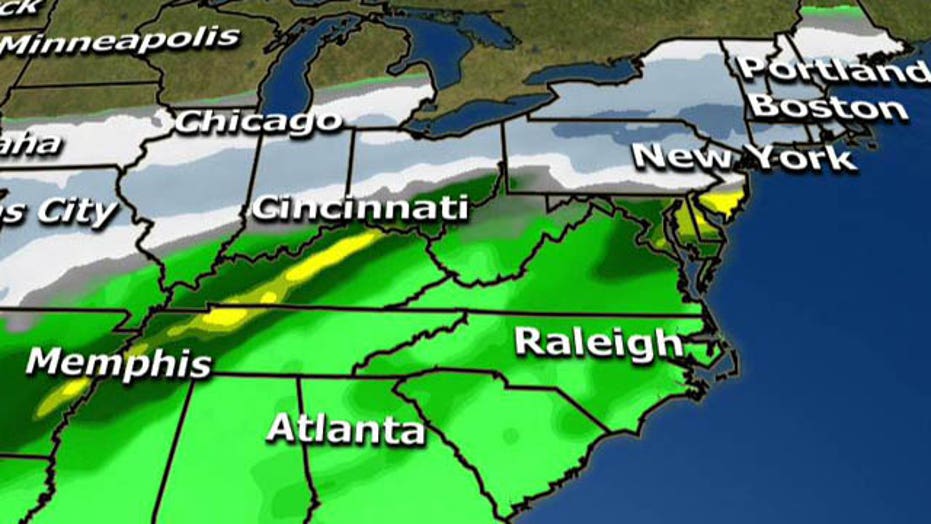 Air traffic is snarled and schools are closed as a winter storm moved into the mid-Atlantic and the Northeast Monday, a day after temperatures reached into the 50s.

The National Weather Service says the storm could bring up to 8 inches of snow to Philadelphia and New York, along with temperatures in the 30s.

The snowstorm is making travel difficult for football fans trying to leave the New York area after Sunday's Super Bowl.

As of Monday midday, more than 2,000 flights were canceled nationwide, according to the flight-tracking website FlightAware.com. The cities seeing the most flights canceled are New York City, Newark and Philadelphia.

Inbound flights to Newark and Philadelphia are being delayed three to four hours because of snow and ice.

In the New York City area, the snow is expected to taper off around 7 p.m., but temperatures will remain around freezing throughout the day, according to MyFoxNY.com.

In the Boston region, up to 4 inches of snow is expected before another storm rolls in Wednesday, which forecasters predict could bring up to a foot of snow, MyFoxBoston.com reports.

That storm, which will move across the central U.S. on Tuesday, is also expected to dump significant amounts of snow on cities like Omaha, Wichita, Kansas City, Indianapolis, Cleveland and Detroit, according to The Weather Channel.

A third storm is expected to hit the Northeast this weekend.

For Russ Louderback, of Fishers, Ind., and his 11-year-old son Mason, the Super Bowl was a triple whammy of bad luck in less than 24 hours: Their beloved Denver Broncos lost, they got stuck in an hours-long traffic jam leaving the stadium and their 3 p.m. flight home Monday was canceled.

"It was so congested we couldn't get out of New Jersey, even though we left early because our team lost," said Louderback, 57, a hotel executive. He hopes to be on a plane Monday evening.

Francois Emond of Alma, Quebec, also had his flight home cancelled. But the fan of the victorious Seattle Seahawks said it was a dream trip and great game, and he didn't at all mind spending another night in New York City.

Forecasters expected the snow to taper off by early afternoon. However, another storm is likely to hit the same region beginning Tuesday night, bringing a combination of rain, freezing rain and snow, said Gary Szatkowsi, a weather service meteorologist in Mount Holly, N.J.

"I like to say Punxsutawney Phil agrees with me," Szatkowski said. "Winter's not over, that's for sure."