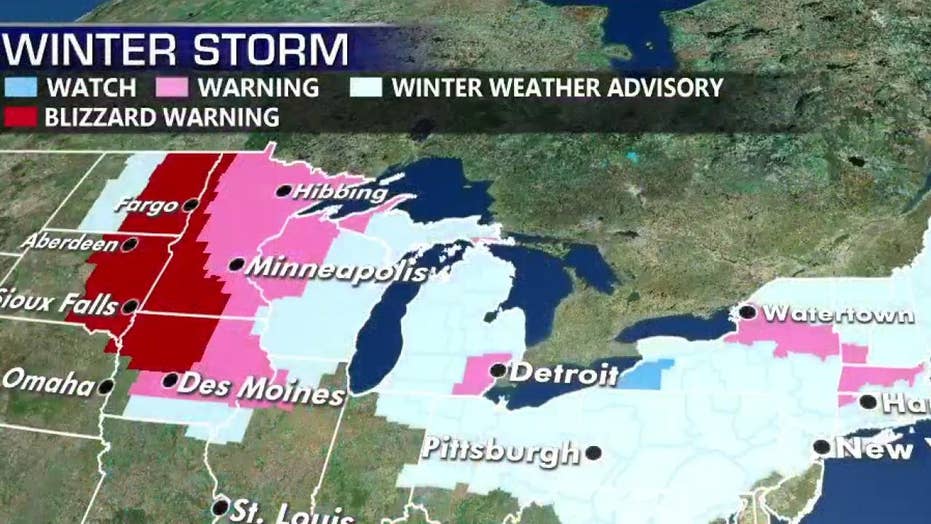 A “sprawling” winter snowstorm that slammed the West Coast earlier this week is producing blizzard conditions through much of the Plains as it travels East this weekend, having already canceled nearly 690 flights at one of the nation’s busiest airports, stranding drivers alongside major highways and even triggering an avalanche at a California ski resort, killing one.

The National Weather Service issued winter weather advisories for much of the Midwest and upper Mississippi Valley into the Great Lakes Saturday morning as a “sprawling winter storm” is expected to bring heavy snow and wind gusts of over 50 mph to the region, creating “life-threatening travel conditions” throughout the weekend.

Just to the south, portions of the Midwest into the Mid-Atlantic have already seen a mix of freezing rain and several inches of snow.

O’Hare International Airport in Chicago saw nearly 690 flights get canceled by Friday evening after the Federal Aviation Administration (FAA) halted all flights in and out. An additional 169 flights were canceled at Midway Airport before the ban was lifted at around 9:45 p.m.

Early Friday morning, a Delta Air Lines flight carrying 123 passengers and 6 crew members slid off an icy taxiway at Kansas City International Airport as it was getting de-iced before its flight to Detroit.

There were no reported injuries.

Not far away, in Lee’s Summit, Missouri, a fire truck overturned on an icy road after returning from a call. There were no injuries reported.

The worst of the blizzard conditions are forecasted to hit across the eastern Dakotas, Minnesota and northern Iowa, the National Weather Service said.

A 231-mile stretch of I-29 between Grand Forks, North Dakota and Sioux Falls, South Dakota was shut down Saturday morning as the State Highway Patrol warned drivers to stay off the roads.

“Do not travel on these roadways AND don’t try to get around the closures on our secondary roads. You will get stranded and put your life and others in danger,” a tweet from police read.

A similar closure was ordered for parts of I-84 in Idaho where slick roads and reduced visibility led to multiple crashes along the interstate.

Further out west, a man was killed in an avalanche at a Lake Tahoe ski resort Friday after the Sierra Avalanche Center had warned of dangerous conditions for all elevations following the storm.

Snow drifts pile up at Alpine Meadows ski resort in Alpine Meadows, Calif. on Friday, Jan. 17, 2020. An avalanche Friday at a Lake Tahoe ski resort killed one skier and seriously injured another a day after a storm dumped large amounts of snow throughout the picturesque area. (AP Photo/Scott Sonner)

Another skier was seriously injured with a lower-body injury and was airlifted to a Lake Tahoe hospital for emergency surgery.The definitive cause of the avalanche is still under investigation.

The storm is expected to move through the Great lakes on Saturday, eventually making its way into northern New York and New England on Sunday.