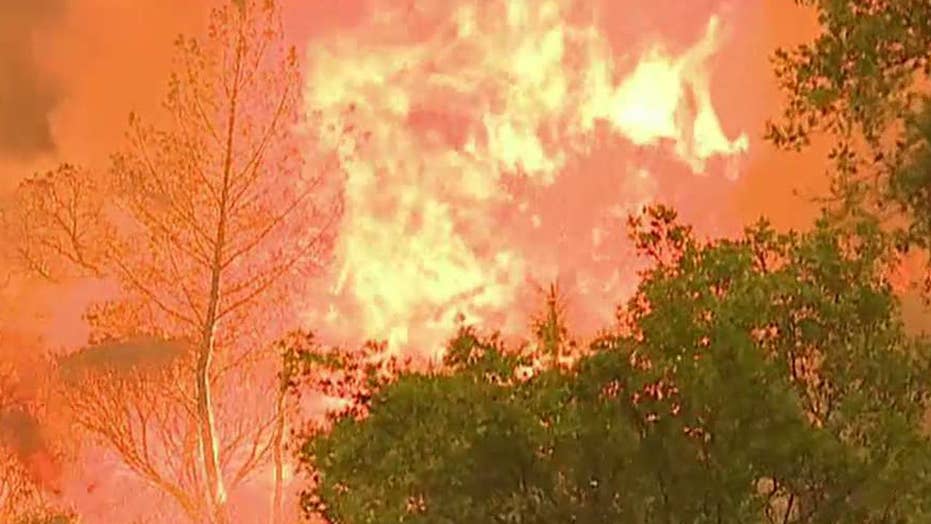 GUINDA, Calif. – A massive wildfire in rural Northern California has exploded in size and forced evacuations in hot, dry weather that is sweeping through several western states where blazes are threatening thousands of homes.

The fast-moving fire that started over the weekend northwest of Sacramento grew dramatically to about 94 square miles (243 square kilometers) by Monday night, largely burning out of control in rugged terrain with a few cattle and horse ranches and sending smoke and ash as far south as San Francisco.

State fire officials said 700 homes and other buildings were threatened but none had burned.

The fire that started Saturday about 100 miles (160 kilometers) northeast of San Francisco spread as strong winds pushed smoke south, dusting cars and homes with a thin layer of gray ash. About 300 people were told to flee their homes. No injuries were reported.

The flames were chewing through tinder-dry grass, oak and brush in the hills outside of the tiny town of Guinda, California Department of Forestry and Fire Protection spokesman Gabe Lauderbale said.

"This fire is absolutely, extremely fast-moving," he said.

Thick smoke put a damper on what would otherwise be a busy time at nearby Lake Berryessa.

"It's frustrating," Chad Frazier, the owner of Berryessa Watersports at the Markley Cove Resort, told KGO-TV. "We were hoping with Fourth of July being on a Wednesday this this whole week would give us a bump. But obviously with the fire, it's not happening."

The hot, windy conditions fueling the fire and others across the West were expected to persist through the end of July in Utah and parts of California, Idaho, Nevada, Oregon and Washington, U.S. fire officials said. The Southwest, which has been struggling with drought, should get enough rain in early July to reduce the risk of major blazes in Arizona, Colorado and New Mexico, the National Interagency Fire Center said Sunday.

In Colorado, more than 2,500 homes were under evacuation orders as firefighters battled more than a half dozen wildfires. Most of the evacuations were tied to an 89-square-mile (230-square-kilometer) wildfire in southern Colorado that led to the arrest of a Danish man on arson charges.

Jesper Joergensen, 52, initially said he had started a fire to burn trash but then said he had been grilling in a permanent fire pit the day before the blaze began, according to a court document.

Joergensen, who reported the wildfire, said it started about 20 feet (6 meters) away from the fire pit Wednesday and he tried to put it out, according to an arrest affidavit.

Joergensen has been living in the country illegally, the document says, and federal immigration officials have requested that they be allowed to take custody of him if he's released from jail.

It's not clear if he has a lawyer who could speak on his behalf.

People have fled about 570 homes near a 2-square-mile (6-square-kilometer) fire that started Friday west of Colorado Springs. About 360 children at a camp also had to be evacuated by the Chateau Fire.

In neighboring Wyoming, about 150 firefighters tried to contain a wildfire burning in the Medicine Bow National Forest near the Colorado border. It has burned about 33 square miles (85 square kilometers) since June 10. The fire is about 80 percent contained but flared up in the last week, prompting authorities to advise some residents to prepare to evacuate.

A wildfire burning in hot and dry conditions in Utah has forced the evacuation of about seven to 10 seasonal cabins near a popular fishing reservoir. The homes that are threatened about 80 miles (129 kilometers) southeast of Salt Lake City are not primary residences.

The fire has scorched about 10 square miles (25 square kilometers) near Strawberry Reservoir and officials believe it is human-caused but are investigating, said Jason Curry of the Utah Division of Forest, Fire and State Lands.

This story has been corrected to show that officials say the fire in Northern California is burning in two counties and that an agency website saying it spanned three counties was incorrect.