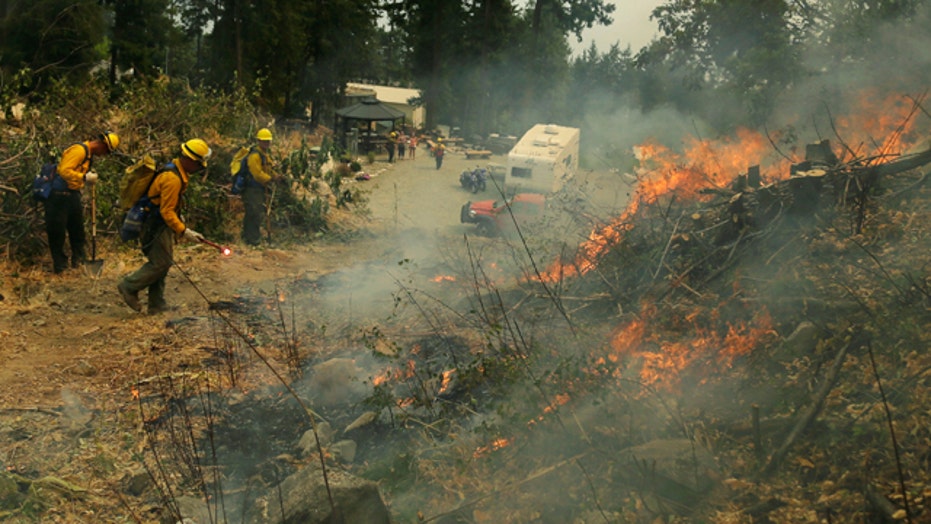 The guard units working in Washington Tuesday were part of a massive response to blazes burning unchecked throughout the West.

The situation is so urgent that the National Interagency Fire Center in Boise this week called in 200 active-duty military troops to help contain roughly 95 wildfires. It's the first time since 2006 that the agency has mobilized soldiers for fire-suppression.

Outside Chelan, the Guard units helped set controlled burns to use up fuel as helicopters dropped water. More than 1,000 people worked to protect homes from the lightning-sparked blazes that began last week, have burned more than 170 square miles and destroyed an estimated 75 buildings.

Western fire managers looked for help wherever they could find it.

"Nationally, the system is pretty tapped," said Rob Allen, the deputy incident commander for the fires around the Cascade Mountain resort town of Chelan. "Everything is being used right now, so competition for resources is fierce."

The active-duty troops are all coming from the 17th Field Artillery Brigade at Joint Base Lewis-McChord near Tacoma and will be sent to a fire north of Republic, a town in central Washington, about 30 miles south of the Canadian border.

Fire managers at the center are able to enlist military help when there are not enough civilian firefighting teams, thanks to a 1975 agreement between the Defense, Interior and Agriculture departments.

The help can be crucial in particularly active years like this one, when the center's firefighting teams and equipment are fighting hundreds of fires across many states. In the last two weeks alone, more than 1,500 square miles have burned in the Lower 48 states, center spokesman Ken Frederick said.

"It's like the fire season gas pedal has been pushed to the floor in a really short period of time, and that's stressed our resources," Frederick said. "And that's got us relying on help from resources we don't normally use."

The fires in the Pacific Northwest get top priority when it comes to allocating pinched resources.

A lightning-sparked fire in Oregon's Malheur National Forest has grown to 63 square miles and destroyed at least 26 houses. An additional 500 structures are threatened by the flames near the community of John Day, also in Oregon.

In the Northern Rockies, so many wildfires have ignited this month that officials are letting some that might be suppressed under normal circumstances burn because manpower and equipment are committed elsewhere.

The area experienced a normal fire season until last week, when a combination of drought, high temperatures and lightning-packed storms created new blazes across western Montana and Idaho.

As of Tuesday, at least 95 fires were burning in the two states, about 30 of them considered large, according to the Northern Rockies Coordination Center in Missoula.

That included a group of fires in northern Idaho that have scorched 90 square miles and destroyed 42 homes in the last several days, as well as a wildfire in the western part of the state that led about 120 residents to evacuate and others to prepare to flee near McCall.

California is doing well in terms of resources, despite a pair of massive blazes in the north. Officials prepared for a drought-fueled fire season by bringing in several hundred more firefighters than in previous years.

On Tuesday, smoke was thick in the air of downtown Chelan. Particles of ash fell from the sky. Some residents wore surgical masks as they walked through town.

The firefighters sleep in the woods, get up every morning and work a full day, said Allen, the deputy incident commander.

"It's hot. It's dirty," said Allen, who usually works for the Bureau of Land Management in Alaska. He said authorities were looking for all the resources they could muster.

"The military has been activated. We have National Guard here to help us out," Allen said, adding that Canada loaned resources, too, and authorities were also talking to New Zealand and Australia.

Everyone is working to save Chelan, at the south end of Lake Chelan in the Cascade Range.

"Chelan is still at risk, but we have very significant amounts of structure protection," said fire spokesman Brian Lawatch. "The name of the game today would be going on offense."

The Chelan fires are about 30 percent contained, Lawatch said. That includes deliberate burnouts in some areas, plus trying to direct the fire into previously burned areas or areas with little fuel.