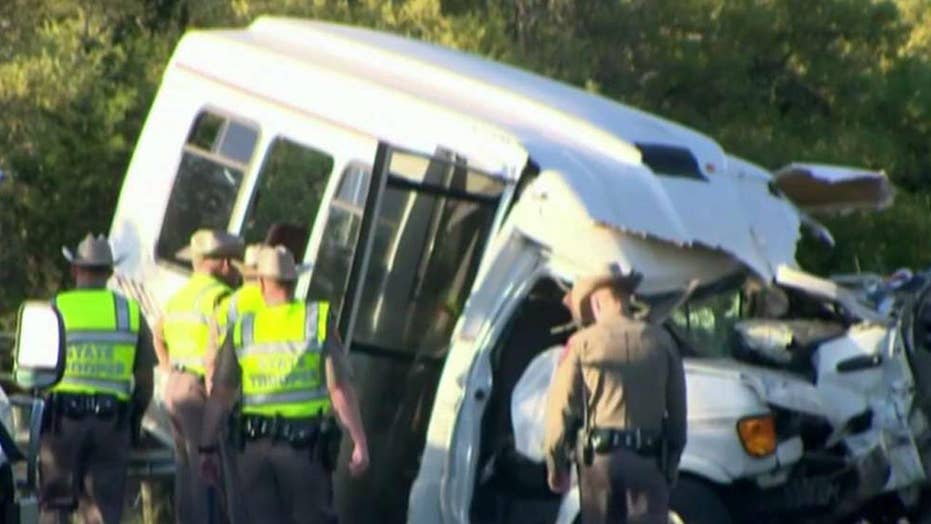 Adam Housley has more on the crash

The wife of the Texas bus driver killed in a crash last month was found dead in her home Tuesday, officials said.

The body of Dianne Barrett was discovered in her New Braunfels home at around 9:45 a.m., police spokesman David Ferguson told the San Antonio Express-News. Her death came two weeks after her husband, Murray Barrett, was killed in a crash with a pickup truck that also killed 12 other people.

MAINE PLANE ENDS UP NOSE-DOWN AFTER EMERGENCY LANDING ON HIGHWAY

The cause of her death was unclear, but investigators said there were no signs of foul play. "She was by herself at the time of her death," Ferguson added.

The First Baptist Church of New Braunfels, where Dianne Barrett served as a ministry assistant, announced in a statement to the newspaper it was “saddened” to learn of her passing.

"We continue to pray for our Lord's mercy and comfort for our church family members who continue to grieve,” the church said.

Dianne Barrett’s husband was driving a church bus when a pickup truck, that was allegedly driving erratically and crossing the highway, struck the bus. She was not on the bus.

Court records showed that Jack D. Young, the driver of the pickup, had taken two pills of Clonazepam and generic forms of Ambien and Lexapro. Young told police that the Clonazepam made him sleepy. A state trooper said in a sworn statement that he had probable cause Young was intoxicated at the time of the crash.

A witness told the Associated Press that Young had told him he had been texting before the accident.

No charges have been filed.