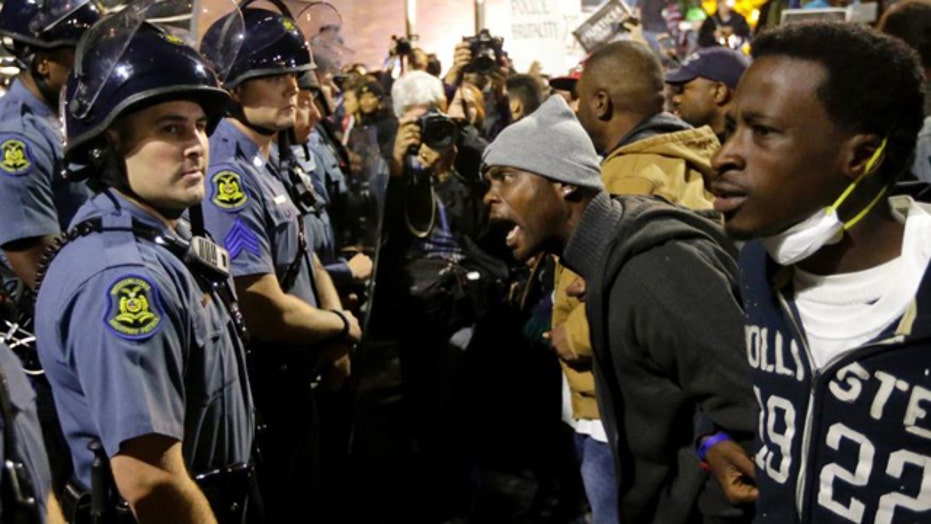 Who is to blame for the war against law enforcement?

Protest organizer defends chant of 'pigs in a blanket, fry 'em like bacon'

Police departments face a recruiting shortage amid a growing anti-cop mood that some fear has taken the pride out of peacekeeping and put targets on the backs of the men and women in blue.

Open calls for the killing of police have been followed by assassinations, including last week's murder in Texas of a Harris County sheriff's deputy. Instead of dialing back the incendiary rhetoric, groups including "Black Lives Matter" have instead doubled down at demonstrations with chants of "Pigs in a blanket, fry em like bacon." Public safety officials fear the net effect has been to demonize police, and diminish the job.

"It's a lot harder to sell now," Jeff Roorda, business manager of the St. Louis Police Officers Association and former state representative, told FoxNews.com. "This is a very real phenomenon."

"We're sitting ducks. We're in these uniforms, brightly colored cars and there's nothing we can do."

Roorda's colleagues witnessed the fierce, anti-police rioting that followed the police shooting last year of Michael Brown in nearby Ferguson, Missouri. Even though a grand jury and a federal Justice Department inquiry did not fault Ferguson Police Officer Darren Wilson, debunked claims that the cop killed Brown as he held his hands up and begged for his life have animated the Black Lives Matter movement as it spread around the nation.

Roorda, who spoke in defense of police in the aftermath of the Ferguson shooting, said protesters took to Twitter to promote a #KillRoorda hashtag.

"You no longer just have to worry about your life while in uniform," he said. "Now you have to be worried about the well-being of your family," he said.

Roorda said the new academy class continues to be delayed and the police force loses about double the amount of officers per year than in the past.

Knowing police face public scorn or career-ending legal battles even if they acted properly has convinced many prospective cops to abandon their dreams of patrolling America's streets.

"I saw all this anti-cop propaganda and I was like, 'Who needs this?'” said Antonio, a New Yorker who asked that only his first name be used. The 32-year-old had applied and been accepted into the NYPD academy, but withdrew his candidacy amid the cop-bashing climate sweeping the country.

Even top police brass understand why the shield has lost its shine.

"Right now, policing is not the most attractive occupation that they could probably get into," Philadelphia Police Commissioner Charles Ramsey told CBS.

Recruitment nationally is "way down," said Jonathan Thompson, executive director of the National Sheriff’s Association. He said some sheriffs around the country say the number of applications has fallen by as much as 50 percent.

While blatant calls for killing cops are unusual, the job has always been dangerous. The National Law Enforcement Officers Memorial Fund, which monitors the number of police officers killed in the line of duty, tabulated 48 police officers around the nation were killed by gunfire in 2014. So far this year, 26 law enforcement officers have been shot to death on duty, putting the nation on track for a 19 percent decrease. But these numbers do not identify police officers intentionally targeted for the mere fact that they wear a badge.

Police in Texas believe that may have been the sole motivation for the murder Friday night of Harris County Sheriff's Officer Darren Goforth at a gas station in a Houston suburb. The suspect in that case, Shannon Jaruay Miles, allegedly came up behind Goforth as he pumped gas and shot the officer 15 times.

In December 2014, New York City Police Officers Wenjian Liu and his partner Rafael Ramos were killed in an ambush while sitting inside their patrol car on a Brooklyn streetcorner.

"No warning, no provocation," Police Commissioner William Bratton said at the time. "They were quite simply assassinated, targeted for their uniform."

The gunman reportedly announced online that he was planning to shoot two "pigs" to avenge the death of Eric Garner, a Staten Island, N.Y., man who died after being put in a chokehold by police who were arresting him for selling loose cigarettes.

"I'm putting wings on pigs today. They take 1 of ours, let's take 2 of theirs," Ismaaiyl Brinsley wrote on an Instagram account. Brinsley killed himself on a subway platform as police closed in on him.

There is currently a massive manhunt in Fox Lake, Ill., after a police officer was shot and killed while pursuing a group of men. Lt. Charles Joseph Gliniewicz, known affectionately as "GI Joe" was giving chase to three men on foot.

In addition to the Brown and Garner cases, the anti-police sentiment has been fueled by the April death in police custody of Freddie Gray in Baltimore and the fatal shooting, also in April, of Walter Scott in South Carolina. Six Baltimore police officers face charges in the death of Gray, who died of injuries suffered while being transported in a police van. North Charleston Police Officer Michael Slager has been charged with murder in Scott's shooting.

Galvanized by the deaths, Black Lives Matter has sought to bring attention to the issue of police brutality with protests around the nation.

"What's more uncomfortable, shouting, stopping freeways and interrupting speeches -- or being murdered by police and having your body left in the street for more than four hours, or turning up dead in a jail cell after a traffic stop?" the group posted on Facebook.

Some law enforcement officials believe President Obama has fanned the flames by not denouncing the movement more unequivocally, although he did personally call the widow of Goforth and has condemned violence against police.

"President Obama has breathed life into this ugly movement," Milwaukee County Sheriff David Clarke told "Fox & Friends." "And it is time now for good, law-abiding Americans to rise up. We now have to counter this slime, this filth coming out of these cop haters."

Sgt. Delroy Burton, chairman of the DC Police Union in Washington, compared the current treatment of police to veterans returning from the Vietnam War.

"We have to fight the bad guys, and the policymakers go unnoticed," he said.

Burton, who was born in Jamaica and is a former U.S. Marine, said his police force is about 131 officers understaffed and has seen nearly 600 officers resign in the past 19 months -- a number he said is unheard of.

"We're sitting ducks," he said. "We're in these uniforms, brightly colored cars and there's nothing we can do. And the vast majority supports this loud vocal minority."