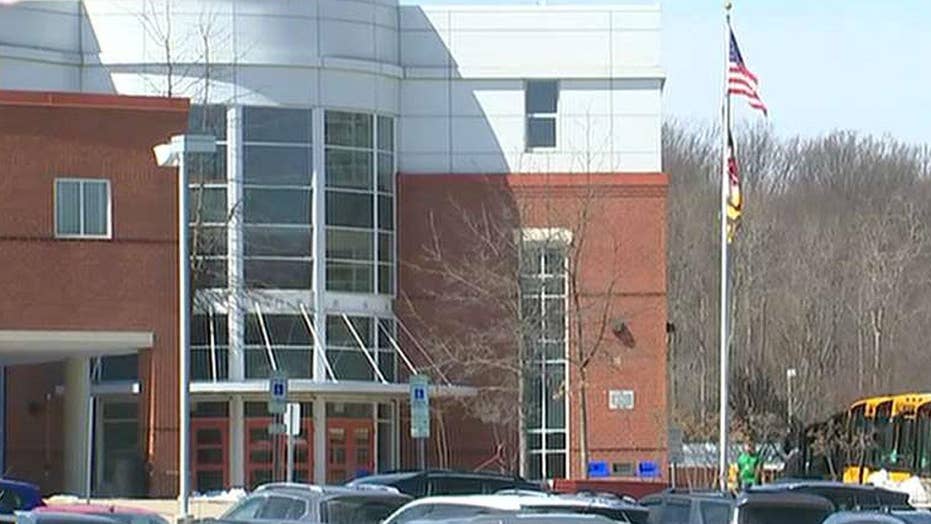 Critics - including the White House - blamed the alleged rape of a 14-year-old girl in a high school restroom by two much older immigrants students, at least one here illegally, on failed federal policies.

The horrific attack Thursday, in a Rockville, Md., high school was allegedly carried out by two immigrants, ages 17 and 18, who were enrolled in the ninth grade.

"This is a tragic event," White House spokesman Sean Spicer said Tuesday. "It is horrendous and horrible and disgusting what the girl in Rockville went through.

"From an immigration standpoint, there are so many questions," Spicer said. "[One of the suspects] was 18. How does that person get put into 9th grade?"

“Some have severe mental health problems resulting from broken families or parental neglect, exposure to violence in their home country, and a traumatic experience coming here illegally.”

Critics say the attack grimly underscores the challenge of enrolling upper-teen illegal immigrants with poor language skills in public schools. One suspect, identified by police as Henry E. Sanchez-Milian, had been caught crossing the Mexican border just months ago.

It was not immediately clear if the other suspect, Jose O. Montano, 17, from El Salvador, was in the county illegally but county executive Ike Leggett told local press both had outstanding ICE orders.

“The surge of Central American kids has become a significant problem in many of the school districts where they are allowed to re-settle,” said Jessica Vaughan, director of policy studies for the Washington, D.C.-based Center for Immigration Studies. “It’s not uncommon for older kids to be placed in the lower high school grades with much younger kids, because they usually have had only a few years of schooling in their home country.”

Sanchez-Milian, a native of Guatemala, and Jose O. Montano, 17, from El Salvador, were charged with first-degree rape and two counts of first-degree sexual offense. Court records say they dragged the girl into a men’s bathroom, where they allegedly violently raped, sodomized and forced her to perform oral sex in a stall.

At a press conference Tuesday, Smith took aim at concerns raised by critics over immigration policies.

"While some have made this into an issue on immigration, we serve every student that walks in through every door," he said. "We want to serve them because we know it would not be good for any child to go without an education."

"We're not going to paint all students with a broad brush because of a really terrible incident," Smith said.

As a result of the attack, Smith said schools throughout the district are on "heightened alert" in regards to awareness of movements in buildings, but as far as explaining how the attack could have happened, information will come out "as the investigation progresses."

Vaughan said other students and their parents have no way of knowing which classmates are illegal immigrants – in some cases adults – or what dangers they may pose.

“Some have severe mental health problems resulting from broken families or parental neglect, exposure to violence in their home country, and a traumatic experience coming here illegally,” Vaughan said.

“It’s a terrible situation. It’s a horrible situation,” the superintendent told Fox5DC. “We looked at all the information from Thursday and we handed it over to the police immediately. At this point, it is their investigation.”

“We do have 555,001 cases through the end of Februrary pending before our courts, and our priorities are cases where the individual is still in detention,” said Kathryn Mattingly, of the Executive Office for Immigration Review at the Department of Justice. “Detained cases are our highest priority.”

Since Sanchez-Milian was released, he did not fall into that priority category. Still, the Border Patrol agent could have detained Sanchez-Milian and then sent him back across the border – but did not.

“If the Border Patrol intercepts somebody within 200 miles of the border, they have the ability to return the individual,” an official from Immigration and Customs Enforcement told Fox News. “But these individuals often claim fear of returning to their home country or desire some sort of judicial review for special reasons like asylum, or a special visa, so they ask for a right to see a border judge.”

Sanchez was ordered to appear before an immigration judge, but the hearing had not yet been scheduled.

ICE has since lodged an immigration detainer against Sanchez-Milian, so ICE can take him when he is released from local custody.

ICE did not release information on Montano. Both Montano and Sanchez will be tried as adults and could receive a life sentence. The judge who oversaw their bond hearing refused to release them on bail, because the students are “dangerous and flight risks.”

The Trump administration has made slashing the backlog of cases in immigration court a top priority. In some parts of the country, there is a three-year waiting list.

“We recognize that in order to reduce our immigration caseload we need to increase our hiring of immigration judges,” Mattingly said.

Officials in Montgomery County have been pushing to make the area a sanctuary for immigrants, and, according to Vaughan, is already uncooperative with ICE when it comes to illegal immigrants like Sanchez-Milian.

“Montgomery County is not the worst, but it’s pretty bad,” Vaughan said. “When Northern Virginia cracked down around 2005 from 2011, many illegals moved to Montgomery County, where they knew they would be treated more leniently.”

Montgomery County does not track crimes committed by illegal immigrants.

“This is not a statistic we track,” Maj. Michael England of the Rockville Police Department told Fox News.

“The State of Maryland is calling on Montgomery County to immediately and fully cooperate with all federal authorities during the investigation of this [alleged] heinous crime,” Hogan tweeted on Tuesday. “The public has a right to know how something this tragic and unacceptable was allowed to transpire in a public school.”

While most illegal immigrant kids enrolled at public schools do not pose a threat to their classmates, gang activity in school districts around the country has been linked to illegal immigration. On Long Island earlier this month, more than a dozen members of the El Salvadoran gang MS-13 were indicted in connection with seven murders in three years, including the deaths of several high school students last year.

Local communities’ refusal to cooperate with ICE, Vaughan said, means “many gang members and other thugs and miscreants are allowed to remain in the county in defiance of immigration laws and causing problems like this.”

Kids from Central America who cross the border illegally, without being vetted, may not have a criminal history here, but can in their country, said Claude Arnold, a former U.S. Immigration and Customs Enforcement special agent in charge of Homeland Security Investigations.

“These two could have gang ties in El Salvador and Guatemala or have an otherwise violent criminal history,” Arnold said. “Just like the thousands of other unaccompanied minors that have been released in the U.S. for the past several years, we know nothing about them.”