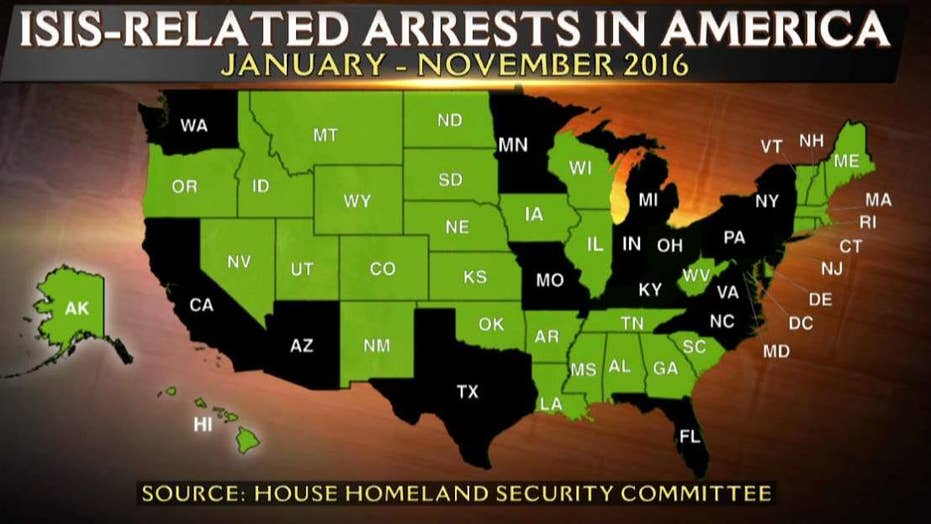 What does Trump need to do in first year to fight terror?

Repeat this to yourself now – ‘Get off the X.’  Go ahead say it a few times and imprint it upon your brain. It sounds simple and probably a little confusing at this point, but it may save your life.

Far too often innocent civilians across America are hearing the terrifying sound of gunfire and/or explosions in places that they should not be hearing it. Who would have thought that a trip to the grocery store or a shopping mall would require forethought and planning for such events? Most people still don’t think this way, but our collective level of alertness needs to be increasing.

Mass shooter and lone wolf terror incidents are on a steady climb and there does not seem to be any end in sight for such terror. Extremist groups across the globe have begun to understand that frequent chaos can have more significant impact than the grandiose attacks of the past, which take more coordination. More coordination equals more communication, which means it becomes more likely that the U.S. and foreign intelligence services will be able to identify and disrupt the plans. However, as we have all witnessed, lone wolf terror attacks are far more difficult, almost impossible, to predict and we subsequently are frequently in reaction, vice prevention, mode. Particularly in cases where susceptible individuals in the United States, or elsewhere, are radicalized via the internet and have no previous ties to extremist groups.

With this type of activity on the rise we frequently are asked, ‘What do I do if I find myself stuck in the middle of one of these events?’ The question has been addressed by self-declared experts on multiple network television shows and print publications, but the hard truth with such a new phenomenon is that most are not trained to handle these individual and extremely unique terror incidents, particularly when it comes to interdiction. Given the nature of how these unique events start and often culminate rather quickly before first responders can even arrive on the scene, people – you – are typically on their own.

How depressing, people are not specifically trained to handle this and won’t get to us in time. Great, thanks OpsLens.

Don’t worry, it is not that bad, we will give you some tools that we are taught and can help you and your loved ones improve your odds of surviving and you will be shocked how simple our suggestion is. In fact, you have already repeated it to yourself…

Elements of training for most intelligence and military operators touch on evading and escaping similar horrific events, but it varies greatly depending on where one serves.

What is common however throughout the services and intelligence agencies is the concept of getting off the ‘X’. Even the most highly trained operators in the world know when it is time to retreat and fight another day, and that is what this concept touches on. While it can happen while performing an offensive action, whether patrolling or performing a direct action mission via ambush or a surprise resistance force, the need to get off the X most typically occurs when you least expect it. For your purposes, enter the increased number of lone-wolf terror attacks.

People at a restaurant in Paris didn’t expect a man to detonate himself while they sipped on a nice Bordeaux, nor did individuals expect to be gunned down at a holiday party in San Bernardino, but alas this is the world we live in now. Our list could of course go on and on with Orlando, New Jersey, Boston, the truck incident in Nice or the terror in Brussels, but you get the point. Danger is now always closer than it used to be and as such we need be prepared.

Sorry to reiterate a sour point, but most of you will not have the luxury like myself and my colleagues that have received a myriad of scenario based training where muscle memory is formed. So the next best thing is training your brain and visualizing events and how you would react, this will (for some of you) kick in when it counts.

People will call you crazy for taking mental note of exits and possible threats when entering a room or building writ large, but you need to. Just don’t tell them if you feel weird about it, but always be visually experiencing in your mind what could happen, because that will help you when the worst happens, particularly with getting off the X.

So what is the X?

Simply stated the X is the location of increased danger and violence. It is the area where the greatest threat to your existence occurs. This can change as an event progresses, but using the Paris restaurant as an example, the X is the restaurant where the violence is occurring. If there is gunfire in the mall, the X is the section within the mall where the shooter is actively firing at civilians.

The reasoning for getting off the X is obvious; your chance of survival dramatically increases if you are not in the blast zone or range of fire from a shooter. But getting off the X is also not always as simple as it sounds. As mentioned before, most individuals are not trained to endure such horrifying events where the floor is ripped out from beneath you, we are. For most, such events will cause many to freeze in a heightened state of fear and/or shock, when they should be moving off the X. Again, nothing can replace training and repetition, but having at least visualized these events in your head helps.

Even as you read this, some will be saying, but what exactly is the X, define the space, which we cannot because it varies on location, the threat, etc. The bottom line is people have to move quickly and smartly away from the threat, even if in increments.  Bottom line: The goal is always to place more distance between you and the individual or individuals that are creating the violence.

Keep in mind a few things as you consider your movement off the X and to your first safe space. Most shooters are not trained sharpshooters, meaning their manipulation of the weapon, or weapons, that they are using is not perfected and as such their accuracy is going to suffer. But this alone isn’t a comforting thought for running away from the danger, so consider other elements.

What pieces of cover are between you and freedom?

Cover is anything that can protect you from the shooter. This is not just line of sight though, standing behind a traditional wooden or drywall is not cover because as you might imagine those structures are quite permeable and will not protect you from gunfire.  A concrete wall, barrier or pillar will do, or if in parking garage the engine block or wheel well of vehicles. Translation, if you can avoid it, don’t just sprint down a straight hallway when fleeing the shooter. Bound from one piece of cover to another and always know that the X may be following you. Remember keep getting distance until you are certain that you are safe.

Pay attention to the shooter(s) cadence of fire.

I know, I know most do not know what weapons fire what amount of rounds. We get that, but use some basic logic here. In the movies good and bad guys alike just keep shooting, but if there is any silver lining in these horrific real life events, know that the bad guy will have to reload. Listen for lulls in fire or if you have visual of the assaulter, then try to observe for those brief seconds when he or she is reloading, that could be your chance to run.

In conclusion, these events are never pretty. They are never the same. But the simplest solution to take with you and your loved ones is to ‘get off the X’, run, get away from the threat. Staying and hoping for the best is never the smart solution. Remember, even in these terrifying and unpredictable scenarios, the best trained warriors will employ the same strategy and try live to fight another day.

Drew Berquist is the founder and a Senior Contributor for OpsLens. Drew served as a counterterrorism officer for the United States Intelligence Community, where he performed more than thirty deployments to Iraq and Afghanistan to conduct intelligence operations. Drew has commented on national security matters on Lou Dobbs, Dennis Miller and a number of other shows throughout the country. Follow Drew and his staff of contributors on Twitter at @OpsLens