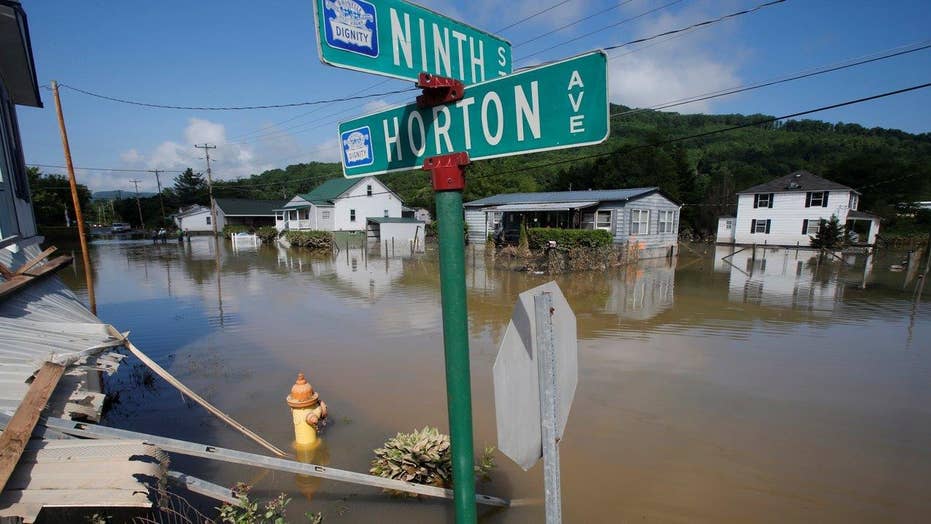 CHARLESTON, W.Va. – During the little rest James Phillips gets since his daughter vanished, his mind rumbles with flashes of horror.

In his nightmares, Phillips imagines himself as his 14-year-old daughter, Mykala. There are trees. There's a wall that she's trying to see under. There's water.

His sleep never lasts long and he wakes up to a reality far worse: his daughter hasn't been found since she was torn from her brother's grip and an extension cord keeping them together after a raging flood ripped their home off its foundation June 23.

He heard her screaming as the water washed her away.

Hope that the family will ever see her again seems to be slipping away, too.

"I have come to terms with the fact that we might not find her at all," her mother, Becky Carter Phillips, told The Associated Press on Wednesday. "It's all still shock."

Mykala Phillips is the only person still unaccounted for from the floods that killed 22 others in West Virginia. That includes 14 in Greenbrier County, where an estimated 9 inches of rain fell over a 36-hour period.

Search teams have scoured a seven-mile area along Howard's Creek. The effort has involved hundreds of National Guard members, police and fire units, volunteers and even employees of the local Greenbrier resort. County Sheriff Jan Cahill said Wednesday that they have used divers, canoes, boats, helicopters, drones and cadaver dogs.

A 44-year-old woman was found elsewhere in the county more than 30 miles from her home earlier this month, more than a week after the flood. It was a bleak reminder of the scope of the flood's devastation and the challenge that authorities face to bring closure to families.

On June 23, the floodwaters poured into the Phillips' small home. It rose at least 6 feet, forcing the father and his three children to climb out a window while their mom was at work.

Phillips tied the children together with extension cords that he held onto, and the one brother gripped his siblings, too. But the water's power snapped the cord and slipped the brother's grip, sending Mykala into the current. She went in one direction, her brothers ages 15 and 7 went another.

"We could hear her hollering," James Phillips said. "But we couldn't see her anymore. When my daughter wasn't there, that's the scariest part of my life."

Phillips said he was forced underwater by the current and felt himself bump into the hood of his car. They eventually grabbed a gutter and held onto it until the floodwaters began to recede.

At midafternoon, Becky Carter Phillips started heading home on foot from her job at the resort. The 15-minute walk to her street took two hours. The floodwaters prevented her from going any further.

"You couldn't see the road. It wasn't nothing but water," she said.

James Phillips and the boys were in the waters nine hours before being rescued.

While the boys only had scrapes, Phillips sustained fractures in his right foot, hurt a knee, reinjured his back and knocked out multiple teeth. He counted the ones that are left — 11 — and most of those are cracked. He didn't seek medical help until the next day.

Phillips' injuries prevented him from helping in the subsequent search for his daughter.

The Phillips family lost everything in the flood. They found another home they intend to buy but are struggling to come up the money to pay for it. James Phillips has been out of work as a certified mechanic due to his chronic back problems. He describes his working wife as the "rock" of the family who takes care of most needs in the household.

On the day of the floods, Mykala posted a selfie photo on her Facebook page. That photo has since been reposted on multiple tribute pages.

She loved music, talking on the phone, drawing artwork and was willing to help anyone in a time of need.

"She would try to do anything, even if she didn't know how. She would try to do it," said Amy Morrison, whose son, Joshua, was dating her. "She was here on Father's Day. I was on a walker. She said, 'well, if you tell me how, I can make the biscuits for the meal.'"

James Phillips said his daughter was going to be a teacher at a Bible school this year. He said he wants the public to "pray and keep hoping that they find her."

For now, Phillips consumes energy drinks to stay awake "and put on a face to stay strong" for his sons.

"You never want them out of your sight, I can tell you that," he said.