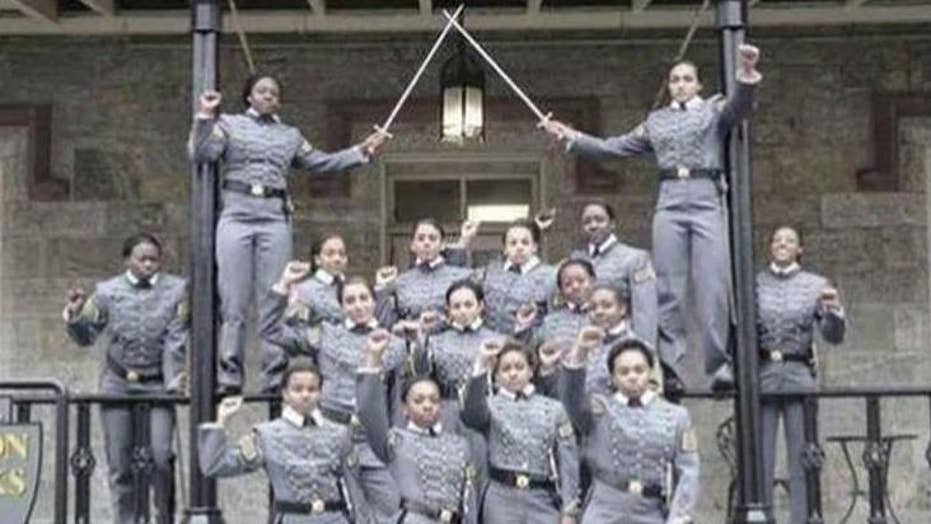 NEW YORK – The U.S. Military Academy has launched an inquiry into a photo showing 16 black, female cadets in uniform with their fists raised, an image that has spurred questions about whether the gesture violates military restrictions on political activity.

West Point is looking into whether the photo broke any rules, Spokesman Lt. Col. Christopher Kasker said Saturday. It's unclear how long the inquiry will take and too soon to say what consequences it could have for the cadets, who are poised to graduate May 21.

By campus tradition, groups of cadets often take pictures in traditional dress uniforms to echo historical portraits of their cadets. Indeed, a different picture of the same women, without the raised fists, was tweeted out by the chairwoman of the academy's Board of Visitors, 1980 graduate Brenda Sue Fulton.

But the fists-up image, which circulated online, led some observers to question whether the women were expressing support for the Black Lives Matter movement, which grew out of protests over police killings of unarmed black men.

The Army Times, which first wrote about the photo Thursday, said several readers had written in to say they believed the cadets were breaching a Defense Department policy that says "members on active duty should not engage in partisan political activity," with exceptions for voting and certain other things.

But Mary Tobin, a West Point graduate and mentor who knows the students, said they were simply celebrating their forthcoming graduation as a shared accomplishment, like a sports team raising helmets after a win.

"It was a sign of unity," Tobin, a 2003 graduate, said by phone. "They weren't trying to imply any allegiance to any movement."

The raised fist has served as a symbol of power and resistance for various political movements and causes. The gesture has caused controversy before, including when black American sprinters Tommie Smith and John Carlos lifted gloved fists in black power salutes during a medal ceremony at the 1968 Mexico City Olympics.

Yet the cadets, immersed in the insulated and demanding environment of West Point, didn't anticipate how their gesture would be interpreted and the attention it would draw, said Tobin, who has spoken with them about it.

"Their frame of reference is: 'Right now, we're getting ready to graduate in three weeks, I'm standing here with my sisters .... We outlasted a lot of people, black or white, male or female,' " she said.

Black women cadets are rarities at West Point, where about 70 percent of students are white and about 80 percent are men, although the percentage of women has been growing in recent starting classes.