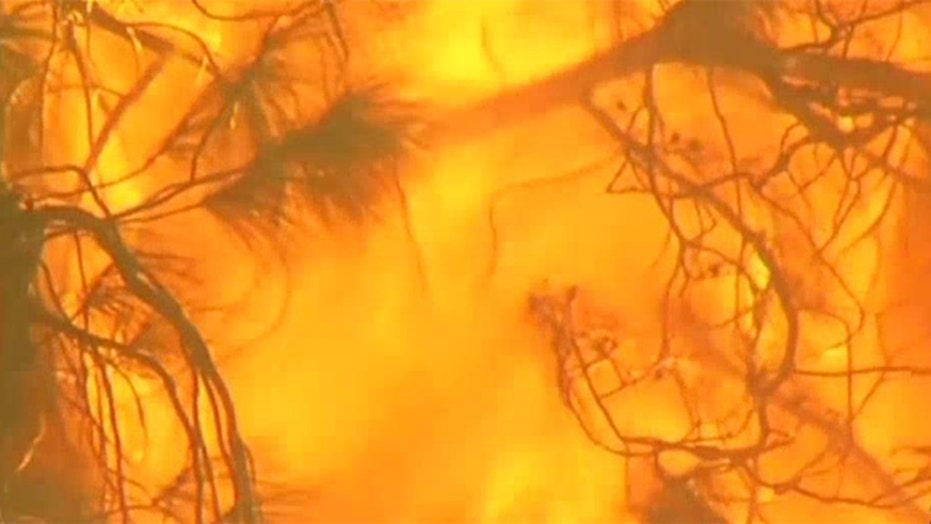 The largest of 20 wildfires burning across California jumped a highway that had been serving as a containment line Monday afternoon, even as cooler weather aided crews struggling to contain the blaze about 100 miles north of San Francisco.

Erratic winds blew hot embers north of Highway 20 and ignited several fires north of the city of Clearlake, defeating the best efforts of crews to create a buffer between the so-called Rocky Fire and thousands of threatened homes.

"There were too many (spot fires) for us to pick up," Battalion Chief Carl Schwettmann of the California Department of Forestry and Fire Protection told the San Francisco Chronicle after the stand on Highway 20. "With these drought-stricken fuels, it's just moving at an extremely high rate of speed."

At least two dozen homes were destroyed over the past few days, and more than 13,000 people were urged to flee.

The fire -- the largest blaze in drought-stricken California -- roughly tripled in size over the weekend to almost 97 square miles, generating its own winds that fanned the flames and reduced thousands of acres of manzanita shrubs and other brush to barren land in hours.

"There's a lot of old growth-type vegetation and four years of drought to dry it all out," said Lynne Tolmachoff, a spokeswoman for the California Department of Forestry and Fire Protection. "It was ready to go."

The fire was burning in the Lower Lake area, about 100 miles north of San Francisco and 10 miles from Clear Lake, the largest freshwater lake entirely within California and a popular spot for boaters and campers. Fire officials said no homes around the lake were threatened.

Evacuated residents were amazed at how quickly the flames spread.

"I'm overwhelmed," Donna McDonald, of Clear Lake, said at a high school that had been turned into a shelter. "I was very happy at one point when I saw no smoke at all. Then all of a sudden it just flared up real big again."

Layna Rivas, of Clearlake Oaks, evacuated her home over the weekend and wanted to get back to feed her chickens.

"We are hoping we only have to deal with winds from the weather instead of the fire creating its own winds," he said.

Numerous other wildfires in California, Washington state and Oregon took off as the effects of drought and summer heat turned the West Coast combustible. California blazes killed a firefighter last week and injured four others.

Crews in the Lower Lake area conducted controlled burns, setting fire to shrubs to rob the blaze of fuel and protect some of 5,500 homes threatened. The fire was burning in a rural area of grasslands and steep hills.

The fire destroyed at least 24 homes and 26 outbuildings. More than 13,000 people have been forced from their homes or have been warned to leave.

More fire crews were brought in, bringing the number of firefighters to nearly 3,000. Two more National Guard air tankers were being brought in from Colorado to drop retardant, Tolmachoff said.

Crews battled 20 other wildfires in California -- some sparked by lightning -- though none as big as the Lower Lake blaze. Mandatory evacuations were also in place farther north in a remote rural area of the Shasta-Trinity National Forest.

The Lower Lake fire is well short of historic proportions. One of the largest wildfires in California history was a 2013 blaze that took out 400 square miles of Sierra Nevada wilderness.