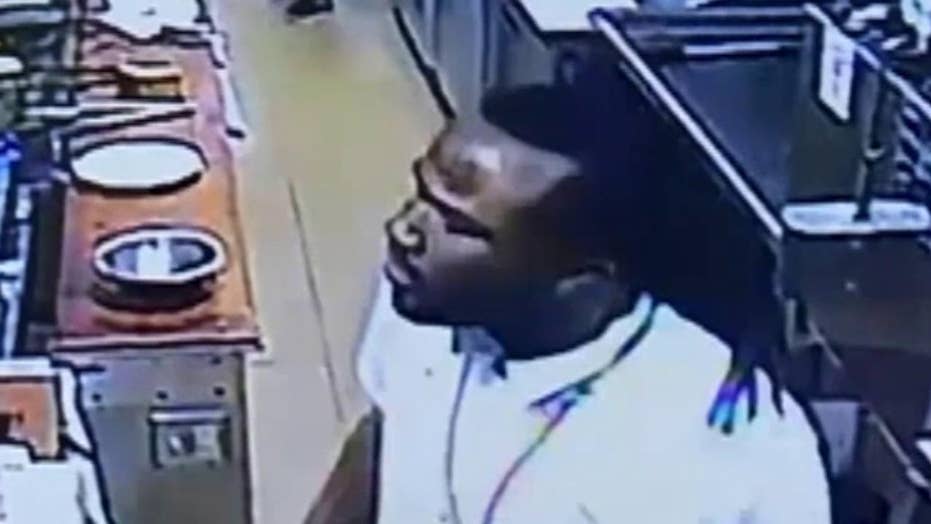 Police search for man after assault on George Webb employee

A waitress with a concealed carry permit defended her co-worker after an irate customer went behind the counter and punched her, newly released video reveals.

The attack at George Webb restaurant in Milwaukee on June 28 could have been much worse, according to Alderman Bob Donovan, who made the footage public.

“I thank God the other waitress had a concealed carry weapon, has a permit... I shudder to think, had she not been there and had she not had this weapon, what this guy might have done," Donovan told Fox 6.

The suspect, who is a regular at the restaurant and reportedly had been cursing at his server throughout the night for taking too long with his order, came behind the counter and punched her in the face.

Within seconds, the woman’s colleague pulled out a handgun from her waistband and pointed at him until he backed off.

A customer at a George Webb in Milwaukee, seen above, punched an employee and only backed off when another server pulled out a handgun. (Google Earth)

MAN ACCUSED OF TOSSING DRINK AT PRO-TRUMP TEEN IS ARRESTED

Although the suspect has not been arrested, Fox 6 reports that Milwaukee police know who they are looking for and that the man is allegedly a drug dealer.

According to local media, the victim is back at work and she said the restaurant’s owner allows employees to carry a concealed weapon as long as they have a permit.

"It is sickening to see this unsuspecting worker assaulted so brutally by this individual," Donovan said. "For a man to do that to some innocent woman, it's just beyond me."

The Milwaukee alderman urged anyone with information on the suspect to call police at 414-935-7360.