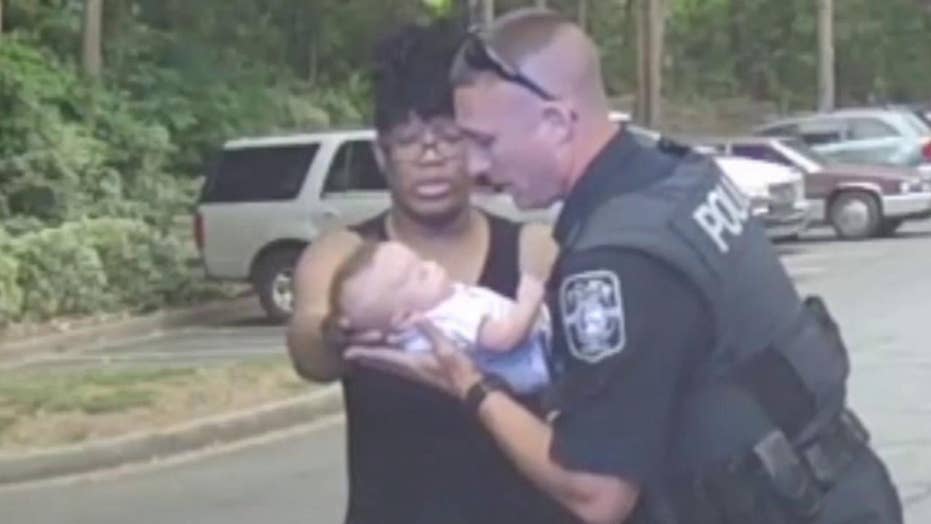 Georgia officer jumped into action to save a baby that was not breathing.

A Georgia police officer is being hailed a hero after a dramatic dashcam video shows him performing CPR to help a choking infant breathe again.

“Baby got the eyes open but not crying,” Officer Nick St. Onge is heard saying into his radio after he responded to a call to assist a baby who was conscious but not breathing and turning blue on May 15. “The child is approximately 2-months-old.”

Litte Zeona was feeding on a bottle when her airway was blocked, Fox 5 Atlanta reported late Thursday.

St. Onge, who has been a cop for five years and was a Marine for eight years, said he relied on his police and military training to deal with the situation.

"It was three minutes of sheer terror," St. Onge said.

The video--posted on the Marietta Police Department Facebook page Thursday-- shows the officer administering back blows and chest thrusts to try and get the baby to breathe. Zeona’s worried grandmother Kianna Dorsey is looking on.

A short time later he hears a faint cry.

Fox 5 reported that Zona has been doing fine since being released from the hospital.

“It was a joyous experience, I’ll tell you that,” St. Onge told the station. “I'm happy to be one of those officers in the right place at the right time.”