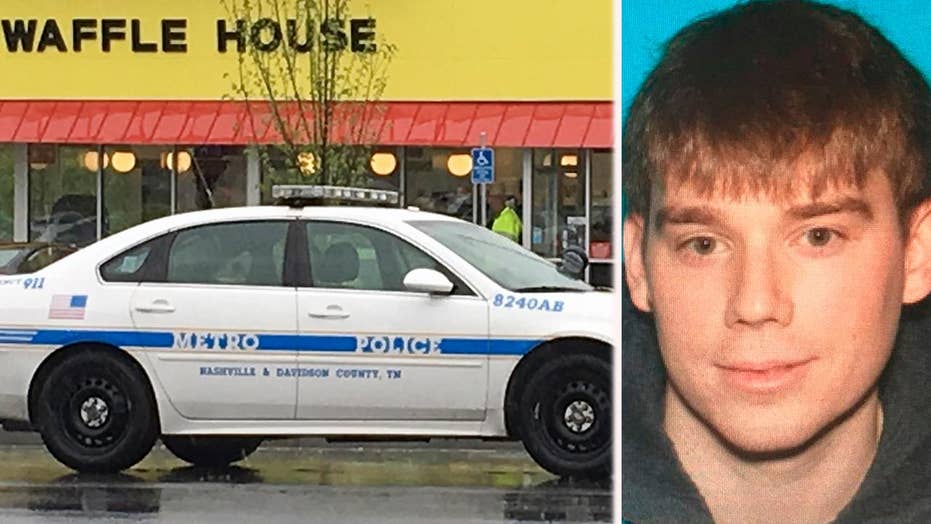 The man suspected of killing four people in a half-naked shooting rampage inside a Waffle House outside of Nashville may be carrying a pistol as he evades police — and has what authorities described as a history of mental illness.

The suspect, 29-year-old Travis Reinking, was arrested in July 2017 for being in a restricted area near the White House, investigators revealed in a Sunday news conference, saying he "wanted to set up a meeting" with President Trump. More than a year before that, Reinking claimed the singer Taylor Swift was stalking him, police said.

WAFFLE HOUSE PATRON, 29, HAILED A HERO AFTER WRESTLING GUN AWAY FROM SHOOTER

A possible motive for the shooting at a Waffle House in Antioch early Sunday morning was unclear, according to police. Investigators said in a news conference Sunday afternoon that two guns were missing, but tweeted later that just one gun was unaccounted for.

"Reinking was charged with unlawful entry after crossing an exterior security barrier near the White House Complex," the Secret Service told Fox News of his arrest last summer. "Information regarding the arrest was provided to our law enforcement partners, including the FBI, at the time of arrest to ensure all appropriate authorities were aware of the circumstances surrounding Reinking’s arrest."

In May 2016, law enforcement officials in Tazewell County, Illinois, said they encountered the suspect, who was "delusional." Reinking claimed Swift had been stalking him, and that "everyone including his own family and the police" had been involved, a police report obtained by Fox News stated.

Reinking who relatives claimed had been having delusions since August 2014, said Swift had hacked his Netflix account and told him to meet her at a Dairy Queen, according to the report.

In addition, Reinking reportedly had exposed himself in a public pool after swimming in his underwear in June 2017. Someone had called the cops on Reinking, who was apparently "wearing a pink womans house coat and had a AR-15 rifle."

A Tazewell County Sheriff's Office report stated that in August 2017, Reinking wanted to report that 20 to 30 people were "tapping into his computer and phone," and said that he's been hearing people outside of his house "barking like dogs."

Reinking told the officer he felt people were "baiting him into breaking the law" and watching him, and explained "that this all started after he started writing Taylor Swift."

Reinking's firearms authorization was revoked at the request of the FBI after the arrest near the White House, Metro Nashville Police Department spokesman Don Aaron said Sunday. He added that four weapons were seized, including the AR-15 that Reinking allegedly used in Sunday's shooting.

Aaron said the four guns were returned to the suspect's father, who acknowledged giving them back to his son.

The AR-15 was among the guns recovered by law enforcement on Sunday.

Craneworks, a company which Reinking worked for for a day, said in a statement that the suspect "was designated to work on a probationary basis," and "did not work in any sensitive position nor did he work in a position of authority."

The company, which said Reinking didn't return for his second day of work and was terminated, noted that it "had no reason to know or suspect that [Reinking] was mentally unstable or capable of committing these senseless crimes."

Reinking was wearing a green jacket with no shirt and no pants during the shooting, Aaron said. After the suspect bolted from the restaurant, he apparently returned home and put on pants before running off again, police added.

Police continue to search for gunman after multiple fatalities at a Nashville Waffle House.

Officials identified the four people who were killed in the shooting as Taurean Sanderlin, 29; Joe Perez, 20; Akilah Dasilva, 23; and DeEbony Groves, 21.

A man who was dining at the restaurant said he spotted an opportunity to confront the shooter and pull away his gun.

"I figured if I was going to die, [the gunman] was going to have to work for it," James Shaw Jr. said of the incident at the news conference. He had entered the restaurant just two minutes ahead of the gunman.

James Shaw Jr. said he managed to confront the shooter after his gun jammed. (Fox 17)

"He shot through that door; I'm pretty sure he grazed my arm. At that time I made up my mind ... that he was going to have to work to kill me. When the gun jammed or whatever happened, I hit him with the swivel door," Shaw said.

Shaw said he managed to get one hand on the gun and grab it, then threw it over a countertop and took the shooter with him outside before the suspect ran away — a situation Shaw said "worked out in my favor."

Even though Shaw said he acted against the gunman "completely out of a selfish act," officials called him a hero, and said the 29-year-old saved "many lives in his heroic actions."

The Tennessee Bureau of Investigation added Reinking to its "Top 10 Most Wanted" list on Sunday and is offering a reward of up to $2,500 for information leading to his arrest. The bureau said he's 6'4" and weighs 180 pounds.

Fox News' Kevin Kirby and The Associated Press contributed to this report.