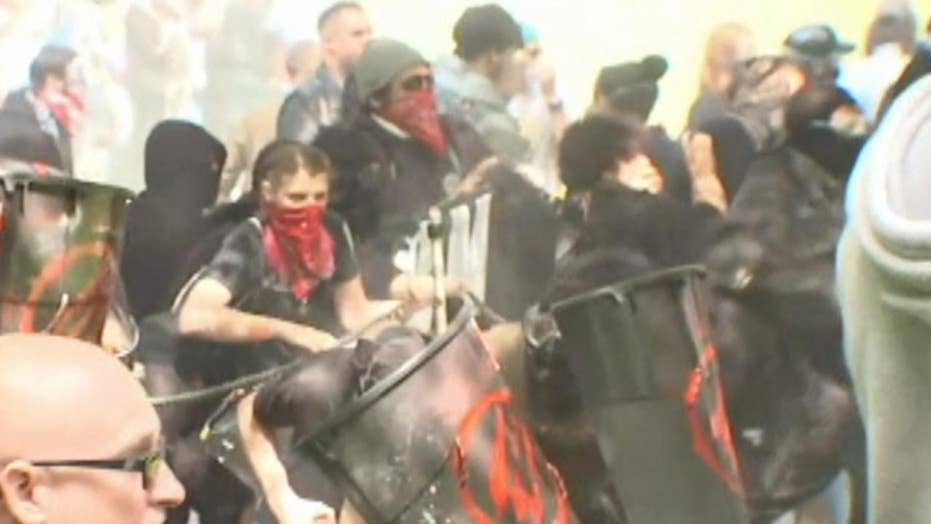 Antifa activists stormed a Portland, Ore., rally by the right-wing group Patriot Prayer Sunday, sparking a violent confrontation that saw punches thrown and bottles hurled, and ended only when police in riot gear moved in.

The pro-President Trump group, led by Joey Gibson, organized a rally — "Tiny's Freedom March," to honor a member. But the event drew a counter-protest from Patriot Prayer's nemesis, Antifa, whose members arrived wearing their trademark black.

The two groups clashed a year ago in the same area, spurring violence and clashes with police that resulted in 14 arrests. 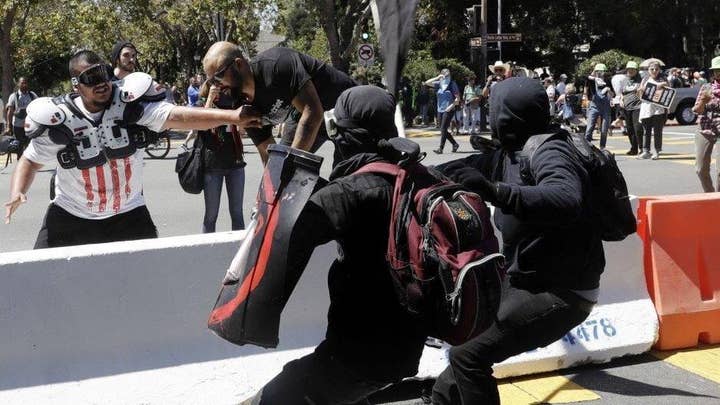 This time, the Rose City Antifa scheduled a counter-protest for 4 p.m. "to show Patriot Prayer, just as we showed them last year, that their violence and hatred has no place in Portland."

"Officers have observed participants at today’s events at Terry Schrunk Plaza and Chapman and Lownsdale Square participate in assaultive behavior," Portland police tweeted within minutes of the Antifa rally's start.

"Officers have observed participants at today’s events at Terry Schrunk Plaza and Chapman and Lownsdale Square participate in assaultive behavior."

Witnesses said members of Patriot Prayer attempted to drown out the counter-protest by reciting the Pledge of Allegiance.

The dueling rallies in Terry Schrunk Plaza, a swath of federal land in downtown Portland, escalated with shoving, punches thrown and at least one fire set on the Antifa side. Portland police sought to break up fights and separate the groups. Officers with the Federal Protective Service and a Multnomah County sheriff's deputy used pepper spray twice, as demonstrators threw fireworks, bottles, rocks and ball bearings at each other, The Oregonian reported.

One unidentified woman who was marking with the Patriot Prayer group told KPTV she was attacked.

“They were kicking me and punching me,” the woman said. “They were punching my mom when she was trying to get me off the ground.”

"The intent of our presence today was to provide a safe environment for all participants, non-participants, and community members while ensuring the peaceful exercise of the First Amendment," said Portland Police Chief Danielle Outlaw. "The Police Bureau attempted to communicate directly with group organizers through the use of social media, a loud-hailer, and person-to-person communication in an effort to encourage an environment in which Portland community members could safely practice their right to free speech and assembly."

Peggy Zebroski, who was protesting against the Patriot Prayer rally, told KPTV that police were more restrained than they’ve been in years past.

“I think the police were more restrained then they have been,” Zebroski said. “However I saw them arrest several people in the counter-protesters group, but none of the folks that were throwing pepper spray at us.”

Several weapons, including knives and fireworks, were confiscated.

Jonathan Feilt, 36, and Andrew Arbow, 32, were charged with second-degree disorderly conduct, according to KOIN-TV. Gregory Isaacson, 43, was given a federal citation for failure to comply with lawful order, the station reported. Another person was arrested but refused to give police their name.

Police said several people were treated for minor injuries at the scene but didn't require hospitalization.