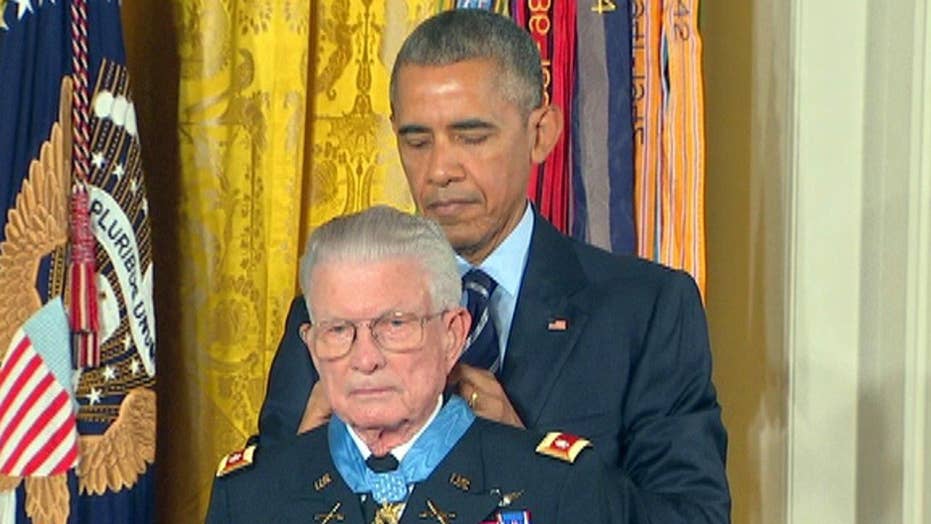 President Obama awarded the Medal of Honor to retired Lt. Col. Charles Kettles of Ypsilanti, Michigan during a ceremony Monday at the White House.

Kettles led helicopter flights carrying reinforcements to U.S. soldiers and evacuated the wounded after they were ambushed in combat operations near Duc Pho in May 1967. Describing how one soldier hung on to the damaged helicopter's skid, President Obama said, "[you] couldn't make this up. It's like a bad Rambo movie."

Kettles repeatedly returned to a landing zone under heavy fire. He is credited with helping to save 40 soldiers and four members of his unit. During the final evacuation effort, he was advised that eight soldiers had been unable to reach the helicopters, so he returned without benefit of artillery or tactical aircraft support.

The Army said his helicopter was hit by a mortar round that damaged the main rotor blade and shattered both front windshields. Small arms and machine gun fire also raked the helicopter.

"In spite of the severe damage to his helicopter, Kettles once more skillfully guided his heavily damaged aircraft to safety," the Army said in describing his actions. "Without his courageous actions and superior flying skills, the last group of soldiers and his crew would never have made it off the battlefield."

Obama says Kettles serves as a great inspiration for Americans at a time when the country has been suffering through a rough couple of weeks. He said Kettles shows how Americans look out for each other even when times are tough and even when the odds are against them.

The Veterans History Project launched a formal campaign to upgrade Kettles' Distinguished Service Cross for his actions that day to the Medal of Honor. After the Pentagon agreed his actions merited an upgrade, Congress passed legislation waiving a time limitation for the award, and paving the way for Obama's action.

"I didn't do it by myself. There were some 74 pilots and crew members involved in this whole mission that day, so it's not just me," Kettles says in a video on the Army's website. "The medal is not mine. It's theirs."