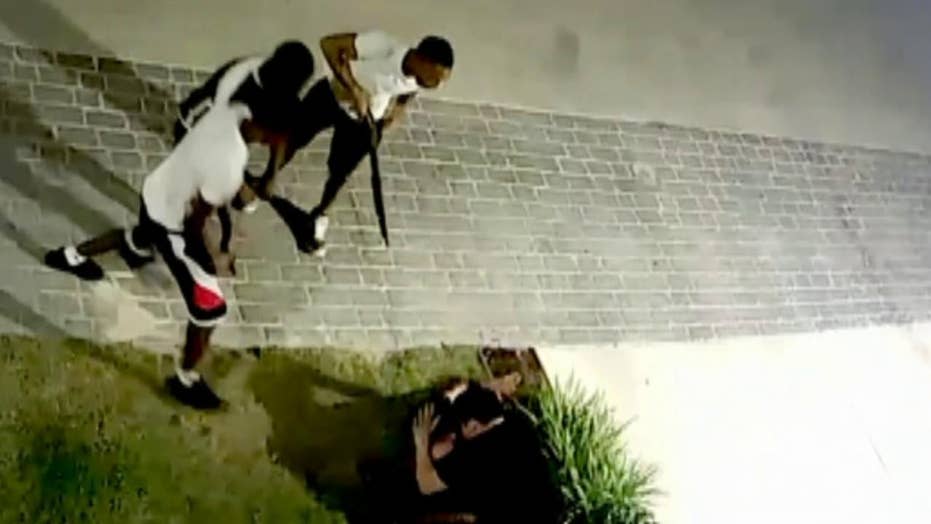 Dallas couple robbed at gunpoint outside their home

Six juveniles are now in custody in Texas following an alleged crime spree that one man said included moments of “sheer terror” as he and his wife were confronted with a shotgun while being robbed outside of their home in Dallas.

Garrett and Caroline Scharton were captured on surveillance footage walking their dog early Sunday morning when the group pulled up in a black Chevrolet Malibu that had been carjacked at gunpoint in Oak Cliff, according to reports.

“Give me your wallet!” one of the teens is heard telling the couple while a shotgun is pointed at them.

Garrett and Caroline Scharton were walking their dog early Sunday morning before getting robbed at gunpoint. The dog appeared to be unharmed in the incident. (KDFW)

Garrett Scharton then tells them to “take whatever you want” as his wife is screaming. The teens only made off with an iPhone, but Scharton told KDFW that he was kicked in the back of the head and suffered a busted lip.

“When I listened to what I was saying and how I was saying it, I never heard me be that afraid before,” he added.

Before the robbery, police told The Dallas Morning News the group surrounded a man walking home in Oak Cliff and punched him while demanding he hand over money. They also allegedly robbed and beat a Domino’s Pizza delivery driver after targeting the couple, authorities added.

Mesquite Police eventually caught up to the teens – whose identities have not been made public – following a police chase and took them into custody, according to KDFW. The teens behind held by police have not yet been charged.

The couple’s stolen phone and guns were reported to have been found inside the vehicle.

The Schartons ended up getting their phone back – but they say they now want to move out of their home or make their community a gated one.

“It’s not what you think will happen when you have your first home and you’ve been married for less than a year,” Caroline Scharton told KDFW.