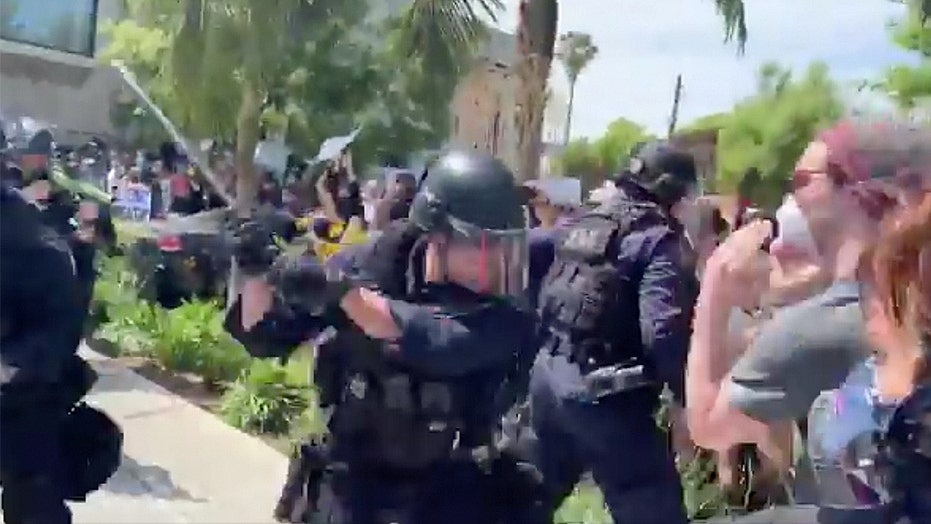 Disturbing videos appear to show Los Angeles cops striking George Floyd protesters with batons during an apparently peaceful demonstration, according to a report.

Several people recorded footage of the Saturday afternoon incident in the L.A. neighborhood of Fairfax, including Matt McGorry, an actor on the ABC television series "How to Get Away With Murder," ABC 7 LA reported Thursday.

McGorry said those struck with police batons were "simply standing there with their hands up," the station reported.

His video shows officers in riot gear approaching a crowd of protesters, then there is an inaudible exchange, the station reported. At least two officers begin swinging their batons, striking multiple unarmed demonstrators, according to the station.

The station reported that it was unclear if anyone was seriously injured or arrested.

The station reported that in response to its request for comment, the LAPD issued a statement that did not refer to that specific incident.

"Protests, marches and demonstrations over the last several days have been often dynamic and at times dangerous situations for both officers and demonstrators," the statement said, according to the station. "A number of these gatherings have unfortunately devolved into chaos with rocks, bottles, and other projectiles being launched at police officers, who have sustained injuries that range from cuts and bruises to a fractured skull.

The statement also said police misconduct complaints could be filed with the Office of Inspector General, according to the station.