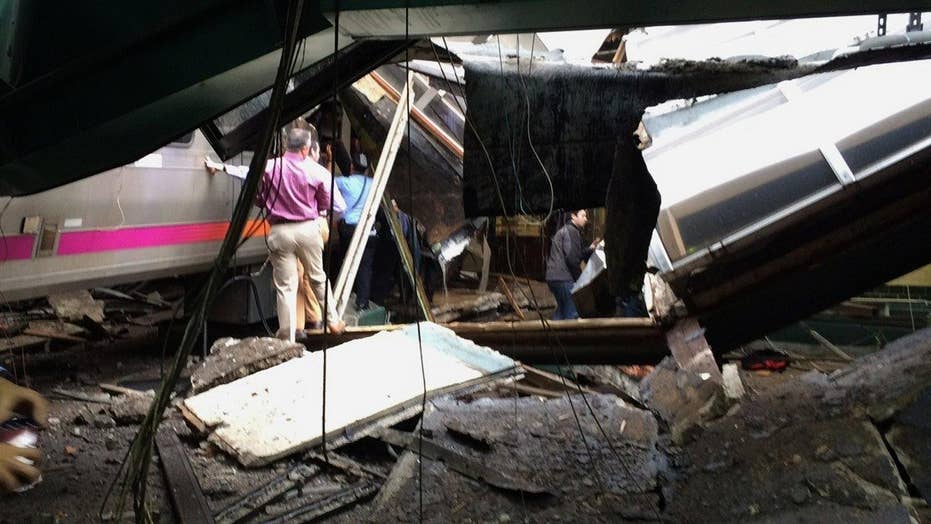 A train packed with commuters failed to stop as it crashed into the station; Rick Leventhal with the details for 'Special Report'

MORRIS PLAINS, N.J. – The engineer at the controls of a speeding commuter train that crashed into a station on Thursday, killing one person, has been in the railroad business for nearly three decades, and neighbors said he loves the work and they're heartbroken for him and his family.

Engineer Thomas Gallagher was cooperating after the rush hour crash at Hoboken Terminal, which killed a woman waiting on a platform and injured more than 100 other people, authorities said.

Gallagher, 48, was seen slumped over the controls after his train rammed through a barrier and came to a rest in the waiting area.

He was hospitalized briefly. He's expected to speak with federal investigators, the National Transportation Safety Board said.

Gallagher, a married father of teenage daughters, has worked for New Jersey Transit for 29 years, an agency spokeswoman said. A union roster shows he started as an engineer about 18 years ago.

A police car guarded Gallagher's home in Morris Plains on Thursday night. Hours earlier, police escorted a woman into the home so she could collect a few things.

Next door neighbor Penny Jones said she heard about the crash while out of the house and figured she'd ask Gallagher about it when she got back. Reporters told her he'd been involved.

"It was very shocking," Jones said. "I'm just heartbroken for them, they're just wonderful people."

Penny Jones' husband, Tom Jones, went over to Gallagher's home, where he said the engineer's daughters, mother and mother-in-law appeared upset and dumbfounded.

Gallagher attended Fairleigh Dickinson University from 1986 to 1990, according to his LinkedIn page. He listed his profession as "loco engineer," using railroad shorthand for locomotive.

Tom Jones said: "It was very evident that he loved his work -- loves his work."