One week after the mass shooting at Robb Elementary School in Uvalde, Texas people hold the first funeral for one of the victims. An 18-year-old shot and killed 19 children and 2 teachers and, some Texans are calling for a harder look at the state

UVALDE, Texas – One week after the mass shooting at Robb Elementary School in Uvalde, Texas, some Texans are calling for a harder look at the state's gun laws.

The shooting, which killed 19 children and two teachers, led some in the area to question how the shooter was able to purchase his gun legally, and if the age to purchase needed to be changed.

"I think 18 is too young," said Texas resident Sylvia Barrera. "It's just too young."

State Democrats in Texas are asking Gov. Greg Abbott for an emergency legislative session to pass laws that address last week's tragedy, such as universal background checks and raising the legal age to buy a gun from 18 to 21.

"I support the right to bear arms," said Texas resident Silvia Abrego. "But to protect this sort of tragedy from reoccurring or being normalized the way it has become in America, I think raising the age is definitely something I would support."

"An 18-year-old with mental health issues should not be able to go and purchase a weapon of war over the counter," said Hope Sanchez, a visitor to the Town Square memorial. "This is one of the most lax laws that definitely need to be changed."

Others, including Abbott, said laws should focus more on mental health rather than gun control.

"We will be looking for the best laws that we can get passed to make our communities and schools safer," Abbott said in a news conference last Friday. "If there's anybody here who thinks we can't do more to address mental health, they're wrong." 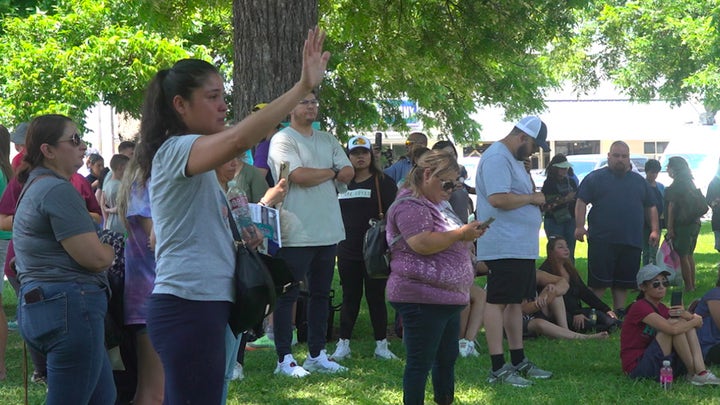 President Biden also says he felt personal responsibility to address the gun violence. After returning from Uvalde and speaking with reporters outside the White House on Monday, Biden suggested a ban on high-caliber weapons, but stopped short of using his executive powers to invoke a ban.

"Any executive action I can take, I'll continue to do that, but I can't outlaw a weapon," Biden said. "I can't change the background checks. I can't do that."

Meanwhile, many Texans are hoping for more than just words.