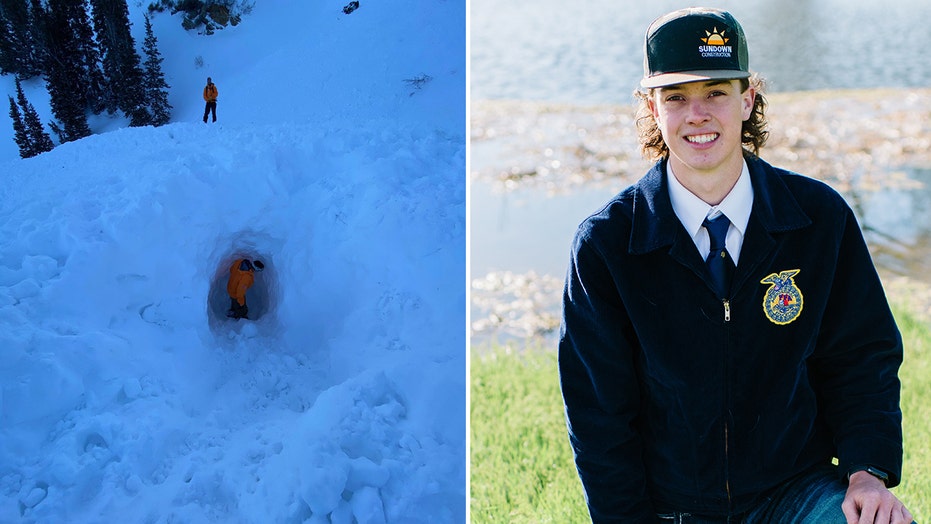 A teen in Utah died Saturday after being buried under an avalanche for over an hour while snowmobiling with his father, who confessed "my strength availed nothing" in the race to save his son.

Chase Adams, 18, and his father, Ben, were snowmobiling in Farmington Canyon, located about 20 miles north of Salt Lake City, when they were caught in an avalanche around 1:30 p.m., the Davis County Sheriff’s Office said.

CALIFORNIA HIKER, 17, SURVIVES BEING STRANDED FOR 30 HOURS IN SNOWY UTAH MOUNTAINS: 'I SHOULDN'T EVEN BE ALIVE'

While Adams and his snowmobile were immediately buried under the debris, his father managed to escape. Ben Adams said he prayed while calling 911 and Chase’s mother.

Rescuers dug out Chase Adams from the avalanche, but he later died at a hospital, the sheriff's office said. (Davis County Sheriff’s Office)

“We spent the day at a location that is dear to me and my boys,” he said Sunday in a statement released through the sheriff's office. “We had a wonderful day doing what we love to do. When the snow slid, I was shocked, but I had a feeling everything was going to be okay.”

Adams was wearing the necessary safety equipment: an avalanche beacon and inflatable backpack. He deployed the airbag in his backpack, but it did not float as intended, according to the sheriff’s office.

The avalanche, which was unintentionally triggered, buried Adams under at least six feet of snow, the Utah Avalanche Center said.

The debris piled up so high because the steep slope runs into the flat lake below without a transition, the Utah Avalanche Center said. (Davis County Sheriff’s Office)

Rescuers raced to the scene after receiving 911 calls. Within 70 minutes of the calls, rescuers located Chase, dug him out from the snow and airlifted him to a hospital, where he later died, the sheriff said.

Ben Adams thanked rescuers, medical staff and other bystanders on the slope for their efforts.

“I am an extremely strong man and in the moment of physical need to save my son my strength availed nothing,” he said. “I was useless and shifted my strength to God. I relied on Him, knowing my nothingness and trusting His great power to give me strength to know that, someday, we will see each other again, by virtue of Jesus Christ.”

While what triggered the avalanche is still under investigation, officials told the Standard-Examiner that the recent fluctuation between snow and warm weather could have caused the slide.