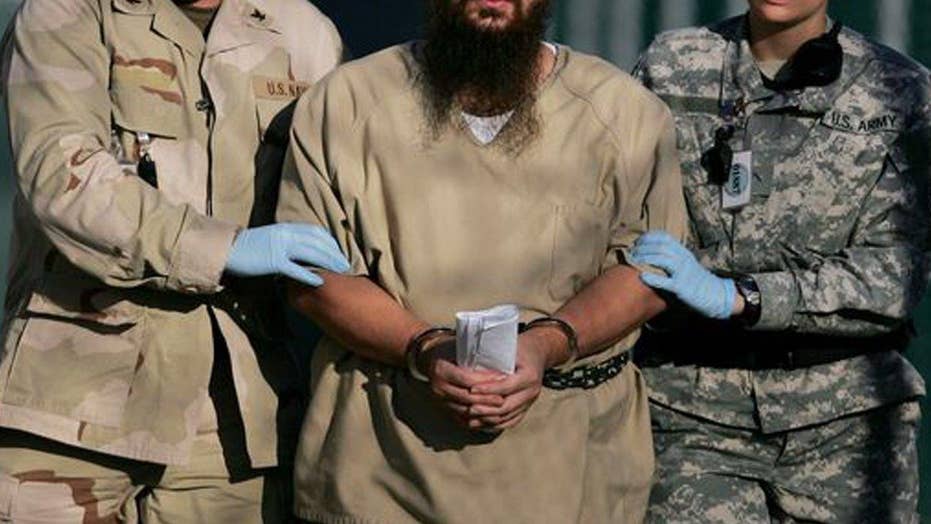 The man at the helm of the USS Cole when it was attacked by an Al Qaeda cell in 2000 said last month's release of a Guantanamo Bay detainee linked to the bombers denies justice to the 17 people killed aboard the ship.

Kirk Lippold, who was commanding officer of the U.S. Navy guided missile destroyer when suicide bombers aboard a small fishing boat blew a hole in the side of the ship, told FoxNews.com Mashur Abdallah Ahmed al Sabri's release was a mistake.

Sabri is believed to have been part of the Al Qaeda cell behind the Cole attack. (Department of Defense)

"I would have liked to have seen him receive a military commission where he was tried, convicted and sentenced and then his suitability for release determined under the laws of armed conflict," Lippold said.

"From the perspective of the American people and my crew, he’s never been held accountable," Lippold added.

In addition to those killed, 37 service members were wounded in the Oct. 12, 2000 attack, which came as the Cole refueled in the Yemeni port of Aden, nearly a year before Al Qaeda would register its signature attack, on 9/11.

Al Sabri, a 38-year-old Yemeni citizen who was born in Saudi Arabia, was at one point believed to have been a member of the terror cell behind the attack, although a subsequent assessment at Gitmo, like many done on detainees who have since been released, downplayed his role.

The Obama administration has acclerated the release of Guantanamo detainees to fulfill a campaign pledge to critics who say the suspected combatants are being held indefinitely without due process.

There was never enough evidence to bring under a military commission in al Sabri's case. But a September 2008 report by the Department of Defense assessed al Sabri as "high risk" and "likely to pose a threat to the U.S., its interests and allies."

Commander Kirk Lippold, USS Cole (DDG 67) from videotaped message to friends and family members of the crew aboard USS Cole following a 12 Oct. terrorist attack on the ship while refueling in Aden, Yemen. (RELEASED)

At that time, the reason for continued detention was listed as follows: "Detainee was a member of an Yememi Al Qaeda cell which was directly involved with the USS COLE attack. Detainee attended advanced training in Afghanistan after recruitment by a known Al Qaeda facilitator."

A 2014 report, however, said al Sabri "may have" trained at a camp, was merely an Al Qaeda "associate" and "probably did not play a significant role in terrorist operations."

Paul Rester, the former head of interrogations at Guantanamo, said the "language has softened" over the years in many terrorist detainee cases.

"The only thing that could have changed is someone’s perception that al Sabri or someone like him mellowed – that they don’t pose much of a threat anymore," he said.

But, Rester noted, "we can't run a jail indefinitely."

"The problem with Guantanamo from Day One is the conflation of rule of law with law of war," he said.

Obama promised during his presidential campaign to close the military prison, but lawmakers have so far blocked any plans to turn prisoners over to the U.S. penal system. Scores have been released over the last few years, typically sent to their homelands or to countries that have agreed to detain or monitor them, including Saudi Arabia, Qatar, Senegal and Uruguay.

The military prison once held more than 600 suspected terrorists, but there are now just 80, including 26 more who are expected to be sent to their homelands or to another country by the end of the summer.

Several detainees have returned to the fight against the U.S. once released, including Ibrahim al-Qosi, a Sudanese native who once served as Usama bin Laden's cook, chauffeur and bookkeeper, and is now believed to be a senior Al Qaeda leader in Yemen. In March, a U.S. official told lawmakers that Americans have been killed by Guantanamo Bay detainees after they were released.

"What I can tell you is unfortunately there have been Americans that have died because of [Guantanamo] detainees," Paul Lewis, the Pentagon's special envoy for Guantanamo detention closure, said, though he declined to provide the GOP-led House Foreign Affairs Committee with details.

Maj. Gen. Jay Hood, who once oversaw operations at Guantanamo, said the Saudi rehabilitation program for militant Islamists is well-intended and should be applauded.

But, Hood said he has "little confidence in the Saudi authorities' ability to monitor the movements of Yemeni GTMO detainees placed in their custody."

"If history is a guide, we can expect to see some number of them back in the fight soon," he said. "As a group, the Yemenis held at GTMO represented the most committed and violent of the Islamic extremist in US custody."

For Lippold, a 41-year-old commander in October 2000, the memory of that morning is still fresh in his mind.

"We had pulled in on a beautiful, hot day for a brief stop for fuel," the 57-year-old Lippold recalled, saying he expected to be in port for six to eight hours.

Forty-five minutes later, at 11:18 a.m., there was a "thunderous explosion" that violently thrust the ship up to the right, Lippold said.

"I knew instantly something had come along our left-hand side and exploded," he said. "We were fighting for our lives to keep the ship afloat."

"The crew responded as true heroes, exactly as they were trained."