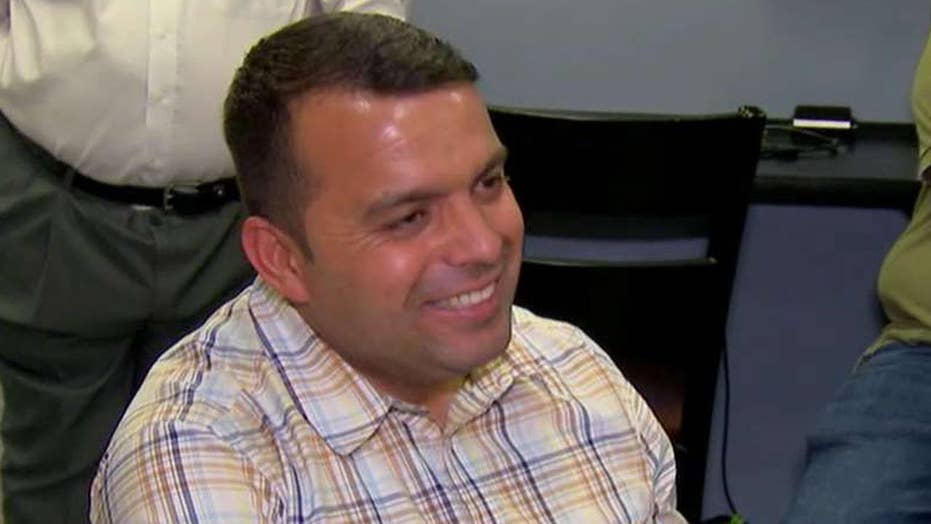 Afghan interpreter embarks on a new life in the US

The soldiers who served with him in Afghanistan call him "Fred."

Fraidoon Akhtari participated in more than 500 combat missions, translating for the U.S. military for the past 13 years.

On Sunday, after a harrowing wait of nearly five years, Fred and his wife and two children walked through the arrivals hall at Dulles International Airport outside Washington, D.C.

Sgt. Ryan Craig and 25 members of the Pennsylvania National Guard's 103rd Armor Regiment, and the veteran charity No One Left Behind greeted him at the airport, recalling how he saved all of their lives at a remote combat outpost.

“Completely cut off, no air support, limited artillery support, and throughout the entire battle Fred was redirecting us, 'Hey, they're going to come from the east side. They're going to come from the west side, you guys need to shift fire this way,'” Craig, who recently separated from the Army, recalled. “And just giving us that valuable actionable intelligence that single-handedly kept all of us safe.”

It took years of pushing an entrenched U.S. government bureaucracy to get Fred and his family a Special Immigrant Visa to the U.S. and out of harm's way.

Former FBI agent David Lemoine disobeyed his doctor who told him not to fly after open heart surgery a month ago. He arrived from Omaha, Nebraska, where Fred and his family will be resettled with the help of Lutheran Services. He explained what would have happened had Fred stayed in Afghanistan.

Fred had trouble getting a visa “because he assisted in the capture of a high-ranking Taliban member,” Lemoine said. “So a death threat was placed on his life and they put a note on his father’s door and they said, ‘We know where your son is going... he will be captured alive and he will die like no other.’”

After walking out of Customs and past a “Welcome to America” sign, Fred embraced each member of his old unit as they stood in honor formation. He explained what the Taliban would do to him if he had stayed in Afghanistan after having worked for the U.S. military. He would not allow us to photograph or name his wife and two young children.

“They shot my car two times with an RPG (rocket propelled grenade. They shot me many times, but couldn't kill me. They sent a threat to my family a few times, but they couldn't kill me because I had good friends with me here and in Afghanistan. They protect me and I am here today,” he said, standing inside the USO where veterans are welcomed each day.

He began tearing up when asked how he felt to be in America at long last.

“My mom and dad back in the country, they are upset, but my wife and my kids are happy to be here,” he said. “My hope is my kids grow up like Americans… to study hard, and be human.”

He then turned to the soldiers from the Pennsylvania National Guard who had driven from across the country to greet him and had set up a GoFundMe page and raised money for his airline tickets -- and had enough left over to buy him a used car.

If they had not, it would have taken another six months for the State Department to issue his ticket and he would have had to pay the government back.

“For these guys, I do not know what to say, they are the greatest people,” he said. "They are members of my family.”

Originally a mistake on his employment record held up his visa. It took lawyer Sari Long, who was given Fred's case by the International Refugee Assistance Project, three years of pressing the U.S. government and a military contract employer. Eventually, she wore him down. The soldiers from his unit call Long “a pitbull in a skirt.”

“He is the poster child for the special immigrant visa program. He put in 10 years of service, he was in over 100 firefights and incidents shoulder-to-shoulder with his U.S. soldiers he was working with,” Long explained as she teared up talking about her pro-bono client.

“They put their lives on the line for us and I believe we should just do everything we can to help them out,” said Sgt. David Shiner, who led the GoFundMe effort.

There are 14,000 Afghan translators who have served since 9/11 still waiting for Special Immigrant Visas, according to No One Left Behind. Escaping the Taliban, and making it to America, where the cost of living is high, is just the beginning of the struggle for many of them.

“There are guys sleeping under bridges that should be in apartments, and we're breaking our promise to these guys,” the retired FBI agent Lemoine explained, holding a folded American flag in his hands to give to Fred.

No One Left Behind is lobbying Congress to give “honorary” veteran status to these Afghan and Iraqi interpreters who risked their lives for the U.S. government. But many are proud and don’t want government handouts and don’t use some of the government services available to them. Food stamps, for instance. They prefer to work.

"No, we are not asking for Title 34 or (Veterans Affairs) benefits,” James Miervaldis, who volunteers with No One Left Behind, explains. "This is an honorary title that will allow 56,000 501(c)(3) non-profits to use their money for our new veterans."

No One Left Behind wants Congress to increase the quota of Special Immigrant Visas in the Defense Authorization Act being debated this week on Capitol Hill. Right now, there are none in the bill that passed the House on Friday.

These soldiers, on the other hand, believe in the Soldier's Creed; "Leave no one behind."

I am an American Soldier.

I am a warrior and a member of a team.

I serve the people of the United States, and live the Army Values.

I will always place the mission first.

I will never accept defeat.

I will never quit.

I will never leave a fallen comrade.

I am disciplined, physically and mentally tough, trained and proficient in my warrior tasks and drills.

I always maintain my arms, my equipment and myself.

I am an expert and I am a professional.

I stand ready to deploy, engage, and destroy, the enemies of the United States of America in close combat.

I am a guardian of freedom and the American way of life.

I am an American Soldier.