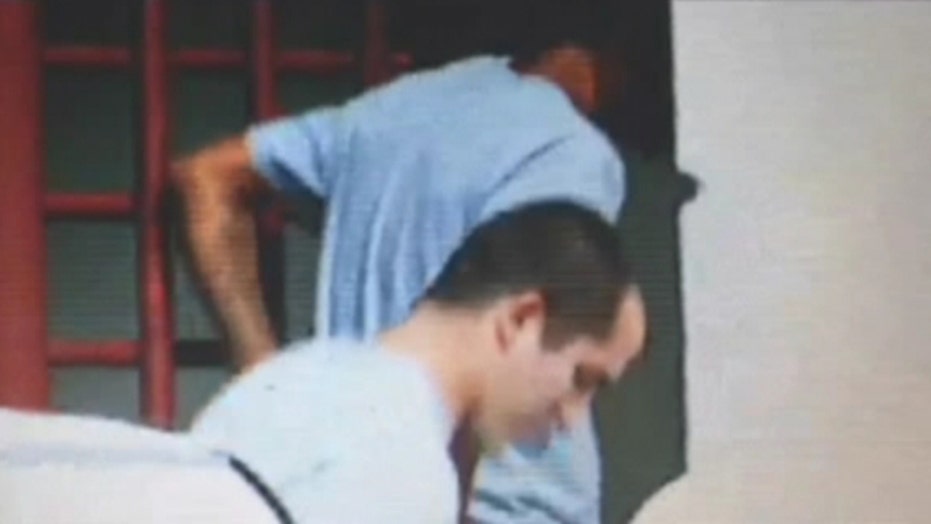 Raw video: Sgt. Tahmooressi arrives at federal courthouse in Tijuana, where he makes his first appearance before a judge two months after accidentally crossing the border with three registered guns

The U.S. Marine who for two months has sat in a Mexican jail cell following his arrest for mistakenly crossing the border with registered guns in his pickup, fired his attorney before appearing at a hearing Wednesday for allegedly telling him to lie to authorities, Fox News has learned.

Sgt. Andrew Tahmooressi, arrived shortly after 9 a.m. local time at the federal courthouse in Tijuana, where fired attorney Alejandro Osuna and a court-appointed, temporary lawyer represented him. Tahmooressi's mother confirmed the change in legal teams, but did not divulge the name of her son's new attorney.

"He now has a new lawyer who we have more confidence in," Jill Tahmooressi said from her home in Westin, Fla.

Tahmooressi, handcuffed and looking gaunt in a gray prison-issue T-shirt, arrived in a police van for the 90-minute hearing. Minutes before he arrived, State Department diplomat and American Citizen Services Chief William Whitaker, who is attached to the U.S. Consulate office, rushed past reporters and headed into the building a half-hour before the appearance, but did not speak to reporters.

After the hearing, Osuna spoke to reporters and confirmed he had been fired. He said the legal change prevented Tahmooressi's accusers, two Mexican Marines and two border officials, from testifying because the new legal team was not prepared to question them. He said Tahmooressi did not give a statement.

"Andrew is innocent and regardless of who his attorney is, his innocence will come out," Osuna said.

Tahmooressi was later packed into a bullet-proof pickup truck and taken back to a federal lockup in El Hongo after the appearance. He is scheduled to appear in court again on June 4.

"Andrew kept insisting he wanted to change it,  but our concern was that if he mentioned he had been in Tijuana about six times prior to his detention (which seems to be the case), his story would have been less credible," Osuna wrote in the email,obtained by FoxNews.com.

Tahmooressi wishes to "set the record straight" after "being directed to misrepresent the situation," Hunter spokesman Joe Kasper told FoxNews.com.

Before he was fired, Osuna said the Marine would be called to tell his story to Judge Victor Octavio Luna Escobedo. The Mexican customs agent and soldiers involved in his arrest were also to make statements.

When asked after the hearing if he had previously told Tahmooressi to lie, Osuna said: "My response to that is 'no.' But I don't want to get into that. We've had our differences about how things happened."

Since his arrest, Tahmooressi has faced death and rape threats, has had his feet and hands shackled and lost weight, according to his mother, who has been able to visit him and speaks with her son by phone several times a week.

When Tahmooressi realized that he was entering Mexico with the weapons at the poorly-marked crossing at the San Ysidro checkpoint, Tahmooressi immediately called 911, but was told by American officials that since he was in Mexico there was nothing they could do to help him. One Mexican customs official reportedly was going to accompany Tahmooressi back across the border but was quickly overruled by a soldier.

Mexican authorities have accused Tahmooressi of changing his story, possibly over whether he had ever been to Tijuana. By his own admission, Tahmooressi acknowledged at the border he had registered weapons and that he had no intention of even entering Mexico. That should have allowed him to turn around, according to U.S. border officials, who told Fox News the entire ordeal could have been stopped with a little discretion and a phone call or two.

Tahmooressi, who fellow Marines described as selfless and disciplined, appears to be in a better frame of mind in recent days, according to his mother. Wednesday's hearing was the first of several, with subsequent proceedings to involve hearing the 911 tape and bringing court officials to the border crossing.

A State Department spokeswoman said Secretary of State John Kerry raised the issue with Mexican officials, but the Obama administration has said little publicly about the case.

But on the border, there has been a groundswell of public support for Tahmooressi, with a demonstration planned to occur at the border Wednesday.

“Tension is building," said Gina Loudon, of the Patriot Coalition of San Diego County, which organized the demonstration. "Many in the U.S. think it is unjust, un-American, for this brave Marine who fought for our freedom to spend Memorial Day in a Mexican prison.

"This American citizen made an honest mistake," she said. "The border is very confusing, he should be afforded the same courtesy that we have extended to Mexican citizens in similar circumstances. He should be released immediately."