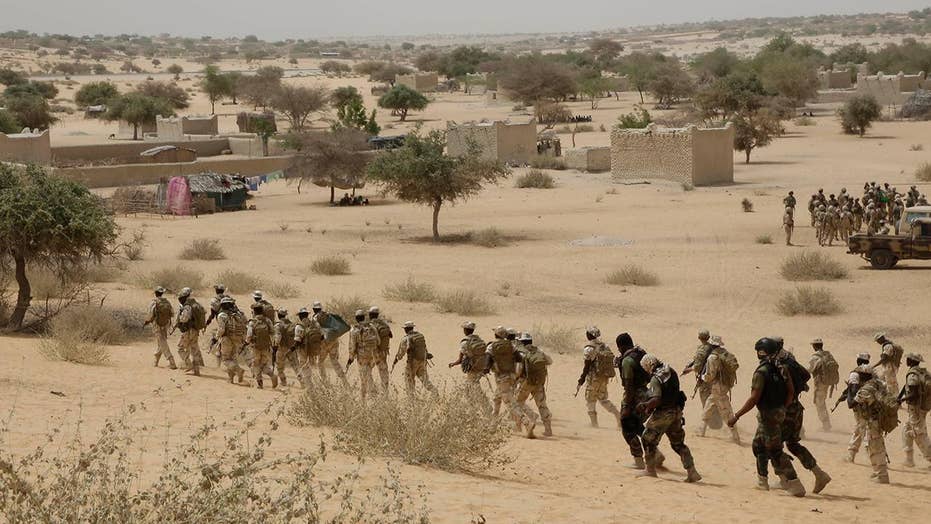 Eyewitnesses give accounts of how they found Sgt. La David Johnson's body after the attack; Kristin Fisher has the details for 'Special Report.'

American forces in Niger were the targets of yet another terrorist ambush, a December attack disclosed by U.S. Africa Command on Wednesday -- the latest revelation coming amid the fallout from a deadly October ambush and as lawmakers increasingly question the U.S. mission in the African country.

U.S. Africa Command said the Dec. 6 ambush, in which 11 ISIS fighters were killed and no U.S. or Nigerien troops were injured, happened in the Lake Chad Basin area during a mission to “set the conditions for future partner-led operations against violent extremist organizations in the region."

“A combined force of Nigerien and U.S. military members came under fire from a formation of violent extremists,” Africa Command said in a statement to Fox News. “We assessed 11 enemy killed in action, including two wearing suicide vests, and one weapons cache destroyed during this mission.”

An official that spoke to the New York Times on condition of anonymity said it was one of the first major forays for U.S. troops back into the field since the Oct. 4 ambush.

The official said Green Berets were assisting Nigerien troops on a multiday operation in early December near Diffa, a city near the country’s border with Nigeria. Their goal was to clear a potentially hostile area so the Nigeriens could set up a base there, but it is not clear if that base was ever built, the New York Times added, citing the official.

The attack was not mentioned in testimony to Congress this month by Gen. Thomas D. Waldhauser, the head of Africa Command, but a senior House Republican aide told the New York Times that lawmakers were made aware of it in December, shortly after it happened.

The incident followed an October attack in which four U.S. soldiers were killed after their convoy in Africa was hit by rocket-propelled grenades and heavy machine gun fire.

About 50 Islamic extremists ambushed the group of U.S. and Nigerien troops in that attack, wounding two additional Americans and killing 10 Nigeriens.

The team reportedly was in unarmored trucks when the ambush occurred on a return route from the capital city of Niamey. The group was ambushed by ISIS-affiliated militants traveling by vehicle, and the terrorists were likely tipped off by local villagers.

Gen. Joseph Dunford, Chairman of the Joint Chiefs of Staff, has said air support wasn't requested for the attack area until an hour after the ambush began. It took two French Mirage fighter jets 30 minutes to respond to the request, and the jets weren’t overhead until two hours after the battle started.

After the deadly ambush made headlines, several lawmakers expressed concern with decisions leading up to the attack -- while others in Washington admitted being surprised there were any U.S. troops in Niger.

Dunford also said following the attack that the military still needs to investigate several matters, including: whether the U.S. had adequate intelligence and equipment for its operation, whether there was a planning failure and why it took so long to recover the body of Sgt. La David Johnson.

Brig. Gen. Donald C. Bolduc, a former United States Special Operations in Africa commander, told the New York Times on Wednesday there have been around 10 instances of American troops and their partners being attacked in Niger and West Africa between 2015 and 2017, wth those engagements resulting in no American casualties.

U.S. forces have been in Niger for more than 20 years and a joint special operations task force was created by the U.S. in 2008.

But the presence of American soldiers in Niger has reignited a debate about the Authorization for Use of Military Force – a public law enacted after the 9/11 terrorist attacks. At issue is whether the law gives the president the authority to take action against all terrorist organizations, not just Al Qaeda and the Taliban.