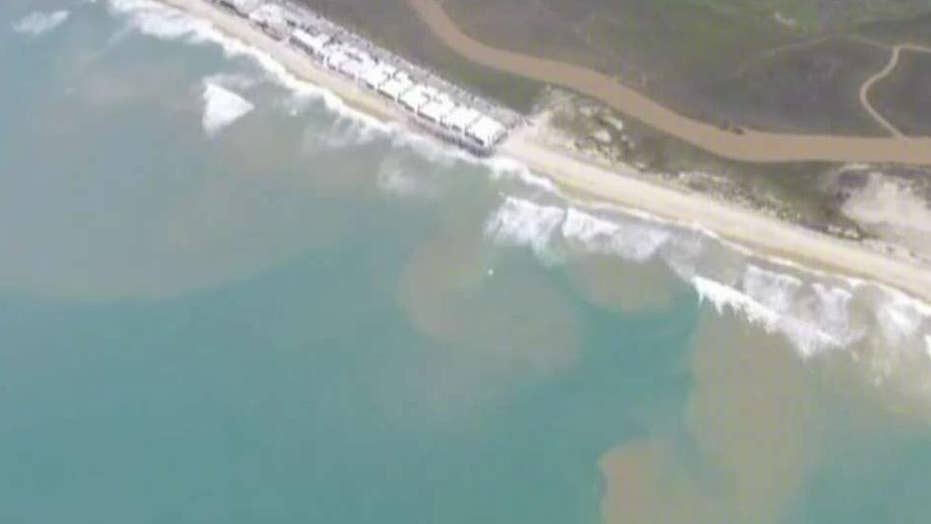 IMPERIAL BEACH, Calif. – Up to 200 days a year, this otherwise pristine beach in Southern California is closed because of raw sewage and industrial waste from Mexico, a treaty violation for which Washington has shown little interest in enforcing.

"Unfortunately, the U.S. government seems to be in the mode that everything's fine and don't worry about it," says Imperial Beach Mayor Serge Dedina, who got sick last week after surfing in the contaminated water. "That doesn't fly anymore."

The Port of San Diego and several other cities are joining Imperial Beach to sue the U.S. government and, more specifically, the State Department for failing to enforce a treaty that obligates Mexico to treat its sewage before sending it to the U.S.

Contaminated water signs are placed along the sand following a rain storm in Imperial Beach, California December 4, 2014. The alert was issued because of a rain-driven influx of sewage-fouled water from the Tijuana River, according to the San Diego County Department of Environmental Health. (Reuters)

"Literally and, pun intended, they don't give a crap, it's just not a big deal to them," says U.S. Border Patrol agent Chris Harris. "Mexico has the money. It just isn't a priority to them."

Harris represents some 300 rank-and-file agents who patrol the area to keep out illegal immigrants. At least 83 agents filed complaints this year claiming they were affected by the waste, from respiratory problems to skin lesions and burns from the heavy metals dumped into the Tijuana River by the hundreds of industrial plants known as Maquiladora's that moved south to avoid stringent American environmental rules.

"People are getting sick miles from the beach. It is really, really devastating," says Dedina. "Tijuana is Mexico's fourth largest city. Their sewage system is at the brink of collapse. There's sewage spills and sewage leaks all over the city that get reported on by the Mexican press and their own beaches are filled with sewage nonstop."

When Tijuana does have a break, it is supposed to call its counterparts in the U.S. at the International Border and Water Commission. Dedina and court records assert Mexico fails to report the spills on a regular basis, including a 250 million-gallon spill in February

"The worst part of that is we kept calling and calling and calling authorities in the U.S. and Mexico.  Literally, they didn't pick up the phone. There was no response until after three weeks and they told us there was this 250 million-gallon spill," Dedina said.

Dozens of swimmers and surfers reported being ill, some going to the hospital with E. Coli poisoning. Border agents also reported symptoms.

"What we won't accept anymore is working in a sewage or chemical waste dump," Harris said. "I personally got it on my arms and literally within a minute, I had a huge rash. My supervisor said go to the hospital. I had to get a prescription topical and an oral medication."

Besides a slow federal response, Harris blames the state of California, which is tough with corporate and individual polluters, but takes a velvet glove-approach with Mexico, despite emissions of toxic chemicals and metals like chromium, cadmium and lead that has burned the soles and laces of border agent boots.

"Where is the governor of California?" Harris asks. "Gov. (Jerry) Brown is going around the world saving the world for the environment. God Bless. But what about this environmental disaster down here? He is nowhere."

Brown responded through the state EPA, which said it had allocated money to investigate the situation. He also said Mexico estimates the cost of repairing the city's broken sanitation system to be about $400 million.

"The reality is, this is not rocket science," says Dedina. "It's just sewage. We need to upgrade the sewage system, put in some storm water and sewage capture-systems basins on the U.S. side of the border and fix their problem. We're not asking for a miracle. We're just asking for some basic engineering. We just need to punch Mexico harder."