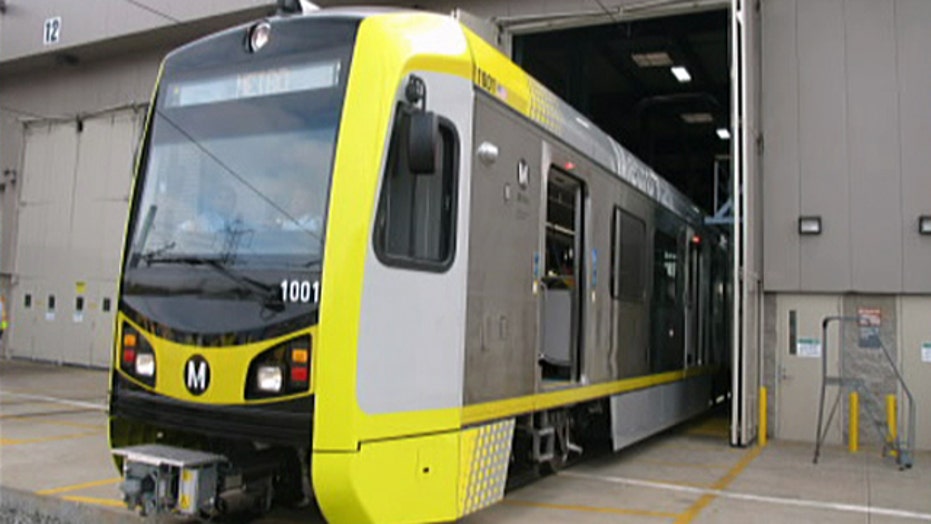 The California city of Palmdale was ready to roll out the red carpet this summer when a Japanese company agreed to build a $60 million factory on a city-owned, vacant parcel on the southwest side of town -- but now the company is taking its project out of state and critics say union greed is to blame.

As many as 300 people were slated to work at the 400,000-square-foot plant, painting and wiring light rail cars under a huge contract with the Los Angeles Metropolitan Transportation Authority. It was a coup for Palmdale Mayor Jim Ledford, and a plan that seemed to suit Kinkisharyo International, which last year moved its U.S. headquarters from Boston to El Segundo, Calif.

"I believe this is just the beginning of a manufacturing renaissance here in the Antelope Valley,” crowed Ledford in June.

“We’ve been waiting for this day for a long time,” added Palmdale Economic Development Director Dave Walter. “So many people and organizations played huge roles in making this a reality."

But a newly formed environmental group -- which critics say is a front for a local union -- had other ideas.

The "Antelope Valley Residents for Responsible Development," a group backed by the International Brotherhood Workers Union Local 11, produced a 588-page appeal claiming that construction of the proposed factory would violate state environmental laws, by, among other things, kicking up spores. What the union really wanted, according to Kinkisharyo officials, was clearance to organize the plant without any interference from the company. When Kinkisharyo officials balked, the project suddenly became a potential environmental hazard.

“They are using California’s environmental laws as a pretense to put leverage on the company to get what they want,” Kinkisharyo spokesman Coby King told FoxNews.com. “It’s unfortunate when groups that don’t care about the well-being of the environment use the laws to delay, and even kill, good business development.”

Kinkisharyo, the El Segundo-based U.S. subsidiary of Kinki Sharyo Co., is currently assembling 78 light rail cars for Metro, with delivery of the first car expected this month. The company has exercised an option to build an additional 97 cars under a 10-year, $891 million contract with the MTA. For now, the company is doing the work from a hangar in Palmdale. But after delays the company has said have cost it $2 million, Kinkisharyo is looking out of state for a site to build its plant.

“The company is disappointed," King said. "They would have liked to stay in Palmdale.”

The standoff began shortly after the June announcement, when Local 11 officials sought a so-called card check agreement, where a company accepts the union if a majority of workers sign authorization cards. Absent such an agreement, the National Labor Relations Board would authorize a secret ballot during an organizing campaign the company would be free to oppose. The company said no thanks.

"We offer good salaries and good benefits, and we've never had a labor issue," Donald Boss, Kinkisharyo's general manager of program management, told The Los Angeles Times. "If our employees want to organize, they can. But we aren't going to organize for them."

Kinkisharyo officials say that's when the environmental issues suddenly arose. The complaint alleged Kinkisharyo did not secure proper water rights and that the project could spread spores that carry valley fever.

"The union claims are not truly about the environment, they are about trying to force union representation on the plant," said Gary Toebben, president and CEO of the Los Angeles Area Chamber of Commerce.

A union spokeswoman denied that the environmental concerns were motivated by the company's opposition to its efforts to organize workers..

“That’s absolutely not the case,” said Elizabeth Brennen, of IBEW Local 11 said to FoxNews.com. “Obviously union support is important, but so are the environmental concerns.

“Water rights are a serious issue that needs to be addressed,” she said.

Ledford feels the union's efforts are letting a rare opportunity to create jobs and increase tax revenues slip away in a depressed area that still faces double-digit unemployment.

“We’ve played by the rules," Ledford told FoxNew.som. "It’s just not right. Their game is to delay to get their way.

“I just want to get my people back to work,” he said. “We should be working together to retain, instead of bleeding, jobs.”

In what may have been a last-ditch effort to stay in Palmdale, Kinkisharyo proposed renovating the hangar it is currently using, Ledford said. But the union-backed environmental group again challenged the plan and the company has already begun an out-of-state search, saying an appeal of the union-backed complaint would be too costly.

"We are looking at some out of state options," King told FoxNews.com. "West of the Mississippi."