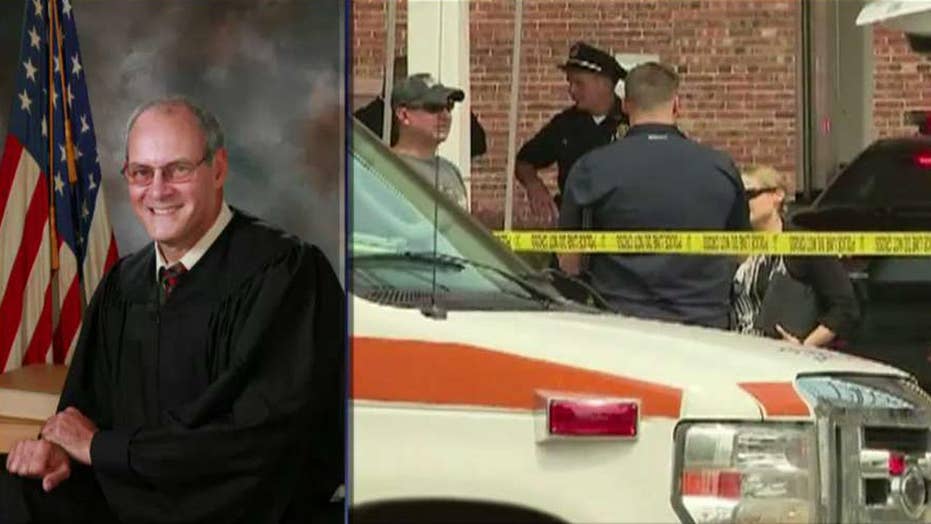 The county judge in Steubenville, Ohio was making his way to work at the courthouse on Monday morning when the angry father of a convicted rapist walked up and shot him.

Judge Joseph Bruzzese Jr., who was carrying a concealed weapon, fired back at the man, who then was fatally shot by a probation officer.

A few weeks ago, an inmate in Tennessee grabbed a county sheriff deputy’s gun during a hearing and shot him and another officer. The inmate fled the courthouse and fatally shot himself.

As violence inside and near courthouses grows, judges increasingly are choosing to carry concealed weapons, experts say.

Judge Eugene Lucci, who presides over cases in an Ohio county courthouse and sits on the board of the American Judges Association, says there’s a clear concern among his colleagues in the judicial world about safety.

Lucci, who delivers talks to judges about protecting themselves, says he’s seen an unmistakable interest in carrying concealed firearms.

“Based on the number of requests that I get to speak on the topic, there’s definitely an uptick in interest by judges,” Lucci said, adding that while judges are more of a target for violent attacks than they once were, carrying a concealed weapon is not for everyone.

“It’s never wise to carry a firearm without training or experience,” said Lucci, who takes refresher firearms training about three times a year. “That weapon, in your hesitance based on lack of confidence and training, can be used against you, and you can make a mistake.”

Lucci says that judges face the most danger outside the courtroom, which is secured by armed officers most of the time.

“Judges are more vulnerable in when they’re parking in their spot, which is marked ‘Judge,’ and that’s where Bruzzese was, the guy was lying in wait for him.”

Last year, a Cincinnati man who lost custody of his children threatened to kill two county judges, adding that he knew where they lived. They judges filed emergency affidavits to carry concealed weapons.

“It’s getting dangerous out there,” retired Judge Norbert Nadel of Ohio was quoted as telling WCPO.com. “Times have changed. Originally, I was against courthouse security. Now, I’m for it.”

William E. Raftery, a senior analyst with the non-profit think tank National Center for State Courts, based in Virginia, said that courts often are emotional minefields where rage can erupt at any moment, particularly by people who feel wronged by those who made an arrest or hand down a jail sentence.

“The courtroom is a place of highly charged, highly emotional, highly sensitive cases,” said Raftery, who has written reports about weapons in courthouses. “It’s a two-pronged issue. There’s been an increase in judges who want to carry firearms, but more and more state legislatures are citing the second amendment saying anyone, not just judges, can carry firearms into a courthouse…Judges are saying ‘No, this is a safety issue…If they’re carrying a firearm in the courthouse, I’m carrying a firearm.’”

Legislatures in several states have passed measures allowing state workers and elected officials to carry concealed weapons to court buildings. In Ohio, a bill is pending that would allow people who have permits to carry concealed weapons to bring them into courthouses, according to published reports. Those who have proposed those laws say that people who legally possess guns should be able to protect themselves in public buildings.

Many judges still remember the 2011 bloody rampage in an Atlanta courtroom by a man on trial for a rape who managed to wrestle a gun from a sheriff’s deputy. The man, Brian Nichols, killed the judge presiding over his case, a court stenographer and a sheriff’s deputy.

That came on the heels of the Chicago murder of a judge’s husband and mother by a man who lost a case in the judge’s court.

Lucci, who himself has been threatened numerous times, said that in his county, judges have been the target of murder plots.

In one case, several people acquired bomb-making materials with the intention of exploding it near a judge, Lucci said. In another, a person who was angry over a delinquent tax bill hired a hitman to kill a judge, he added.

“This happens much more frequently than most people would imagine,” Lucci said. “The days are long gone when judges were immune from threats or assaults…There’s a lack of respect for the law, persons or property.”