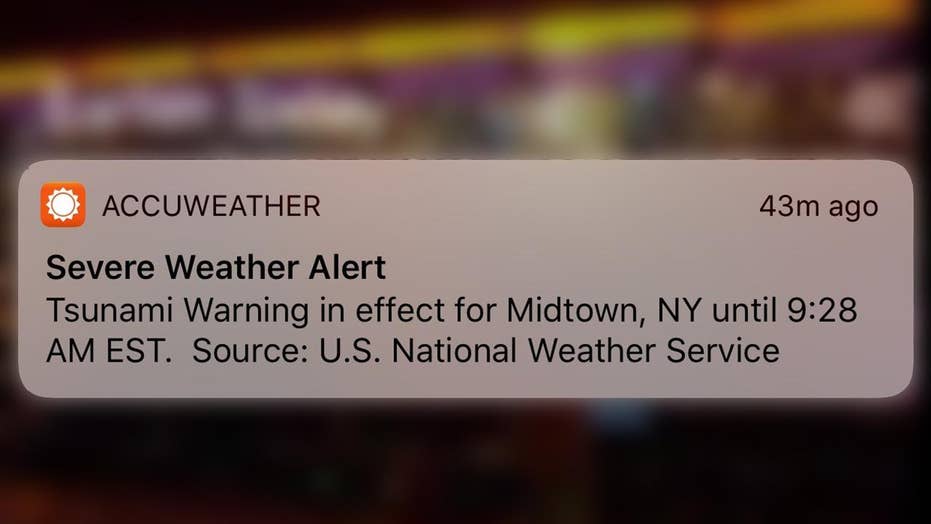 A Tsunami warning push alert sent to phones across the nation Tuesday morning sparked fear, worry and confusion -- but the alarm was all due to a glitch that occurred during a National Weather Service test, the organization said.

Users on some mobile apps, including Accuweather's, received what looked like an actual warning on their lock screens. Officials initially said it appeared to be an issue with the popular Accuweather app, but the company said the message was "miscoded by the NWS as a real warning."

"AccuWeather has the most sophisticated system for passing on NWS tsunami warnings based on a complete computer scan of the codes used by the NWS," the company said in a statement. "While the words 'TEST' were in the header, the actual codes read by computers used coding for real warning, indicating it was a real warning."

The company said the warning appeared on other sources, such as The Weather Channel and on the NWS website as a real warning.

An alert sent to people about a tsunami warning early Tuesday that the National Weather Service says was just a test. (Mykel MacCarthy/Fox News)

"The NWS is the original source of the information and displayed it as a real warning," the company said, adding that "the responsibility is on the NWS to properly and consistently code the messages, for only they know if the message is correct or not."

The alert caused many to take to Twitter to share their confusion and panic about the false alarm.

"Just got a Tsunami Warning for New York, but apparently it’s just a test. Thank you for the morning panic attack, @accuweather!" Katia Del Negro tweeted.

“This took 4 clicks in @accuweather to find out that the Upper West Side Tsunami Warning issued is only a test. Congrats to the Hawaiian Missile Alert Guy on his new gig at @NWSNewYorkNY,” Twitter account West Side Yenta posted.

Jeremy DaRos told the AP the alert made him "jump" because he lives near the water in Portland, Maine, and was aware of a recent spate of small earthquakes that made the alert seem plausible.

"Looking out the window and seeing the ocean puts you in a different frame of mind when you get a tsunami warning," he told the AP. Once he opened the message, he realized it was only a test.

Meteorologist Hendricus Lulofs told the Associated Press the incident occurred because of a glitch during a routine test around 8:30 a.m., and the NWS was investigating.

The error occurred only weeks after the highly-publicized incident in Hawaii. In that case, a correction for the warning was delayed by several issues. On Tuesday, however, several weather centers went to pains to make sure those who received the alert quickly knew it was a test.

Accuweather tweeted: "The National Weather Service Tsunami Warning this morning was a TEST. No Tsunami warning is in effect for the East Coast of the U.S.

The National Tsunami Warning Center also pitched in, saying it "did NOT issue a tsunami Warning, Watch, or Advisory for any part of the United States or Canada this morning."

In its statement, Accuweather said this is not the first time "legitimate warning coding was embedded erroneously by the NWS and consequently triggered alerts" and that the company's CEO previously wrote to the NWS three years ago about the issue.

"We understand the reason for test messages, but we feel that NWS consider fail safe measures for the future to prevent such an occurrence," CEO Barry Myers wrote at the time. "The issuance did say it was a "TSUNAMI WARNING," but it was not a tsunami warning, rather simply a test of the system. We note that the method currently used of relying on the "TEST" in the header of the product and a test in the VTEC status, as the identifying device for software coding in numerous programs and systems used by a plethora of companies to identify such messages, has proven to be a less than perfect system."

The glitch came hours before the House Homeland Security Committee was set to hold a hearing on the mid-January debacle in Hawaii.

The former state employee – a man in his 50s who asked to remain anonymous in a recent interview for his safety – said that he was “100 percent sure” that the drill on Jan. 13 was real, even though several other employees heard the word “exercise” repeated throughout the message, according to officials.