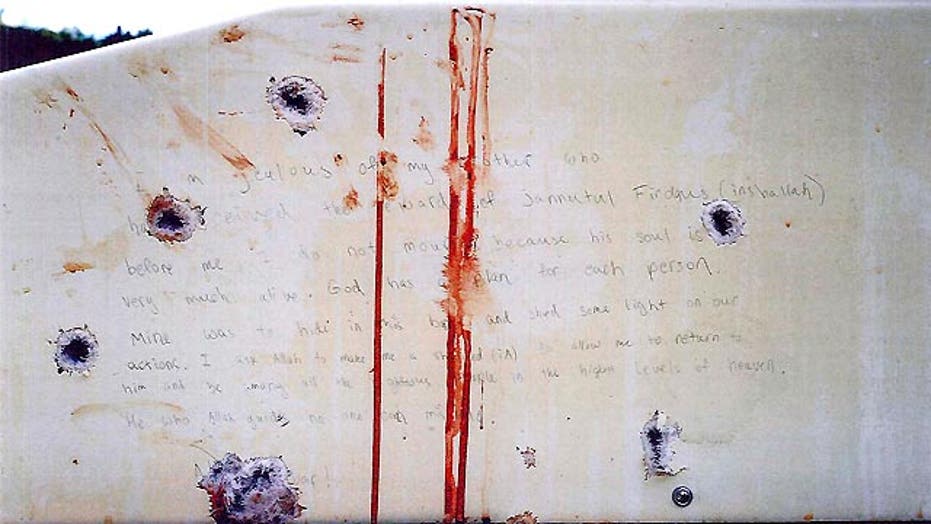 Jurors in the trial of Boston Marathon bomber Dzhokhar Tsarnaev were shown photos Tuesday of a hand-written, blood-stained note speckled with bullet holes inside the boat he was captured in days after the deadly 2013 attack.

Prosecutors consider the note a confession and say it refers to the motive for the attack carried by Tsarnaev and his late brother Tamerlan.

In the note Tsarnaev appears to decry U.S. actions in Muslim countries and says he is jealous of his dead brother because he is now in paradise.

"I do not mourn because his soul is very much alive. God has a plan for each person. Mine was to hide in this boat and shed some light on our actions," he wrote, according to the photos shown to the jury by prosecutors.

The note also said: "The U.S. Government is killing our innocent civilians but most of you already know that. As a M (bullet hole) I can't stand to see such evil go unpunished, we Muslims are one body, you hurt one you hurt us all. ..."

"Now I don't like killing innocent people it is forbidden in Islam but due to said (bullet hole) it is allowed."

Judge George O'Toole Jr. is still trying to decide whether to allow prosecutors to cut out and bring to court the panels of the boat to show jurors or whether to bring the intact boat to the courthouse to be viewed outside by the jury, as requested by lawyers for Tsarnaev, who is now 21.

The judge ended court early Tuesday so he could go see the boat, accompanied by representatives of the prosecution and defense teams. The judge rejected a request from the media to allow a pool reporter and photographer to also see the boat.

MyFoxBoston.com reported that one Tweet posted a day before the marathon, read, "It's our responsibility my brothers and sister to ask Allah to ease the hardships of the oppressed and give us victory over the kufr." A kufr is a non-believer.

On Monday, Jessica Kensky, a victim in the blast, talked about the scene moments after the first blast. She described chaos and remembers trying to shield her husband from viewing his leg. She says she didn't realize she was on fire until a man pushed her down and began extinguishing the flames.

She testified that she desperately did not want to be a double amputee.

"I wanted to paint my toenails and put my feet in the sand," she told the jury. "To lose my right leg was a gut-wrenching decision."

Three people were killed and more than 260 were injured.

Tsarnaev's lawyer acknowledges he committed the crime but says his older brother recruited him.

At the end of testimony prosecutors introduced into evidence a number of photographs taken before and after the bombing.

One photo taken before the bombing captured Kensky and her husband in the crowd. Behind the couple in the same picture, Tsarnaev could be seen.

Jurors also watched a timeline video compiled by the FBI using surveillance video from stores and restaurants near the marathon finish line. The video, which shows both brothers' movements around the time of the bombings, focuses on Dzhokhar and shows him carrying a backpack up until he gets to the front of the Forum restaurant, when he is shown dropping the bag from his shoulder.

One frame then shows the backpack at his feet. The backpack is in a crowd of people and just feet from children standing on a metal barrier, including 8-year-old Martin Richard, who was killed, and his younger sister, Jane, who lost a leg in the blast.

As the first bomb explodes, the video shows everyone in the crowd turning toward the blast. Tsarnaev does not look in that direction and instead begins to walk in the other direction.

Seconds later, the second bomb explodes, and Tsarnaev, who prosecutors say detonated the second bomb, is seen running with a crowd of people who are also running. People are also shown jumping over metal barriers as smoke wafts over the scene.