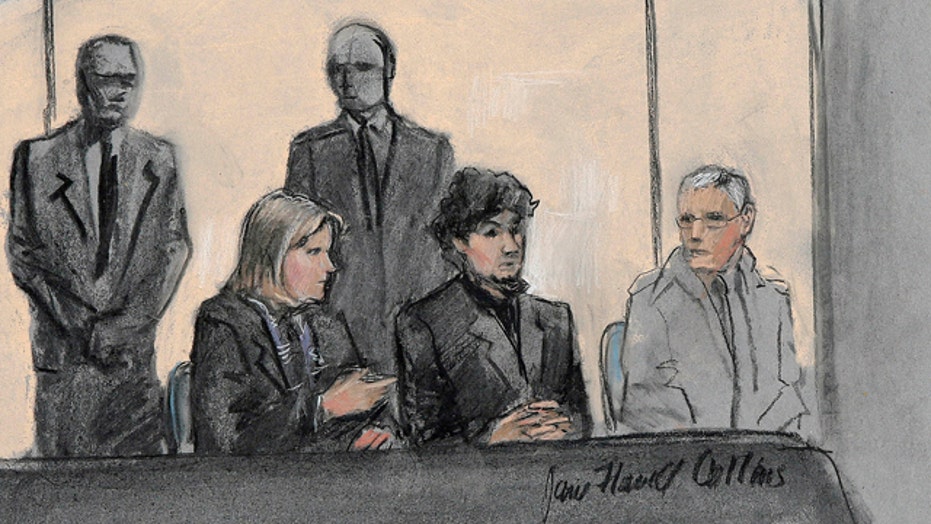 BOSTON – Three months before he bombed the Boston Marathon, Dzhokhar Tsarnaev told college officials he had been unable to concentrate on his studies because he had "lost too many" loved ones in Chechnya during the previous year, a school administrator testified Tuesday.

The jury in Tsarnaev's federal death penalty trial was shown a form he filled out to explain his poor grades at the University of Massachusetts-Dartmouth in 2012. Tsarnaev, then in his sophomore year, wrote that his relatives live in Chechnya, which he described as a republic "that is occupied by Russian soldiers that falsely accuse and abduct innocent men under false pretenses and terrorist accusations."

Tsarnaev said he was now at the point where he could focus on his school work. "I wish to do well so one day I can help out those in need in my country, especially my family members," he wrote.

Tsarnaev did not identify the family members or give any other information.

Mark Preble, the chief financial officer of UMass-Dartmouth, said Tsarnaev's appeal to restore his financial aid was denied after he submitted his explanation.

The jury was also shown a transcript of Tsarnaev's grades. He received three Fs and one B during the fall 2012 semester, the months before the bombings.

Three people were killed and more than 260 were injured in twin bombings near the finish line of the 2013 marathon.

Tsarnaev's lawyers admitted during opening statements that he participated in the bombings, but they said his older brother, Tamerlan, was the mastermind who recruited a then 19-year-old Dzhokhar to help him.

Jurors were also shown the white cap Dzhokhar Tsarnaev wore the day of the bombings. In video and still photos released three days after the bombings, Tsarnaev is shown wearing the white cap backward as he walks down the street carrying a backpack containing one of the pressure-cooker bombs used in the attack. FBI officials referred to him as "White Hat" before they learned his actual identity.

The hat, a Ralph Lauren Polo, had the figure of a man on a horse on the front and the number "3'' on the side. It was found on Tsarnaev's bed in his dorm room.

Kimberly Franks, an FBI agent, said investigators also found a box of BBs, a BB gun and a receipt for the gun in Tsarnaev's dorm room.

Authorities have said the bombs used in the marathon attack were filled with BBs, ball bearings and other metals. The BB gun was found at the scene of a police shootout with the brothers in Watertown four days after the bombings.

Christopher Donahue, a state police fingerprint specialist, testified that a partial fingerprint found on the outside of a box of 9mm bullets located at the Watertown scene matched Dzhokhar Tsarnaev's. Donahue said a partial palm print and a partial fingerprint of Tamerlan Tsaranev was found on the magazine of a 9mm Ruger handgun that authorities say was used during the shootout and to kill Massachusetts Institute of Technology police Officer Sean Collier hours earlier.

During cross-examination by one of Tsarnaev's attorneys, Donahue acknowledged that he found Tamerlan's fingerprints on bullets inside the box of ammunition, but no prints of Dzhokhar's were found on the bullets.

Tsarnaev's lawyers say it was Tamerlan who shot Collier.

Testimony is scheduled to resume Wednesday.