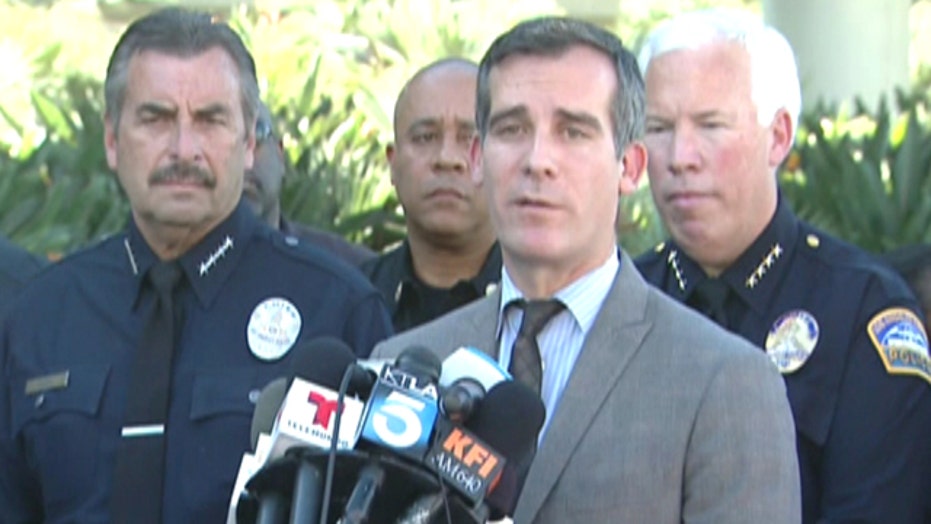 Officials give update after LAX shooting

The Transportation Security Administration officer who was killed Friday by a gunman at Los Angeles International Airport was a married father of two who worked at the airport for five years, a friend of the victim said Friday.

Friends and neighbors remembered 39-year-old Gerardo I. Hernandez as a proud father a good neighbor went door-to-door warning neighbors to be careful after his home in the Porter Ranch area of Los Angeles was burglarized.

"It's devastating because he was such a great guy," Kevin Maxwell, a friend and former TSA co-worker at the airport, told KNBC-TV. "All he talked about was his family. He was very proud of his son, who played football."

He also had a daughter, Maxwell said.

Hernandez is the first TSA officer killed in the line of duty in the 12-year history of the agency, which was founded in the aftermath of 9/11.

The FBI and Los Angeles Airport Police identified the gunman as Paul Ciancia, 23, of Pennsville, N.J. He had apparently been living in Los Angeles for about 1 1/2 years.

Los Angeles Mayor Eric Garcetti says the airport shooter was carrying a lot of additional ammunition. "There were more than 100 more rounds," he said.

Garcetti has asked that flags on city buildings be flown at half-staff and Los Angeles Police Chief Charlie Beck has asked officers to wear black bands on their badges to honor the TSA officer who was killed.

Hernandez was one of the behavioral detection officers that are stationed throughout the airport, looking for suspicious behavior, according to J. David Cox Sr., national president of the American Federation of Government Employees.

The Los Angeles Fire Department revised its total number of victims taken to hospitals from six to five, saying one had been double counted. Those numbers included Hernandez, Ciancia and one person who broke an ankle.

In an email to TSA employees Friday evening, TSA Administrator John Pistole said he would be traveling to Los Angeles on Saturday to meet with the "family of our fallen comrade" and the injured employees who are recovering from their wounds. He'll also spend time with the TSA workforce at LAX.

"Together, we will get through this," Pistole wrote. "Our faith will guide us and our professionalism will ensure our ability to carry out our mission."