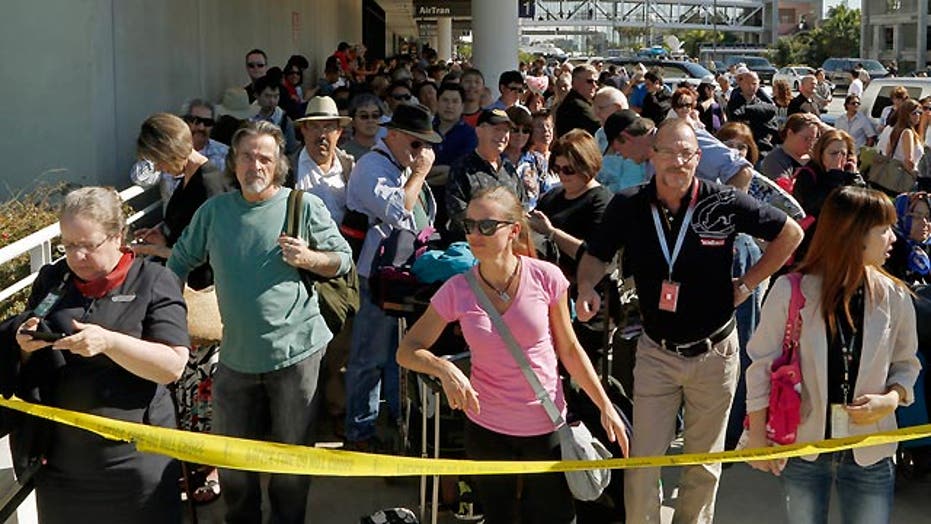 Police say the airport will partially reopen for flights

A gunman with an assault rifle opened fire in a crowded terminal at Los Angeles International Airport Friday, killing a Transportation Security Administration employee and injuring at least six before being wounded and taken into custody.

The suspect was identified by federal authorities late Friday as Paul Ciancia, 23, a Los Angeles resident, Fox News reported. The TSA identified the officer killed as 39-year-old Gerardo I. Hernandez.

The FBI said it had not interviewed him because he was hospitalized but expected to speak to him as soon as possible.

A note was recovered from a bag he dropped at a security checkpoint. It was described to Fox News as containing threatening language directed at the TSA and anti-government rants.

Los Angeles Mayor Eric Garcetti said the gunman had an additional 100 rounds of ammunition he did not fire.

The shooting incident, which sent passengers in the airport scrambling for cover, disrupted flights nationwide as planes headed for Los Angeles were temporarily grounded. In all, authorities said, some 746 flights were affected, including those diverted to other airports, held on the ground in Los Angeles or held at their originating airport.

The FAA lifted the restriction grounding departing flights at 7pm ET although Terminal 3, scene of the shooting remained closed.

"I am deeply saddened to inform you that a TSA employee was shot and killed today on duty at Los Angeles International Airport," said TSA administrator John Pistole in a message to employees. "Other TSA employees also were injured in the shooting."

J. David Cox, president of the American Federation of Government Employees, which includes the TSA union, told a late afternoon press conference the dead employee was a "behavioral detection officer," trained to detect behaviors that were "not right, not normal."

He was not immediately identified but Cox said he recently had transferred from Montana to LAX.

Dr. David Plurad of the Harbor-UCLA Medical Center said the dead TSA officer had suffered severe gunshot wounds to his chest and abdomen along with a "significant" blood loss.

Officials said seven people were injured , including six who were transported to area hospitals. Two male victims are in fair condition and one is in critical condition at Ronald Reagan Medical Center.

Gunshots rang out inside Terminal 3 at around 9:30 a.m.

Officials said the gunman pulled an assault rifle out of a bag on the ground floor of the terminal and opened fire. He ran up an escalator to a TSA screening area and continued to fire, officials say. He was tracked by airport police and they engaged in gunfight until the suspect was subdued, officials said.

Police do not believe there is another suspect after they conducted security sweeps inside the airport. The LAPD bomb squad conducted a sweep in both Terminal 2 and 3.

Witness Brian Keech said he heard "about a dozen gunshots" from inside the security gate at Terminal 3.

The Federal Aviation Administration grounded planes at other U.S. airports headed for Los Angeles, although some flights already in the air were allowed to land.

"The situation at LAX is very fluid," the FAA said in a statement. "There is currently a ground stop for flights that are scheduled to depart for LAX. This means those flights are temporarily being held at their departure airports.  Arrivals and departures are still occurring, and some flights may be diverted. The FAA is closely monitoring the situation and making adjustments to arrival and departure flows as needed. Passengers should contact their airline to determine the status of their flight."

Foote said his colleagues in the control tower saw passengers spilling from the terminal onto the tarmac, "evacuating the building, getting out as fast as they could." Officers eventually corralled them.

Other travelers described the scene as airport security staff evacuated terminals, including onto to the tarmac.

President Obama was briefed on the security incident and the White House is in touch with law enforcement, a White House spokesman said.

Bill Reiter, a writer for FoxSports.com, was at the scene and sent out a tweet: "When gunfire broke out there was a stampede people, all of us hiding under seats we didn't fit under, we burst through the door to outside."

Tory Belleci from the TV show "Mythbusters" tweeted: "Heard gun shots then everyone starting running for the door. Not sure if anyone was hurt."

According to multiple reports the suspect, described as a white male, may have been wearing camouflage when he walked into the terminal and opened fire. News media outlets reported that the shooter appeared to be targeting TSA agents at the security checkpoint, MyFoxLA.com reported.

The airlines that use the terminal are Allegiant Air, Frontier, JetBlue, Spirit, Virgin America and Virgin Australia. All upper level roadways are temporarily blocked by law enforcement.  The general public is being held back at law enforcement.  Other than arriving flights, flight operations have been temporary held.