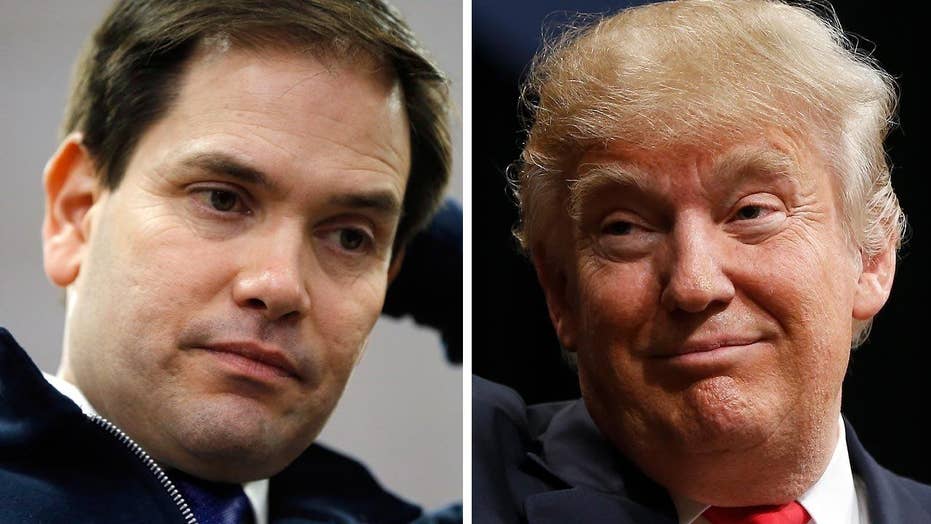 What if Rubio is demolished by Trump in his home state?

New poll shows Donald Trump leading by double digits over Marco Rubio in Florida, making Thursday's debate and Super Tuesday especially critical. Has the senator already lost? Fla. Rep. Ron DeSantis and the 'On the Record' panel break it down

Debate night for Republicans in Houston. It’s the last debate  before Super Tuesday. Donald Trump, Ted Cruz, Marco Rubio, Ben Carson and John Kasich will square off. They have no campaign events today as the prep.

There are new polls out today at 11am on Florida likely GOP voters. Great lead for us for Larry Sabato. Many analysts say Marco Rubio needs to win Florida to convince voters he can be a viable candidate. Yesterday Rubio said he would win the Sunshine State but early polling suggests Trump could win.

Here’s the New York Times today on Marco Rubio, “Senator Marco Rubio has persuaded wealthy donors, Republican Party elders and his colleagues in Congress that he represents their best chance to overtake the seemingly invincible force that is Donald J. Trump. He just cannot seem to persuade the voters."

Texas is also likely a must-win for Ted Cruz. Beth Reinhard and Janet Hook write today in the Wall Street Journal, “Three polls released this week show Mr. Cruz leading in Texas by margins of between one and 15 percentage points. But Mr. Trump's commanding win in the Nevada caucuses, his third victory in a row, means Mr. Cruz is going to have to fight that much harder on his home turf, starting with Thursday's debate in Houston.”

Trump’s dominance so far have many Republicans now facing the reality he may become the nominee. Noah Biermanin writes in the LA Times today,    “Republican leaders who view Donald Trump as a pox on their party have finally settled on a strategy: Resist him as long as they can. Then figure out how to retreat gracefully. Most mainstream Republicans still worry that Trump, who has dominated early GOP nominating contests and is poised to scoop up an even bigger bounty of delegates next week on Super Tuesday, would make a bad president. And they hold deep concerns that his incendiary rhetoric and ideological smorgasbord of ideas could damage the party, both politically and philosophically, so profoundly that it might never recover.”

Bernie Sanders unveiled a new line of attack after it appears he gave up on competing in South Carolina. He is campaigning in Ohio and Illinois today. He’s criticizing her support for the Clinton era welfare reform passed in 1996.

New AP/Gfk polling suggests Americans like the idea from Bernie Sanders for Medicare for all. Until you tell them taxes would need to rise.

Severe thunderstorms and tornadoes are likely again today from Florida to New York. It’s the same system that killed at least seven across the South and unleashed more than 20 suspected tornadoes. Tornadoes are rare in February, but there have been twisters every day this week. Virginia has declared a state of emergency as thousands remain without power. Parts of the Midwest are going to get more heavy snow. Chicago got heavy snow and high winds forcing hundreds of flight cancellations.

Lots of hearings to watch today. From the Fox News Agenda:

In a rare, open intel hearing, CIA Dir Brennan, DNI Clapper, FBI Dir Comey, NCTC Dir Rasmussen, NSA Dir Rogers, and DIA Dir Stewart all testify on worldwide threats currently facing the US and its assets. One issue certain to come up is encryption and the ongoing battle between Apple and the fed govt over the iPhone used by one of the San Bernardino terrorists.

European stocks shrugged off a massive sell-off overnight in China. A key Chinese index was down more than 6%.

The U.S. and China have agreed on new sanctions against North Korea over its nuke tests and missile tests. North Korea is urging its people to work harder with a “70-day campaign of loyalty.”  Thousands went to Kim Il Sung Square in a show of solidarity for the dictatorship.

NATO unveiled a new plan to try and stop the flood of refugees into Europe. Berlin voted to approve a package of measures to speed up the processing of refugees. Last year, German got 1.1 million asylum seekers.

Apple says it would like to make it even harder for the U.S. government to access suspect’s mobile phones. It comes as the company’s lawyers are preparing a response to a court order compelling it to help the FBI unlock an iPhone used by the San Bernardino terrorists.