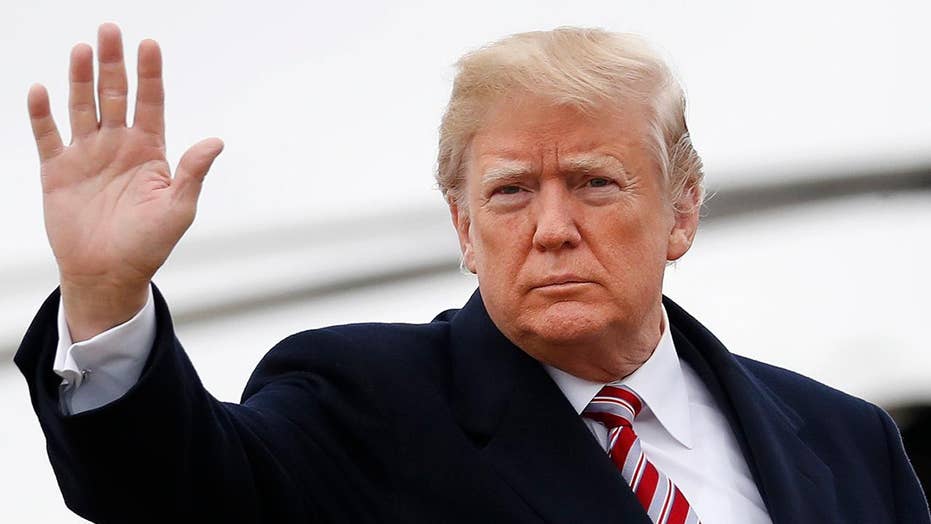 President Trump will walk from NoKo talks 'if not fruitful'

WASHINGTON – President Donald Trump said that although he's looking ahead optimistically to a historic summit meeting with North Korean leader Kim Jong Un he could still pull out if he feels it's "not going to be fruitful."

Trump said that CIA Director Mike Pompeo and Kim "got along really well" in their recent secret meeting, and he declared, "We've never been in a position like this" to address worldwide concerns over North Korea's nuclear weapons.

But speaking alongside Japanese Prime Minister Shinzo Abe on Wednesday, after the allies met at Trump's Florida resort, he made clear that he'd still be ready to pull the plug on what is being billed as an extraordinary meeting between the leaders of longtime adversaries.

"If I think that if it's a meeting that is not going to be fruitful we're not going to go. If the meeting when I'm there is not fruitful I will respectfully leave the meeting," Trump told a news conference. He also said that a U.S.-led "maximum pressure" campaign of tough economic sanctions on North Korea would continue until the isolated nation "denuclearizes."

"Just because North Korea is responding to dialogue, there should be no reward. Maximum pressure should be maintained," he said.

Trump has said his summit with Kim, with whom he traded bitter insults and threats last year as North Korea conducted nuclear and missile tests, could take place by early June, although the venue has yet to be decided. It would be the first such leadership summit between the two nations after six decades of hostility following the Korean War.

South Korean President Moon Jae-in, who meets with the North Korean leader next week, said Thursday that Kim isn't asking for the withdrawal of U.S. troops from the Korean Peninsula as a precondition for abandoning his nuclear weapons. If true, this would seem to remove a major sticking point to a potential nuclear disarmament deal.

Moon said the North still wants the United States to end its "hostile" policy and offer security guarantees. When North Korea has previously talked about "hostility" it has been linked to the U.S. troops in South Korea, so Kim's intentions remain unclear.

Other than the threat posed to by North Korea's weapons of mass destruction, another issue overhanging the summit plans is the fate of three Americans detained there. Trump said that was under negotiation and there was a "good chance" of winning their release, but he wouldn't say whether that was a precondition for sitting down with Kim.

Pompeo raised the question of the three Americans in his meeting with Kim, a U.S. official said.

Trump also said he had promised Abe he would work hard for the return of Japanese nationals abducted by North Korea. Tokyo says at least a dozen Japanese said to have been taken in the 1970s and 1980s remain unaccounted for.

News of Pompeo's trip to North Korea, which took place more than two weeks ago, emerged on Tuesday, as lawmakers weighed whether he should be confirmed to become secretary of state. Trump and Republican senators held up his highly unusual, secret mission as sign of Pompeo's diplomatic ability. But the prospect of his confirmation hung in the balance as Democrats lined up against him.

Sen. Robert Menendez, top-ranking Democrat on the committee that will have the first vote on confirmation, expressed frustration that the CIA chief had not briefed him on the visit that took place more than a week before Pompeo's public hearing last Thursday.

He is the most senior U.S. official to meet with a North Korean leader since Secretary of State Madeleine Albright met with Kim's father in Pyongyang in 2000.

"Now I don't expect diplomacy to be negotiated out in the open, but I do expect for someone who is the nominee to be secretary of state, when he speaks with committee leadership and is asked specific questions about North Korea, to share some insights about such a visit," Menendez said at the Center for Strategic and International Studies.

The Senate Foreign Relations Committee is expected to vote on the nomination next week. Pompeo, whose hawkish foreign policy views and comments about minorities have raised Democratic hackles, would replace Rex Tillerson, who was pushed out by Trump last month.

In the U.S. Senate, Republicans have a single-vote advantage on the 21-member panel that will have the first say on Pompeo's nomination. With nine of the 10 Democrats already declaring they will oppose Pompeo, and at least one Republican, Rand Paul of Kentucky, also opposed, the panel could be forced to take the unusual step of sending the nomination to the full Senate without a favorable recommendation.

Trump said Wednesday he expects Paul to come through on Pompeo. The president called Paul and the senator agreed to meet with Pompeo, but Paul's spokesman said, "Nothing else has changed."

As for opposition by Democrats, Republican Cory Gardner, who chairs an Asia subcommittee, said in an interview that they "want to play partisan politics."

Despite meeting Pompeo on Tuesday, Gardner said he hadn't been briefed on the trip and was awaiting more information about it. Still, he said the fact that the meeting happened gave weight to Pompeo's testimony last week that the administration was committed to the "complete and verifiable denuclearization" of North Korea and sustaining sanctions pressure.

It is not unprecedented for U.S. intelligence officials to serve as conduits for communication with Pyongyang. In 2014, the then-director of U.S. national intelligence, James Clapper, secretly visited North Korea to bring back two American detainees. Clapper did not, however, meet with Kim, who has only in recent weeks emerged from international seclusion after taking power six years ago and super-charging North Korea's push to become a nuclear power. Kim met last month with China's president and is to meet South Korea's leader April 27.