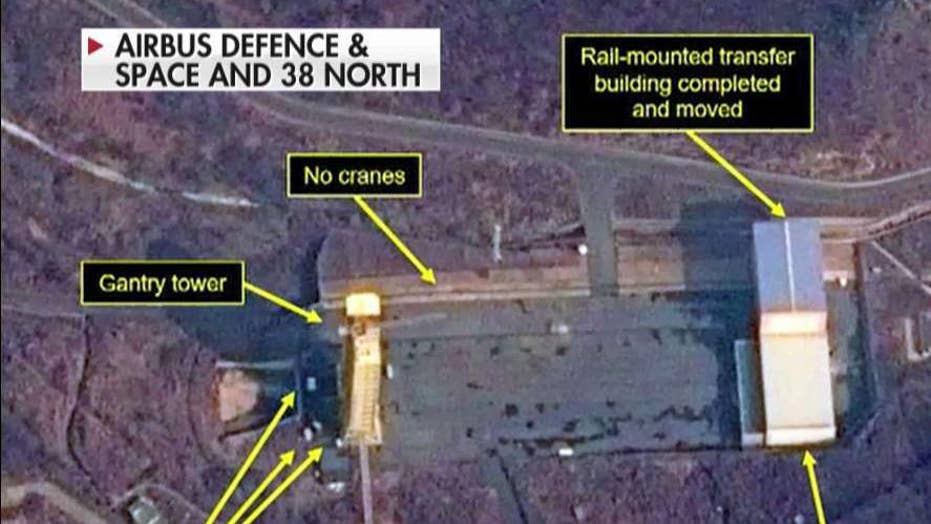 WASHINGTON – President Donald Trump said Thursday that he's a "little disappointed" by reports of new activity at a North Korean missile research center and long-range rocket site and that time will tell if U.S. diplomacy with the reclusive country will be successful.

South Korea's military said it is carefully monitoring North Korean nuclear and missile facilities after the country's spy agency told lawmakers that new activity was detected at a research center where the North is believed to build long-range missiles targeting the U.S. mainland.

Defense Ministry spokeswoman Choi Hyun-soo said the U.S. and South Korean militaries are sharing intelligence over the developments at the North's missile research center in Sanumdong on the outskirts of the capital, Pyongyang, and at a separate long-range rocket site. She did not elaborate on what the developments were.

Asked if he was disappointed in the new activity, Trump told reporters at the White House that he was "a little disappointed." Then he said time will determine the future of U.S. efforts to get North Korean leader Kim Jong Un to give up his pursuit of nuclear weapons in exchange for relief from sanctions stalling economic growth.

"We'll let you know in about a year," Trump told the reporters.

Briefing reporters at the State Department later, a senior U.S. official said that despite the new activity and the failure of last month's Trump-Kim summit in Hanoi to reach a denuclearization deal, the administration still believes it can reach and implement an agreement by the end of the president's first term. The official said it is important that progress be made quickly but that the goal is "achievable" by January 2021.

The official said that the U.S. is still trying to determine exactly what North Korea is doing with recent activity but that the administration will seek clarification from the North as well as intelligence analysts. The official said the Trump administration did not necessarily agree with nongovernmental analysts who believe the activity is a sign of North Korean anger following the summit. The official was not authorized to speak publicly to the state of negotiations with the North Koreans and spoke on condition of anonymity.

Trump said on Wednesday that his relationship with Kim remained "good" even though Trump walked away from negotiations at their high-profile meeting in Vietnam, saying the North's concessions on its nuclear program weren't enough to warrant sanctions relief.

Trump has favored direct talks with Kim, but the next stage of negotiations is likely to be conducted at lower levels. Trump's envoy to North Korea, Steve Biegun, had lunch Wednesday at the State Department with his counterparts from Japan and South Korea. The South Koreans have proposed semiofficial three-way talks with the United States and North Korea as it works to put nuclear diplomacy back on track.

Suh Hoon, the director of South Korea's National Intelligence Service, told his nation's lawmakers in Seoul that North Korea was restoring facilities at a rocket launch site it had dismantled last year in a goodwill measure.

Some analysts think the work is a signal that Kim is getting ready to conduct more tests, but others suggest he's just registering his disappointment that no agreement was reached at the summit. Trump himself added to the confusion, saying his administration had a hand in the report on Sohae being made public.

"It's a very early report. We're the ones that put it out," Trump said without elaborating.

Joel Wit, a North Korea proliferation expert who helped negotiate with North Korea in the mid-1990s, said the new work at Sohae is Kim's way of showing that he's "getting impatient with lack of progress in negotiations."

"We have to watch to see what else happens," Wit said. "It's a space launch facility and has been used to send satellites into space. ... Problem is, some of the technologies are the same."

He said there is no evidence that North Korea's work at the site signals Kim is preparing to test another intercontinental missile. He said North Korea has never tested an ICBM at Sohae. "Preparations for any launch would require a wide range of activities not observed at the site," Wit said.

Trump and Kim, who also met in Singapore last year, have not said if there will be a third summit. For now, discussions with North Korea will be conducted by their subordinates. Biegun, the U.S. envoy to North Korea, gave members of the Senate Foreign Relations Committee a classified update Tuesday afternoon on Capitol Hill.

Committee Chairman Jim Risch, R-Idaho, said that Biegun has a vision of where the U.S. wants to take the talks and that progress was made in Vietnam.

There's no framework agreement "to put the details on it yet," he said. But he added: "The differences have been narrowed."

Less upbeat, Committee member Edward Markey, D-Mass., said he's worried that future satellite launches at Sohae could help Kim further his work on ballistic missiles to threaten the U.S. and its allies with a nuclear attack.