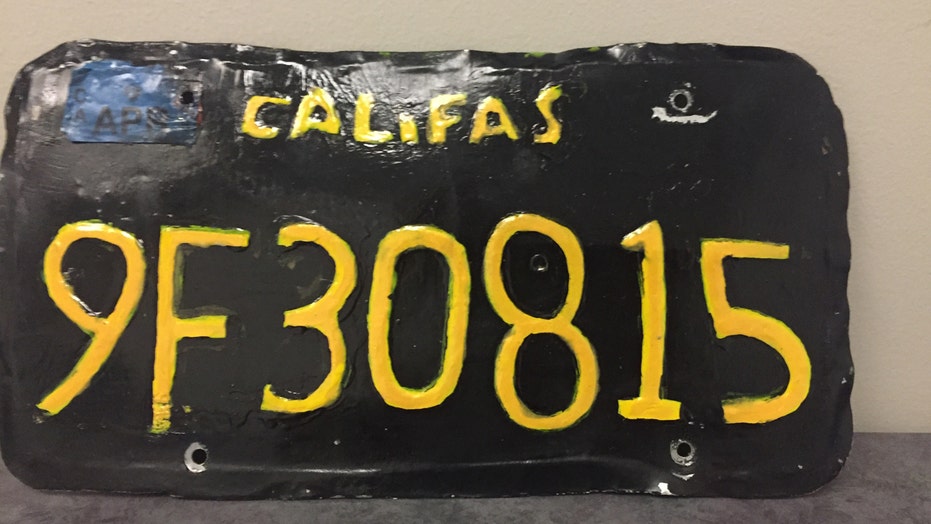 A fake vintage license plate using a slang term for California caught the attention of a motorcycle officer and ultimately led to the arrest of a truck driver earlier this week, officials said.

The Ventura County Sheriff's Office said Monday the counterfeit license plate reading "Califas" instead of California prompted an officer to stop a tractor-trailer in Moorpark.

The plate appeared to have a black background with yellow lettering, similar to the California Legacy Plate -- but with the state name wrong.

"Califas" is a Spanish slang term or nickname for California, according to KABC.

A fake license plate that read "Califas" with black background with yellow lettering that caught the attention of a motorcycle officer. (Ventura County Sheriff's Office)

Senior Deputy David Anaya said in a news release during the investigation, the driver appeared to be under the influence of drugs.

The driver, who was not identified, was arrested for driving under the influence, possession of methamphetamine, being an unlicensed driver, and having an active warrant for his arrest, according to the sheriff's office.

The truck also had to be towed from the scene because it was "unsafe to be driven," Anaya said. Officials did not specify when the incident took place.

Last year, deputies issued 983 traffic and parking citations for commercial truck violations and arrested several drivers for a variety of offenses including driving under the influence of alcohol or drugs, possession of false driver’s licenses or vehicle registrations and due to outstanding warrants.