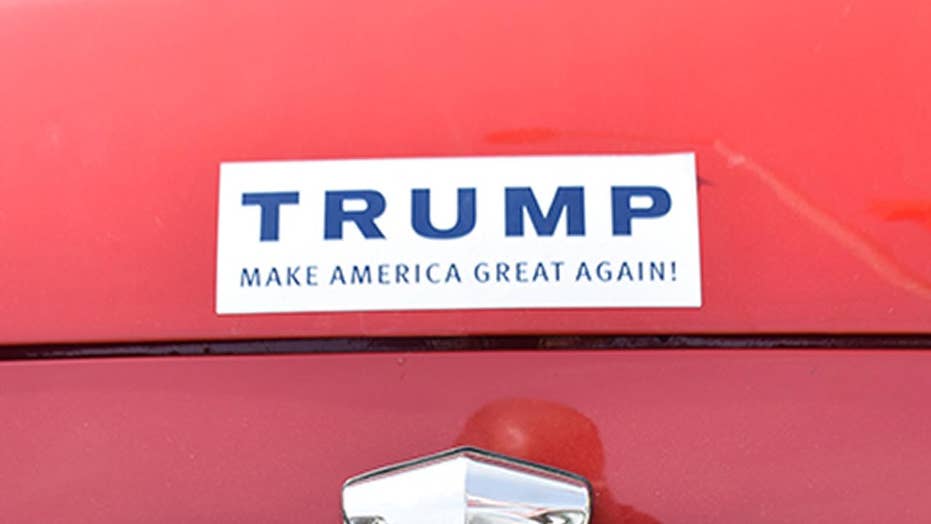 Truck set on fire because of pro-Trump stickers, owner says

A truck adorned with several stickers supporting President Trump was reportedly set ablaze and vandalized with spray paint outside a bar in Washington state, in what owner Johnny MacKay believes was a targeted attack.

A truck adorned with several stickers supporting President Trump was reportedly set ablaze and vandalized with spray paint outside a bar in Washington state, in what the owner believes was a targeted attack.

"If you say anything that someone doesn't like, you are ultimately a target," Johnny MacKay told KOIN-TV of Portland, Ore. "You're automatically the enemy and they have to hurt you."

After having a few drinks at the bar in Vancouver, Wash., MacKay told the station he decided to take an Uber home and leave his truck overnight in the parking lot. He said he left his vehicle under a light in hopes that it would discourage anyone from trying to break in.

The truck had two stickers on the bumper in support of President Trump, one of which read: “TRUMP 2020.”

"I literally just put them on this weekend," MacKay, who did not vote for Trump but supports the Oval Office, told the station. "If I would've known somebody would've taken politics this far -- I saw them, I thought they were funny and apparently somebody didn't get the joke."

Randy Sanchagrin, who lives across the street from the bar, told the station he ran outside after hearing an explosion to see the truck engulfed in flames.

"All of a sudden I hear a loud bomb and the windows shake," Sanchagrin said. He had his sister call police.

A video posted to Twitter showed flames spouting from the truck, and the charred aftermath.

MacKay was shocked the next morning to find his truck destroyed, as he said the “tires were melted, the windows were shattered.”

The word “Trump” appeared to be spray-painted in large white letters across the body of the vehicle.