Tropical Storm Isaias knocked out electricity and caused flooding and landslides in Puerto Rico and the Dominican Republic Thursday, following forecasts that predicted the storm would morph into a hurricane, as it moves toward the Bahamas and the East Coast of the United States.

The storm's maximum sustained winds of 60 mph sent rivers of water flowing down the streets in Puerto Rico, The Associated Press reported.

Trees and telephone lines were also reportedly toppled and the National Guard had to rescue at least 35 people, including two newborn babies.

"Everyone is in a constant state of emergency," Marieli Grant of Mercy Corps told The AP. 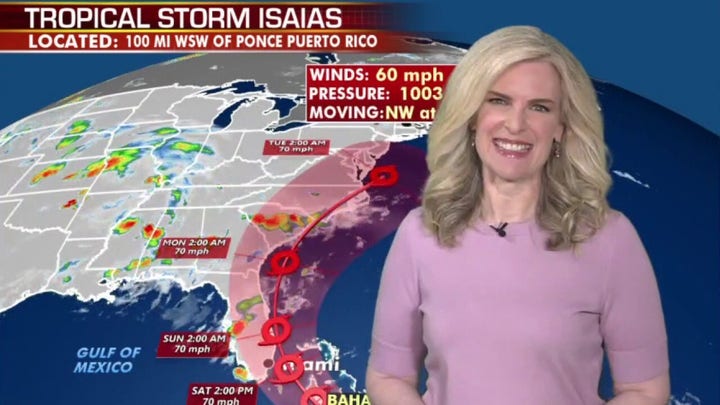 Isaias was centered about 250 miles southeast of the southeastern Bahamas on Thursday afternoon, according to the U.S. National Hurricane Center.

Forecasters believe it could be near the central Bahamas by Friday and could potentially move near South Florida by Saturday.

The U.S. should prepare for “impacts from winds, heavy rainfall and storm surge” as Isaias heads along its forecasted path toward the East Coast, the Center warned on Thursday.

“There is a risk of impacts from winds, heavy rainfall, and storm surge along portions of the U.S. East Coast beginning this weekend in Florida and spreading northward to the Carolinas and southern mid-Atlantic states early next week,” the advisory.read.