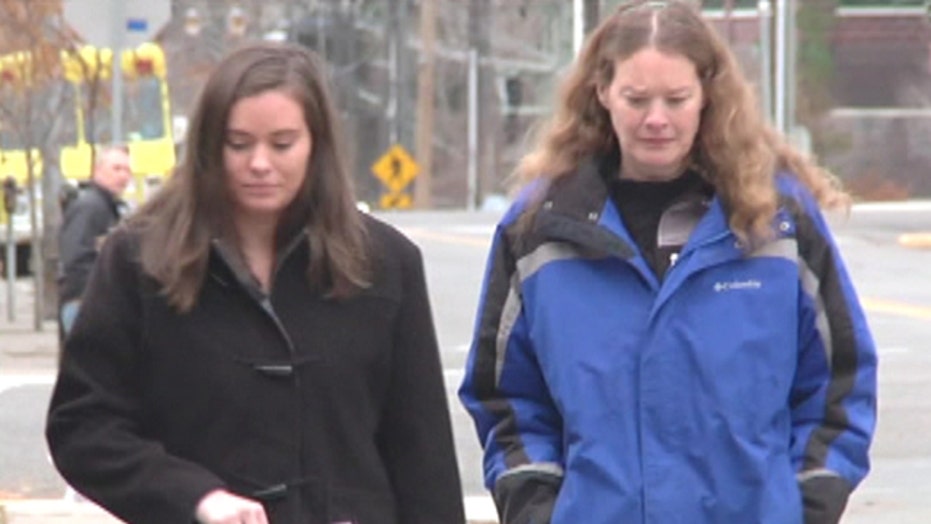 Trial under way for newlywed accused in husband's death

MISSOULA, Mont. – Cody Johnson was head over heels for his new wife, but Jordan Graham was having serious doubts that came to a head when Johnson fell to his death during an argument on a steep cliff in Glacier National Park, prosecutors said Monday.

The murder trial of Graham, 22, began in U.S. District Court in Missoula. Federal prosecutors say the woman from Kalispell, Mont., intentionally pushed Johnson the night of July 7, just eight days after their marriage, then lied to family, friends and the police for days by saying Johnson disappeared after driving off with friends.

Graham has pleaded not guilty to first-degree murder, second-degree murder and making a false statement to authorities.

Assistant U.S. Attorney Kris McLean showed jurors a smiling Johnson posing for a picture, then minutes later put up a photograph of his body lying face-down in a pool of water at the bottom of a steep cliff below a popular spot in the park called The Loop.

"There were only two people on this cliff when the defendant pushed Cody Johnson off," McLean said.

McLean told the jury that because there were no witnesses, prosecutors would rely on the testimony of friends and relatives of the couple to show Graham's state of mind before and after Johnson's death to prove that she is guilty of his murder.

Andy Nelson, Graham's federal public defender, said Graham had finally worked up the nerve to talk to Johnson about her grave doubts about their wedding, but their argument ended in a tragic accident when he grabbed her during their fight and she pushed him to remove his hand.

"Arguing on this small ledge was like arguing in a phone booth," Nelson said. "Jordan lied because she was afraid no one would ever let her explain what happened on that ledge."

Prosecutors presented jurors with dozens of text messages between Graham and her friend from church, Kimberly Martinez, that documented how Graham's nervous excitement at the prospect of the wedding turned into despair over the week that followed.

Graham wrote in one text the day after the wedding that she was "completely second guessing everything right now." The day after that, she wrote that she couldn't pull herself together. A third message said she wished somebody would have asked her if the marriage was what she wanted, and that all she wanted was to be herself again.

"Something was wrong," Martinez told the jury. "I couldn't tell if she was unhappy or something happened."

Graham was a naive, immature and shy woman who deals better with the children she watched over as a nanny than with most adults, Nelson said. She was awkward around Johnson's friends, and she sensed they didn't like her, so she avoided them, the lawyer said.

They were married June 29, about two years after they started dating. Johnson's friend, Jennifer Toren, said he was crazy about Graham.

"He was willing to do anything for her," Toren said.

But almost immediately, Graham started having "the wedding blues," McLean said. That is when the text messages with Martinez intensified, and they showed she planned to confront him July 7 after church and dinner.

McLean said the couple took their argument to the park and descended below a retaining wall along the roadway to the ledge. There, Graham pushed Johnson in the back with both hands and he fell face-first over the cliff, McLean said.

She then drove home without seeking help and sent text messages to friends that planted stories about Johnson's disappearance and talked about her dance moves for an upcoming party, the prosecutor said.

She lied to his friends and her own family about his disappearance. She showed authorities a fabricated email from a person named "Tony" that said Johnson was dead and they should call off the search. The next day, she led authorities to his body, saying that she knew he liked to hike in that spot with his buddies, McLean said.

Graham's attorney said she was running from the reality of the situation that she had found herself in. In her naivete, she came up with a ridiculous, implausible story to deflect attention from herself.

"Jordan did not want to report this accident because she was afraid," Nelson said.

She finally admitted that she was with Johnson when an FBI investigator confronted her with a picture of Johnson's car with a man and a woman inside at the gates of Glacier National Park.

In that interview, she acknowledged her role in his death, though she said it was an accident, Nelson said.

U.S. District Judge Donald Molloy said he hoped to get the trial to the jury this week because he has a trial scheduled to start next Monday in Billings.