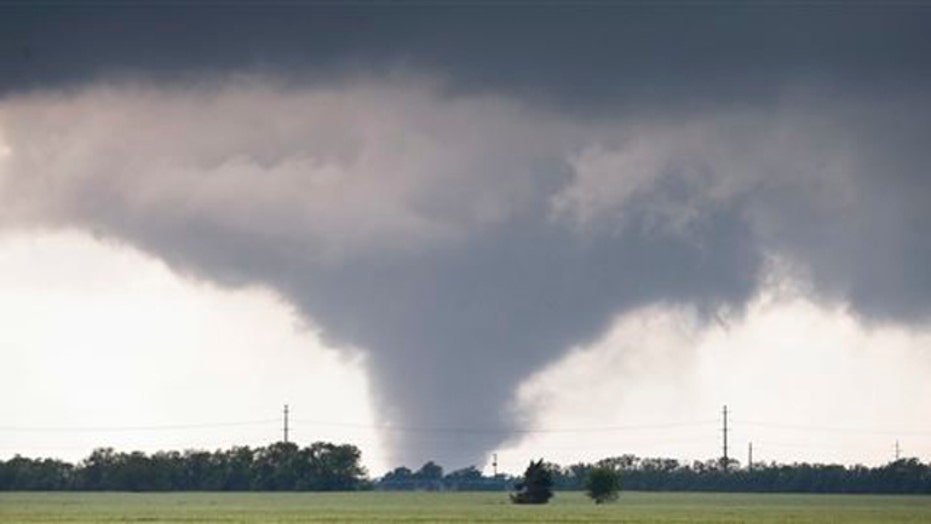 Millions in the path of tornadoes

Authorities say that one person was killed after at least two tornadoes touched down Saturday in northern Texas as forecasters upped the risk of sever storms for a large area of the state.

The fire chief in Cisco confirmed that one person was killed after a tornado hit the ground late Saturday near Cisco, about 100 miles west of Fort Worth. Authorities told Fox4News.com that at least two homes were destroyed in the twister that came after slow-moving thunderstorms had dumped heavy raim across the Dallas-Fort Worth area that caused street flooding and led to water rescues in some areas.

Another twister touched down in the town of Burkburnett, Texas, about 15 miles north of Wichita Falls, according to a police dispatcher who spoke to The Associated Press. She said the town set off its tornado siren just before 6 p.m.

The weather service on Saturday afternoon elevated to "moderate" the risk of tornadoes in the Dallas-Fort Worth metropolitan area and elsewhere across North Texas.  Eastland County, which was part of the enhanced zone, was pelted with 3-inch hail as the storm rumbled through.

"As expected, the environment in North Texas is particularly favorable (for tornadoes)," said Bill Bunting, the chief of operations at the Norman, Oklahoma-based Storm Prediction Center.

Storms also brought heavy rain and quarter-sized hail to parts of southwest Oklahoma on Saturday afternoon, but meteorologists said there was so much rain -- and so little sun -- that the tornado threat there lessened throughout the day. Parts of western Kansas also were bracing for severe storms.

But the threatening skies stretched beyond the Plains states, as twin weather systems stretching from the Carolinas to California produced an unseasonably early tropical storm in the Atlantic and a late-season snowstorm in the Rocky Mountains. Tropical Storm Ana's forecast track is expected to go near the coasts of North and South Carolina on Sunday.

Meanwhile, up to 5 inches of snow was possible in the Nebraska Panhandle this weekend, and parts of South Dakota could receive between 12 to 24 inches of snow, according to the weather service.