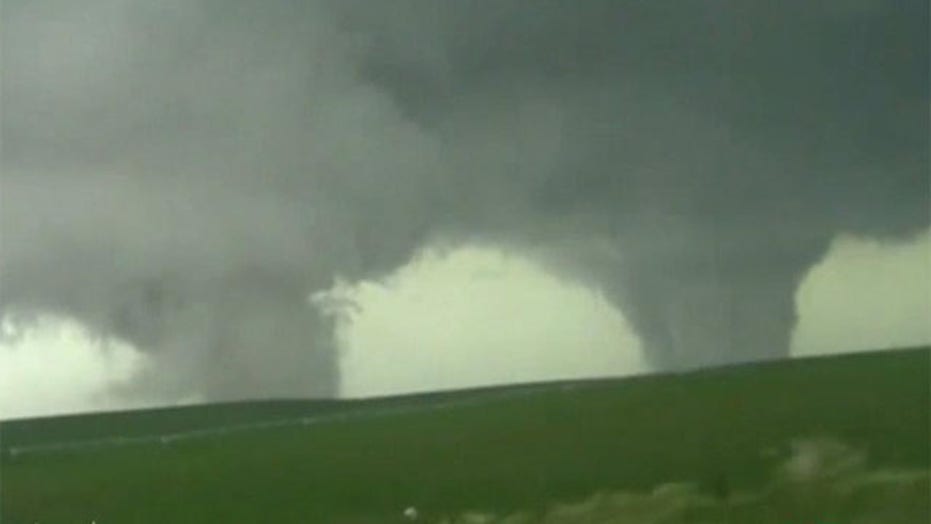 Residents of the northeast Nebraska town of Pilger were set to begin a massive cleanup operation Tuesday after a deadly tornado swept through the area, killing a 5-year-old and a motorist and injuring 19 others, while demolishing more than half the town's structures.

The National Weather Service said two twisters touched down within roughly a mile of each other. Emergency crews and residents spent the evening sorting through demolished homes and businesses in the town of about 350, roughly 100 miles northwest of Omaha.

"It was like God dragged two fingernails across the land," Gregg Moeller, who works with the Wisner-Pilger school system told The Omaha World-Herald.

The child's death was confirmed by the Stanton County Sheriff’s Office late Monday.

"It was like God dragged two fingernails across the land"

Authorities said the first tornado touched down around 3:45 p.m. and downed several power lines before it leveled a farmhouse. Then a second tornado was spotted southwest of Pilger. Shortly afterward, the town suffered a "direct hit" that leveled several buildings, including the Fire Department building.

"Houses are plumb gone," Stanton County Commissioner Jerry Weatherholt told the Associated Press. "The co-op is gone, the grain bins are gone, and it looks like almost every house in town has some damage. It's a complete mess."

Nebraska Gov. Dave Heineman declared a state of emergency, and the National Guard was preparing to deploy to assist local emergency responders and help with the cleanup.

Pilger was evacuated for the night, and the Nebraska State Patrol closed all roads into town. The sheriff's office said residents would gather at a staging area around 7:15 a.m. Tuesday, where law enforcement would then escort them back into town.

Jodi Richey, a spokeswoman for Faith Regional Health Services in nearby Norfolk, said one person died and 16 others were being treated at the hospital. Hospital officials initially described those patients as being in critical condition, but said later that some had been released after treatment.

Providence Medical Center in nearby Wayne treated three tornado patients, including two who had lacerations, hospital spokeswoman Sandy Bartling told the Associated Press. Two were released Monday evening, and the third patient was in stable condition, she said. Stanton County emergency manager Sandy Goshorn told Fox News that the damage to the town of Pilger is "extensive."

He said in some areas everything is gone, even the trees. Goshorn also said officials are dealing with two hazardous material situations involving storage facilities for fuel, grains and corn. He said corn from the facilities is covering the town.

The storm was part of a larger system that started to track across the nation's midsection Monday afternoon. More stormy weather was forecast Tuesday in an area stretching from eastern Montana to New York. The Storm Prediction Center in Norman, Oklahoma, said powerful winds, large hail and a few tornadoes are possibly, particularly in Iowa, Wisconsin and northern Illinois.

Unger estimated that 50 to 75 percent of Pilger was heavily damaged or destroyed in the storm. The local school is likely beyond repair, he said. Unger said five people had to be rescued from a rural home day care northwest of Stanton. That home was hit just before the storm moved into Pilger.

Weatherholt said that the southern half of the town was completely leveled.

Most residents made their own arrangements, but some were taken to a shelter at Wisner-Pilger Jr.-Sr. High School in nearby Wisner. About a dozen residents had arrived at the makeshift shelter by 9:30 p.m., and school officials were expecting more to come later, said Wisner-Pilger Schools Superintendent Chad Boyer. The shelter will remain open to residents for as long as needed to offer food, water, showers and cots, he said.

"I just have to use one word -- devastation," Boyer said by phone from inside the school. "It's a tremendous loss all around the town. Certainly, our thoughts and prayers are with the community.

He said Wisner-Pilger Middle School, located in Pilsner, was heavily damaged by the tornado, but he hadn't seen it up close.

Officials won't know the intensity of the storms until late Tuesday at the earliest, after crews have examined the area, said Barbara Mayes, a meteorologist with the National Weather Service in Valley.

Mayes said the dual tornadoes were unusual because both appeared to have roughly the same strength. In most cases, she said, one tornado tends to be larger and more powerful than the other, and the bigger cyclone grows stronger as the smaller one weakens.

"It's less common for two tornadoes to track together for so long, especially with that same intensity," she said. "By no means is it unprecedented. But we don't see it often."