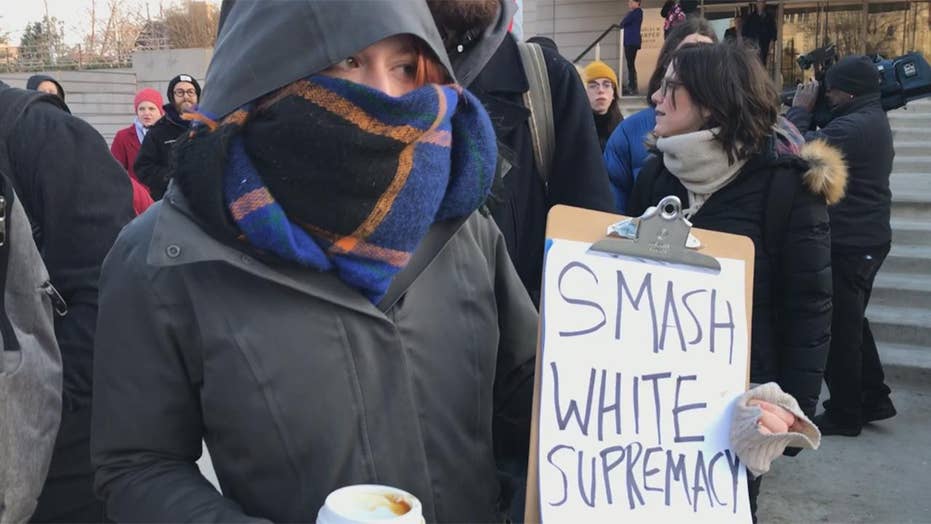 “We know that when Steve Bannon can saunter onto this campus and into this community unopposed that normalizes white supremacy,” Everett Pelzman, a member of the UChicago Socialists, shouted into a loudspeaker to the crowd of demonstrators that gathered in the bitter cold. “That is a direct threat to the lives of black, brown, queer, undocumented and immigrant folks on this campus and in this community.”

Dozens of demonstrators say they quickly organized the protest overnight after learning that Booth School of Business professor Luigi Zingales invited Bannon to appear on campus.

Zingales released a statement Thursday afternoon saying, in part, “I can hardly think of a more important issue for new citizens and business leaders of the world than the backlash against globalization and immigration that is taking place not just in America, but in all the Western world…Whether you agree with him or not (and I personally do not), Mr. Bannon has come to interpret and represent this backlash in America. For this reason, I invited Mr. Bannon to a debate on these issues with our faculty.”

Sam Joyce, co-chair of the University of Chicago Young Democratic Socialists, was a speaker at the protest and told Fox News the demonstrators stand in solidarity with marginalized groups. He said student protestors consider Bannon a white supremacist because Bannon was behind the president’s so-called “Muslim ban,” and because he had a section on his Breitbart website called “black crime.”

“I think there’s a clear line when someone’s promoting hatred, promoting violence,” Joyce said. “We’re not against conservative speakers in general we’re only against individuals like Steve Bannon who have pushed a message of racial division.”

Joyce said the school should only allow people to speak on campus who validate the humanity of every member of the university and argues that the University of Chicago is endorsing Bannon by providing the space and security for him to speak on campus.

Matthew Foldi, president of the University of Chicago Student Republicans, told Fox News he commends the student’s demonstration of free speech against Bannon—especially so early in the morning—but says the idea that the university should validate any speaker is “ludicrous.”

“In any realm that makes no sense. The school does not endorse everyone who speaks on this campus. Do they endorse the views of every student that goes here? More relevantly, do they endorse every professor that works here?” Foldi said during a phone interview.

Foldi said he personally invites all types of speakers on campus without hesitation or validation.

“We put it on ourselves to listen to liberal, far-left ideas because otherwise you are not learning anything,” he said. “This is the first time Bannon is making a public appearance since leaving Breitbart. It’s impossible to say there is nothing to learn here.”

Bannon, the fiery leader credited with spearheading a conservative movement across the country that led to the election of President Trump, played a key role during the Trump presidential campaign and was appointed to serve as strategist to the president until a turbulent departure from the White House last year. He stepped down as chairman of Breitbart earlier this year.

A date has not been set for Bannon’s UC appearance.

A crowd of protesters gathered in the bitter cold to demand the college rescind Steve Bannon's invitation to speak on campus. (Fox News)

A spokesperson for the University of Chicago told Fox News it’s standing by a statement it released in response to Zingales’ invitation to Bannon. The statement, in part, reads “any recognized student group, faculty group, university department or individual faculty member can invite a speaker to campus. We recognize that there will be debate and disagreement over this event; as part of our commitment to free expression, the university supports the ability of protesters and invited speakers to express a wide range of views.”

Near the beginning of the fall semester last year, the University of Chicago released a memo aimed at students to inform them that the school does not condone or endorse “safe spaces.”