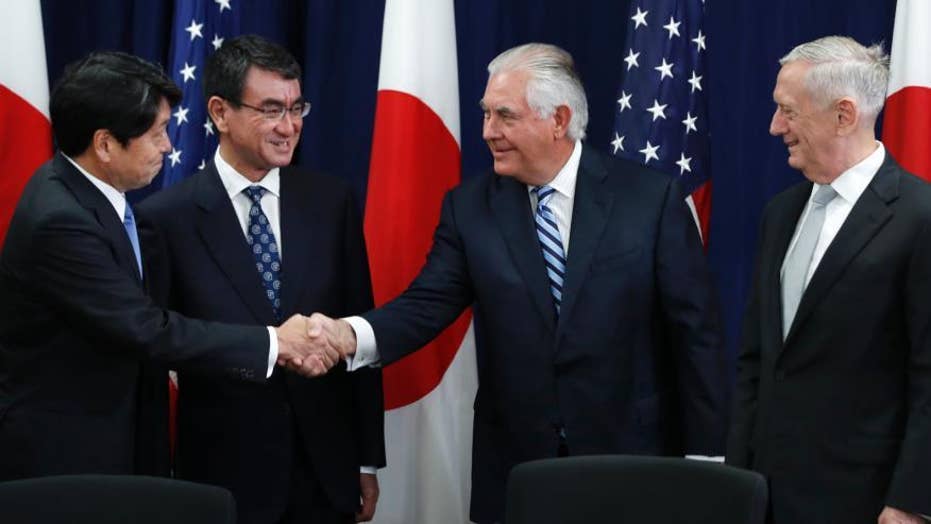 World leaders want US warning before attack on North Korea

Secretary of State Rex Tillerson stressed after security talks with close ally Japan that the U.S. seeks a peaceful solution to the standoff over North Korea's nuclear weapons program. But he said a U.S.-led campaign of economic pressure and diplomacy needs to be backed by potential military consequences.

Washington is "prepared militarily" to respond, if necessary, he said.

Tillerson spoke after he and Defense Secretary Jim Mattis held annual security talks with Japanese Defense Minister Itsunori Onodera and Foreign Minister Taro Kono at the State Department. Much of the discussion focused on North Korea, which also poses a threat to Japan.

Neither Tillerson nor Mattis responded directly to strategist Steve Bannon's argument in an interview published Wednesday that there's no military solution to the North Korean threat. But both Cabinet members sought to rebut the claim.

"In close collaboration with our allies, there are strong military consequences if DPRK initiates hostilities," Mattis said, referring to an abbreviation of the North's official name, the Democratic People's Republic of Korea.

Mattis said that if North Korea launches a missile toward Japan, the U.S. Pacific island of Guam, the United States or South Korea, "we would take immediate, specific actions to take it down."

North Korea's missile launches "must stop immediately," Tillerson said. Given the magnitude of the threat posed by the North's weapons development, he said any diplomatic effort "has to be backed by a strong military consequence if North Korea chooses wrongly."

"That is the message the president has wanted to send to the leadership of North Korea," Tillerson said, "to remind the regime of what the consequences for them would be if they chose to carry out those threats."

Trump last week pledged to answer North Korean aggression with "fire and fury." He later tweeted that a military solution was "locked and loaded," after leader Kim Jong Un was said to be considering a provocative launch of missiles into waters near Guam.

Tensions have since eased somewhat since North Korea said Kim doesn't immediately plan to fire the missiles. But fears of conflict remain as the U.S. and South Korea next week begin military drills that the North views as preparation for invasion, and as Washington seeks to stop the North's progress toward having a nuclear-tipped missile that could strike the continental United States.

Bannon's comments in his interview with The American Prospect appeared to call bluff on Trump's tough talk to North Korea last week.

"Until somebody solves the part of the equation that shows me that 10 million people in Seoul don't die in the first 30 minutes from conventional weapons, I don't know what you're talking about, there's no military solution here, they got us," Bannon was quoted as saying. Seoul is the capital of South Korea.

Bannon also called for a tougher U.S. stance on trade with China, saying the two powers were in an "economic war." He talked about purging rivals from the Defense and State departments to advance a more hawkish policy.

Bannon named the acting top U.S. diplomat for East Asia, Susan Thornton, as one official he wanted out.

At the start of Thursday's meeting, Tillerson pointedly shook the hand of Thornton after greeting the Japanese visitors.

State Department officials, speaking on condition of anonymity because they weren't authorized to comment publicly, said Tillerson went out of his way to do so to demonstrate his confidence in Thornton, a career diplomat.