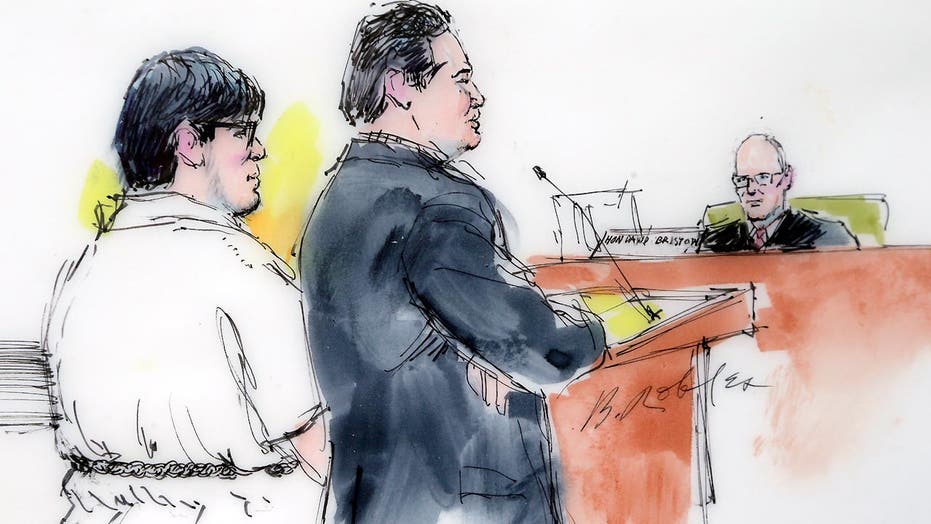 Enrique Marquez faces up to 50 years behind bars

The arrests don’t appear to bear a direct connection to the terror attack, but center on a 2014 marriage-for-citizenship scam allegedly carried out by Enrique Marquez and Mariya Chernykh.

“While investigating the terrorist attack, federal agents obtained official records showing that Marquez, a former neighbor of Syed Rizwan Farook’s, is married to Chernykh,” the U.S. attorney’s office said in a statement. “The investigation determined that Marquez agreed to marry Chernykh so she could obtain immigration benefits that were not available to her because she is a Russian citizen and did not have legal status in the United States.”

Chernykh paid Marquez to enter into the “sham marriage,” the US Attorney said.

Marquez is already in jail and awaiting trial for conspiring with one of the San Bernardino attackers, Syed Rizwan Farook, in terror plots that never materialized.

Federal court documents obtained by FoxNews.com tied to Marquez’s case show both he and Farook abruptly halted plans for a dual terror attack in 2012. In that assault, Marquez and Farook allegedly planned to use pipe bombs and two AR-15 rifles “to maximize the number of casualties” at Riverside City College, a nearby institution they attended, and on state Route 91, a busy freeway with few exits where motorists are frequently stuck in heavy gridlock.

Marquez is also accused of supplying weapons to Farook and his foreign bride Tashfeen Malik before the Dec. 2 attack, that also left 22 injured.

Marquez’s wife, Mariya Chernykh, 26, is charged with fraud and misuse of visa, permits and other documents. She’s also accused of perjury and two counts of making false statements to federal agents.

“FBI agents interviewed Chernykh as part of the investigation into the IRC terrorist attacks, and she allegedly made false statements that she lived with Marquez at Syed Raheel Farook and Tatiana Farook’s residence in Corona,” the US Attorney said.

The FBI said in a statement that Tatiana and Syed Raheel Farook “participated in the [marriage] conspiracy by, among other things, witnessing Marquez ad Chernykh’s wedding, taking staged family pictures of Maruqez and Chernykh” and other actions.

All three were indicted by a grand jury Wednesday on five counts and will be arraigned in court on Thursday.

The FBI's Joint Terrorism Task Force headed up the investigation with the help of Homeland Security Investigations, and eight local sheriff and police agencies.

U.S. Attorney Eileen Decker said Thursday’s arrests “open a new phase in the process of bringing to justice all individuals who allegedly committed crimes that were uncovered during our exhaustive investigation.”

Members of the FBI's Joint Terrorism Task Force “worked around the clock”, said Acting Assistant Director of the FBI’s Los Angeles Field Office James Struyk, following the December murders in San Bernardino, to ensure no loose ends were left to pose a threat to the community.

The FBI continues to look into the activities of Farook and Malik on the day of the attack and still have been unable to fill in an 18-minute gap of time after the attack and before the shootout that killed the couple.

FBI agents were reportedly unable to retrieve data from the two personal cell phones of Farook and Malik, because they were destroyed, and are still looking for a missing computer hard drive could contain key communications.

FBI agents were recently able to crack open Farook’s work cell phone after help from a private Israeli company, but have not reported their findings.