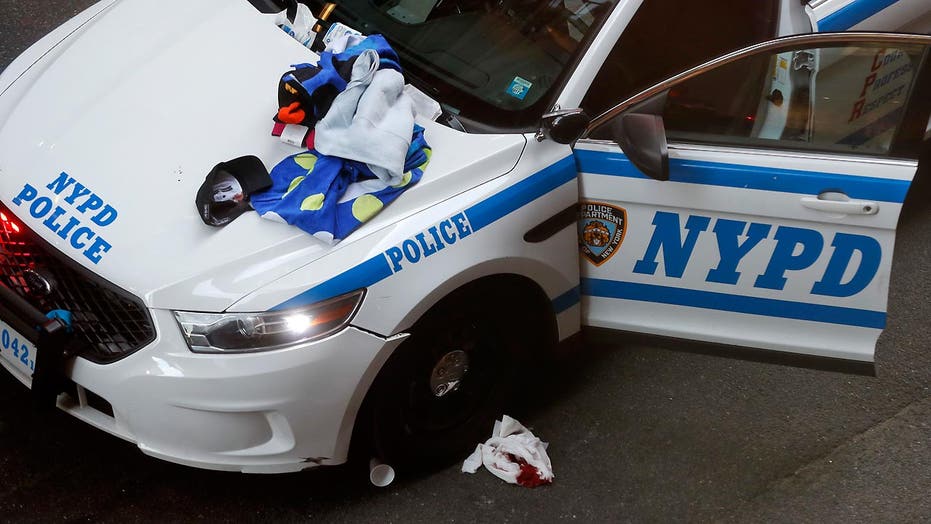 A man wielding an 11-inch meat cleaver gashed an off-duty NYPD detective Thursday evening before he was shot by other officers following a foot chase through midtown Manhattan.

Incoming NYPD Commissioner James O'Neill told a press conference that two other officers were injured in the incident, but did not disclose how those injuries occurred. The detective was in serious condition after reciving a six-inch cut from his temple to his jaw. The suspect was in critical but stable condition at a local hospital.

Fox Exclusive video obtained of man with butcher knife being shot by nypd in front of Manhattan mall. @FoxNews pic.twitter.com/Tdh2RRZ12I

A law enforcement official told Fox News special agents from the FBI's Joint Terrorism Task Force responded to the scene. However, the attack was found to have no ties to terrorism.

The shooting at Broadway and 32nd Street, just a block from Macy's department store and Madison Square Garden, closed down several busy streets at the height of the evening rush hour.

The drama began shortly before 5 p.m. when two officers confronted the suspect, 32-year-old Akram Joudah of Queens, as he was attempting to remove a boot from his car. O'Neill said Joudah drew the cleaver from his waistband and fled.

Other officers joined the pursuit, including the off-duty detective. Outgoing NYPD Commissioner Bill Bratton said that the detective was en route to Penn Station to catch a train home when he spotted the chase.

"He did what we would want any New York City police officer to do," Bratton said, "self-engage."

After officers unsuccessfully deployed a Taser, the suspect climbed on top of a police car and slashed at the detective, who had attempted to tackle him.

"They grabbed his arm to put handcuffs on him, he swung his arm, pushed away from them and then opened his car and pulled out this butcher knife and started swinging," witness Khadim Hanne told Fox News.

In response, three officers fired 18 shots at the suspect. Bratton, who is retiring Friday, said he believed officers acted appropriately.

"We have a character running down the street, waving a cleaver," he said.

"They shot until the threat was stopped," said O'Neill, who is succeeding Bratton as commissioner.

A bystander, Jonathan Schneier, said when he left work to get coffee he saw a balding man holding a cleaver, surrounded by a small group of officers yelling at him to drop the knife. One officer had a Taser out. Others had handguns.

"I give credit to the police officers. They gave him many opportunities," Schneier said. He said the man with the knife "did not look very stable."

Corey Melton, a photographer, was checking his phone on the street corner when he heard "a series of gunshots go off."

Photos he took show a gray, four-door sedan with bullet holes in the windshield and numerous police cars with their emergency lights on. His photos also show a man sitting on the ground handcuffed behind the car.

O'Neill said Joudah may have been living out of his car when the officers confronted him. He noted that the suspect had "a number of arrests on his record."