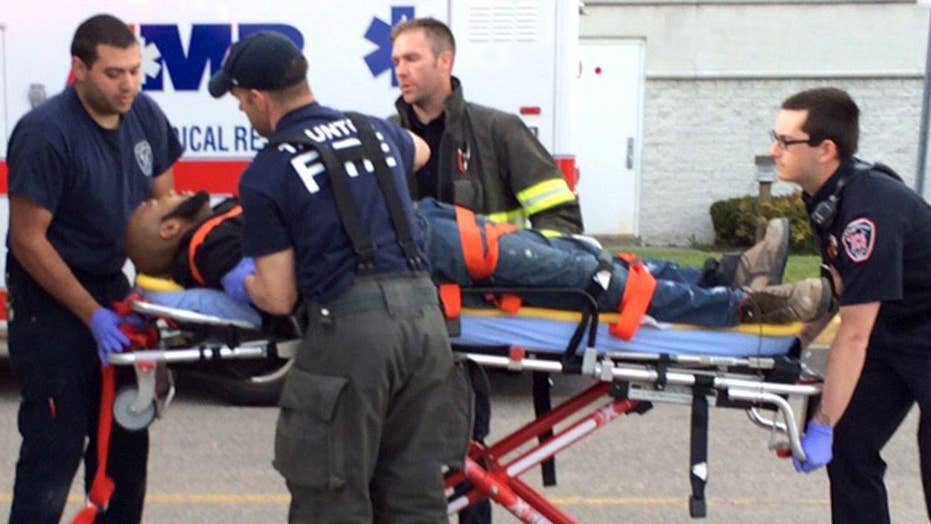 A mentally ill Massachusetts man stabbed four people, two fatally, at a home and a shopping mall south of Boston before he was shot and killed by an off-duty law enforcement officer, authorities said late Tuesday.

Bristol County District Attorney Thomas M. Quinn III told reporters that Arthur Darosa, 28, of Taunton, crashed a car outside a home in the city, walked inside and stabbed an 80-year-old woman and another woman. The 80-year-old was taken to a hospital, where she later died. The other woman was being treated for life-threatening injuries.

Neighbors told WFXT the women who were attacked in the home were mother and daughter.

"My son was here and heard the loud noise," a neighbord told the station. "An accident had happened, someone was coming out of the house. [He] realized that person had a knife."

Darosa then drove to the Silver City Galleria mall, where he crashed a car into the front of a Macy's store. Quinn said Darosa assaulted three people inside the store before running to a Bertucci's restaurant and stabbing two other people, including a 56-year-old man who later died. An off-duty deputy sheriff intervened at the restaurant and shot Darosa dead, Quinn said.

May 10, 2016: The suspect in the attacks at the Silver City Galleria mall in Taunton, Mass. is transported on a gurney into an ambulance by medical personnel. (Charles Winokoor/The Daily Gazette via AP)

None of the victims' names were immediately available.

Darosa's father and sister told the Boston Herald that he was mentally disturbed and suicidal. Kerri Devries told the paper that her brother had battled depression for years and had been taken to a local hospital Monday.

"He told them how depressed he was and how he didn’t want to live anymore and they still let him leave," Devries said. "I feel so sorry for those families and what happened, but he’s not completely to blame, he was sick.

"He went to the ER, they put him in a psych ward," she added. “All he kept saying was the devil was playing tricks on him and was going to poison the minds of his children."

The Silver City Galleria was briefly placed on lockdown during the attacks. Store worker Justin Pizzaro told The Boston Globe a mall security guard walked up to him shortly before 7 p.m. local time and told him to close the store gate.

Taunton, with a population of around 55,000, is located approximately 40 miles south of Boston.