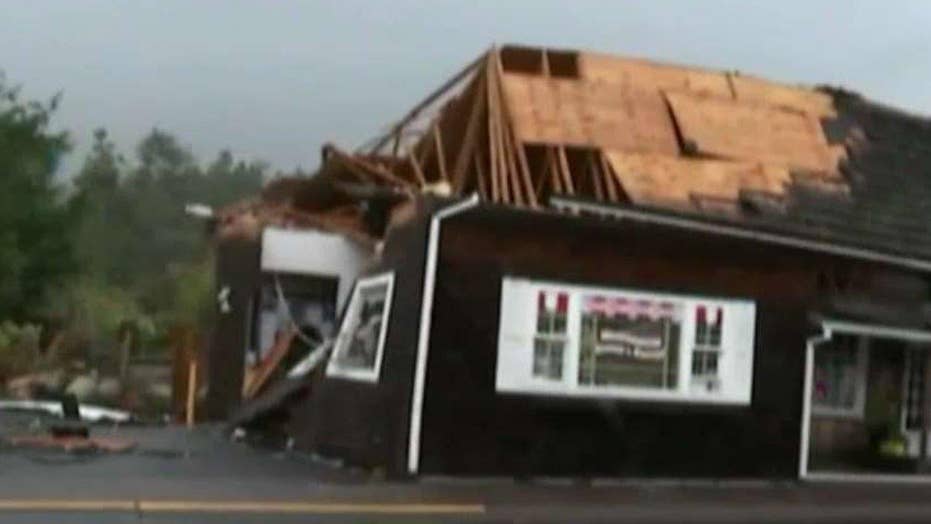 Bryan Llenas reports on how the impacted regions are responding

Thousands of people were without power as utility crews in the region prepared for what's expected to be an even rougher storm on Saturday.

In Seattle, a 4-year-old boy and his father were injured by a falling tree branch Friday. The Seattle Fire Department said the child suffered serious injuries and the father minor injuries.

The Coast Guard and other agency officials near Port Angeles, Wash., had made several trips to rescue 40 teenagers and six adults who became stranded at an outdoor recreation camp after they lost power and downed trees blocked their way out.

The National Weather Service in Portland, Ore., urged people to stay off roads as multiple streets in the city were flooded and impassable after heavy rains hit the area Friday evening.

The tornado was reported on the northern Oregon coast. Tillamook County Sheriff Andy Long said it touched down in the city of Manzanita about 8:20 a.m. There were no reports of injuries.

Debbie Harmon, owner of the Amanita Galley, said most of the damage is near the beach and downtown.

"It was a normal beach storm, which we get a lot of, and then out of nowhere the wind went 'whoooo,'" she said. "Suddenly the whole sky was filled with debris. It was just crazy. And then it just stopped."

The mayor declared a state of emergency — a necessary step for the small town 90 miles west of Portland to be eligible for federal disaster money.

Long said two businesses were destroyed and one home is uninhabitable. He says other homes have roof damage. The Red Cross opened a shelter for those affected.

Julee Ward, who lives between Manzanita and Nehalem, said she awoke to violent thunderstorms and an eerie, dark sky. Her husband went outside to check on things after 8 a.m. and called for her to come out.

"Behold there was this big tornado flying about a mile away from our house," she said. "There was debris flying everywhere ... you could see the debris up in the funnel."

Video shot by her husband showed a massive funnel spilling down from dark clouds.

"You could hear it howling too, which was the crazy part," she added.

The National Weather Service said another twister made landfall about 9 a.m. near Oceanside, Ore., but no damage was reported. A total of 10 tornado warnings were issued.

The heavy rain created dangerous conditions throughout the region , as drivers tried to see out rain-pounded windshields and navigate through standing water on roads.

At one point, 15,000 customers were without power in Seattle.

Portland had the rainiest Oct. 13 in its history. In addition, the National Weather Service says a 103-mph wind gust was recorded at Cape Meares.

In northern Nevada, winds gusting up to 76 mph fueled a wild fire that has destroyed at least 22 homes and charred 3 square miles of brush and timber in a rural valley between Carson City and Reno.

Meteorologists expect a lull before the remnants of Typhoon Songda, which wreaked havoc in the western Pacific days ago, hit the Pacific Northwest on Saturday. Forecasters say wind gusts as high as 70 mph could sweep through Seattle. Mayor Ed Murray urged residents to avoid the city's many parks during the wet weekend weather.

The U.S. Army Corps of Engineers was rushing to fix a 300-foot section of a rocky coastal retaining wall in La Push, Wash. The jetty had previously failed and the only thing remaining was a gravel berm, according to spokeswoman Patricia Graesser. A breach of the wall would expose the Quileute reservation, a Coast Guard station, and marina to direct Pacific wave action.

The same weather system is expected to affect Northern California, bringing rain, wind and coastal flooding to the San Francisco Bay Area through part of Saturday.

The storm also carried the potential for flash flooding in central Idaho, where nearly 300 square miles of mountainous terrain burned in a blaze earlier this year.